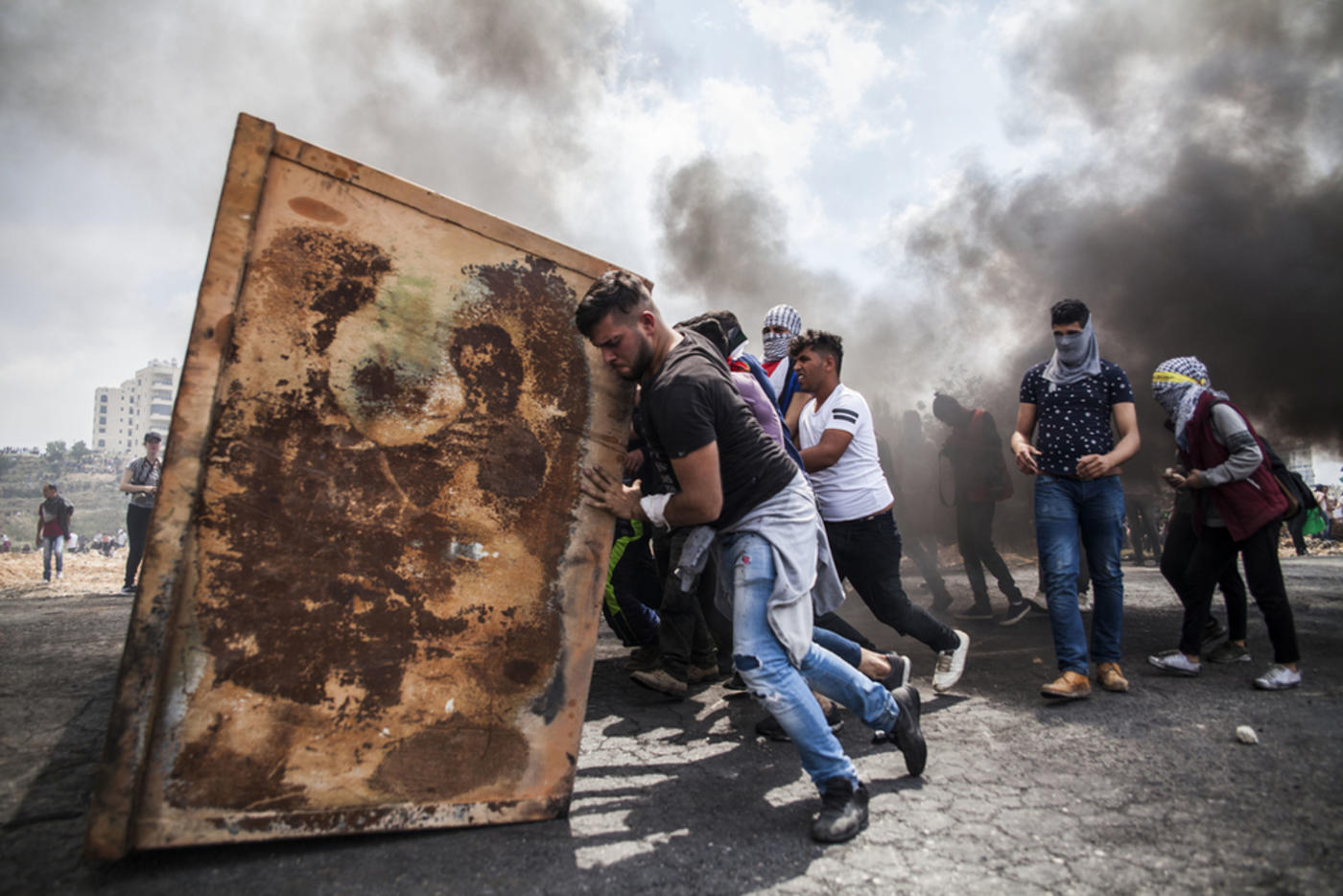 Tuesday marks the 70th anniversary of the Palestinian Nakba - or catastrophe - and the culmination of the Great March of Return protests along the Gaza Strip's frontier with Israel.

We'll be keeping you updated here throughout the day.

Areeb here from the MEE office in London. Following continued diplomatic tensions, and protests across the West Bank, and Gaza, questions continue to mount over the prospect of a UN investigation into the deaths of 62 people killed inside the Gaza Strip. Monday also marked the bloodiest day in Gaza since 2014.

Here are a few updates you need to know about the last two days:

From all of us here in London, America, and across the West Bank, Israel, and Gaza, thank you for tuning into MEE's live-blog.

Whilst Israel celebrated the opening of the US Embassy in Jerusalem, Palestinians were being killed in Gaza pic.twitter.com/aSHoZanpyD

Hundreds on the march in Tel Aviv against Gaza killings and siege. Police threatening arrests pic.twitter.com/STwHuNHHib

BREAKING: One Palestinian killed in central Gaza
4 years ago

During the address, Mansour questioned the "regard for Palestinians" and asked the UN Security Council "how many Palestinians must die before action is taken."

"A power that hides kilometres from the inhabitants from Gaza; Targeting them with air strikes, rocket strikes, and other heinous acts. They target unarmed civilians. Would you accept that?...Did these children deserve to die?

Israelis are expected to protest outside the office of the far-right Likud party in Tel Aviv to denounce the Israeli army's violent repression of demonstrations in Gaza yesterday.

"As the right-wing governing coalition fails yet again to prevent the latest round of violence in Gaza, we must stand up and demand a comprehensive political settlement that will ensure the restoration of Gaza and an end to the bloodshed," Israeli group Peace Now said in a statement.

The Palestine Solidarity Campaign is also planning a protest on Downing Street in London shortly.

LONDON - Buckingham Palace confirmed to Middle East Eye that Prince William's would go ahead with a controversial visit to Israel, despite ongoing violence in Gaza.

The visit, scheduled for next month, will be welcomed in Israel at a time when the royal family's profile is boosted by the marriage of William’s younger brother Harry to Meghan Markle this weekend.

Here is how the major Arab newspapers covered the March of Return protests in the Gaza Strip and the relocation of the US embassy to Jerusalem on 14 May. 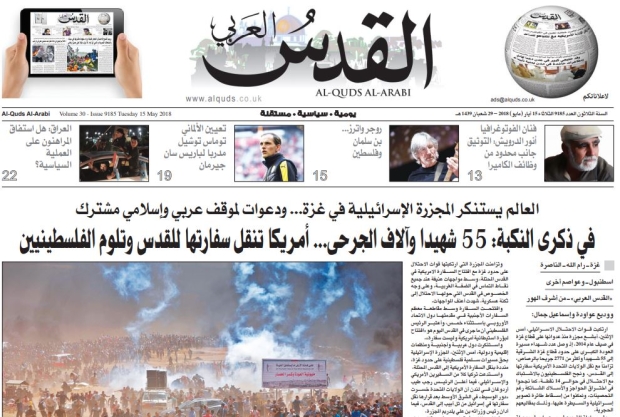 Al-Quds Al-Araby, published in London, titled its front page: "In the Nakba anniversary: 55 martyrs and thousands of casualties... The US is moving its embassy to Jerusalem and blames the Palestinians."

It said that the world "condemns the Israelis' massacre in Gaza... and calls for a united Arab and Muslim stance." 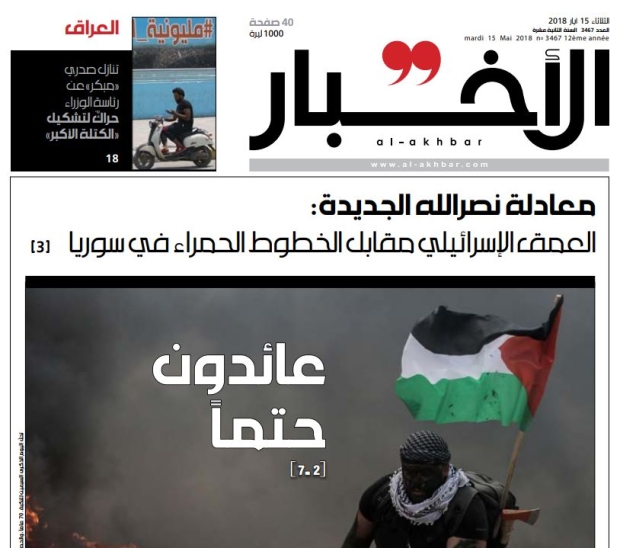 The Lebanese newspaper Al-Akhbar's front page read: "Definitely, we will return". It was illustrated with a Palestinian protester carrying his country's flag and masked with a Kufiya.

The paper added that the Palestinians did not actually return to their towns and villages, but that "50 souls of those who martyred returned." 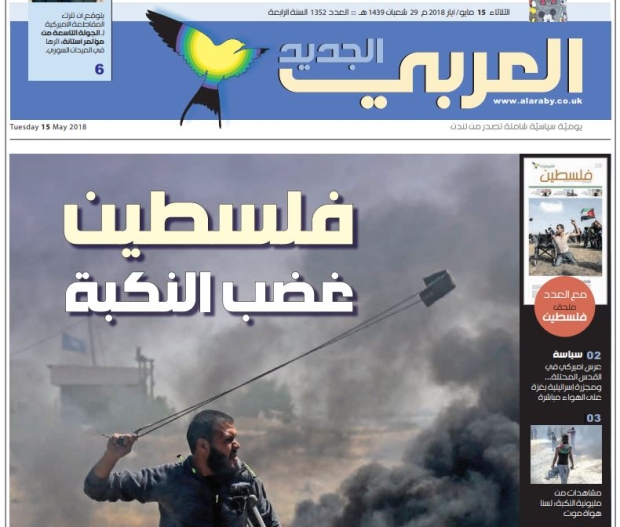 The newspaper described the Israeli army's killing of protesters in the Gaza Strip as a "massacre."

"Yesterday was like the end of days. On the 70th anniversary of the Nakba and the establishment of Israel, Israel committed a massacre in the Gaza Strip."

Asharq al-Awsat, a Saudi newspaper published in London, ran with the headline: "Embassy in Jerusalem.... and a massacre in Gaza". Pictures of Netanyahu with Jared Kushner and Ivanka Trump at the opening ceremony of the US embassy were contrasted with those of Palestinian protesters in Gaza.

Reports have just emerged that Israeli forces have detained at least six Palestinians who were near the fence separating Gaza from Israel.

The two individuals were out of reach of Palestinian ambulances when they were taken by Israeli soldiers, who dragged them to the Israeli side, Khoudary said.

She added that Israeli drones were dropping large quantities of tear gas in the area while Israeli snipers were shooting live bullets towards the crowd.

At a meeting in London with British Prime Minister Theresa May, Turkish President Recep Tayyip Erdogan has criticised Israel and the United States over Monday's deadly attacks on the Gaza border. Erdogan accused the Israelis of committing a "horrible massacre".

In response, Palestinians burnt tires and turned over skips in a bid to avoid being shot at by the Israeli forces.

“We came here because of Nakba but also because the US embassy moved yesterday. We want to send a message to Trump and the occupation government,” a 20-year-old protester told MEE.

UK calls for UN investigation into Gaza deaths
4 years ago

Karen Pierce, the UK's Permanent Representative to the UN, used her address at the emergency Security Council meeting to call for an independent UN investigation into the deaths in Gaza.

The British envoy condemned the deaths in Gaza on Monday and called for the easing of restrictions on movement, as well as calling for the funding of infrastructure on the Gaza Strip.