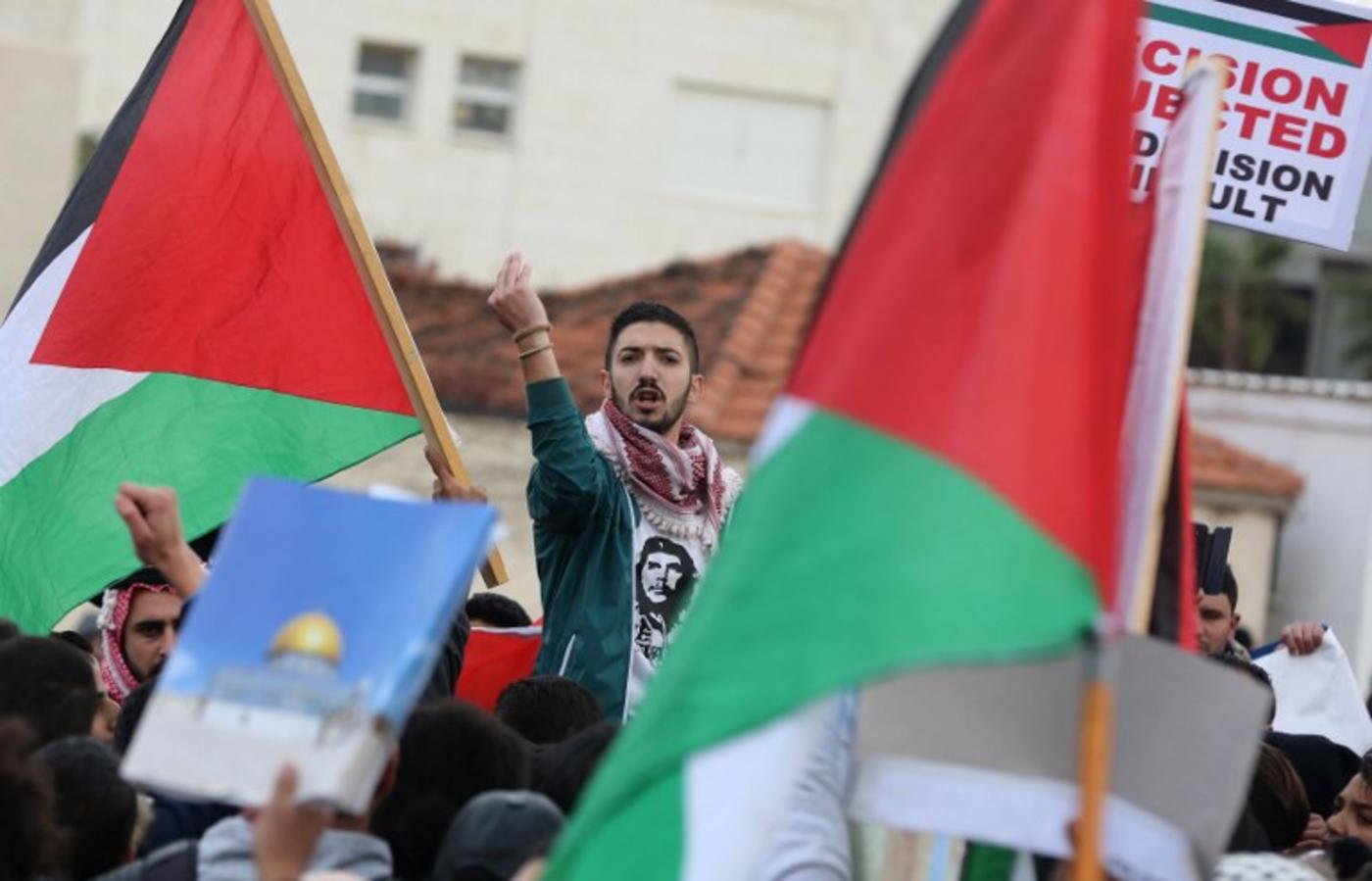 Photo: Protesters shout slogans and wave the Jordanian flag during a protest near the American Embassy in Amman against US President Donald Trump's decision to recognise Jerusalem as the capital of Israel on December 7, 2017.  (AFP)

Wave goodbye to this blog, say hello to a new one
5 years ago

Hello, we're moving over to a fresh new blog this morning, find it here, for all of Friday's developments.

Trump at the Western Wall
5 years ago

The weekend supplement of Yediot Aharonot put Trump's face on the iconic photo of Israeli paratroopers who reached the Western Wall in the 1967 war. pic.twitter.com/INDMOCKYfD

Hello from MEE's US team.

Here are the events that took place in the evening and overnight:

► Tillerson says peace is still possible between the Israelis and Palestinians.

► The Israeli army retaliated after a "projectile" fired from Gaza.

►Brother of Jordanian King criticised US embassy move as "irresponsible".

That's it for the night folks. We will get back with the latest developments tomorrow morning.

Secretary of State Rex Tillerson said there "a very good opportunity for peace to be achieved" between the Israelis and Palestinians after Trump's decision to move the US embassy to Jerusalem.

The President is very committed to the Middle East peace process. He has a team that he put in place almost immediately upon entering the White House," Tillerson said.

On December 6, 2017, @POTUS recognized Jerusalem, the ancient capital of the Jewish people, as the capital of the State of Israel; and reaffirmed the United States' commitment to achieving a lasting peace agreement between Israelis and Palestinians. https://t.co/XC6Ybzbtao

Israel retaliates against 'projectile' fire from Gaza
5 years ago
The Israeli army retaliated after a "projectile" fired from Gaza hit its territory Thursday, the army said, blaming Hamas which had called for an intifada after US recognition of Jerusalem as the Israeli capital.

"A short while ago, a projectile was fired from northern Gaza & exploded in southern Israel," the Israel Defence Forces said on its official Twitter account.

"In response to that fire & the projectiles fired at Israel throughout the day that fell short in Gaza, an IDF tank & an IAF (Israeli Air Force) aircraft targeted two terror posts in Gaza."

The military said Hamas was "responsible for the hostile activity perpetrated against Israel from the Gaza Strip" which the Islamist movement controls.

A senior Palestinian official in President Mahmoud Abbas's ruling Fatah party said on Thursday that U.S. Vice President Mike Pence, due to visit the region later this month, "is unwelcome in Palestine".

"In the name of Fatah I say that we will not welcome Trump's deputy in the Palestinian Territories. He asked to meet (Abbas) on the 19th of this month in Bethlehem, such a meeting will not take place," Jibril Rajoub said.

Aides for Abbas were not immediately available for comment.

Here's an evening round-up of the day's events:

► At least 31 people injured in clashes across the West Bank and Gaza during protests against the US embassy move.

► Two rockets were fired from Gaza into Southern Israel.

► Palestinian factions have called for a "Day of Rage" to take place on Friday.

►Protests took place across the Middle East and North Africa.

►Brother of Jordanian King criticised US embassy move as "irresponsible".

We will continue to update the live-blog throughout the night with the latest developments.

Prince Hamzah bin al-Hussein, a brother to King Abdullah, tweeted that the move was “an exceptionally irresponsible and dangerous step.”

The remarks represent the first time a royal of his generation has criticised US actions, according to one expert.

The Israeli military said on Thursday that two rockets launched at Israel from the Gaza Strip fell short inside the Palestinian enclave.

There was no initial claim of responsibility from any militant groups in the Gaza Strip for the launchings.

How the Arab media covered Trump's move
5 years ago

From calling America 'the root of evil' to not covering Trump's decision at all, here's a round-up of the front page coverage of four major Arab dailies: 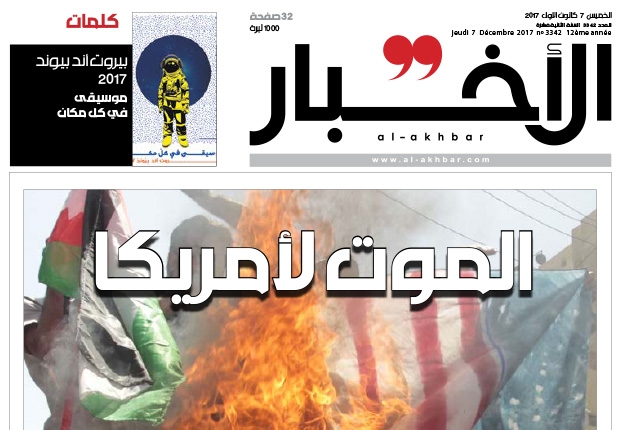 “Should the Arabs be aware that America, in short, is the root of all evil?,” writes the Lebanese newspaper which is close to Hezbollah.

“As for Israel, let’s leave it aside. Whatever has been said of Israel's 'power and superiority', is only a result of the American- British colonisers. Israel wouldn't survive a day without the protection, care and support of the West.”

“Today at this moment, those of us Arabs who surrender completely to America under the banner of 'peace', are nothing more than submissive cowards. While the 'free world' watches helplessly in the face of a mad cowboy, we should stand up with dignity and address the root of the problem not its symptoms. We have no choice but to raise our fists and slogans and shout, 'Death to America!” 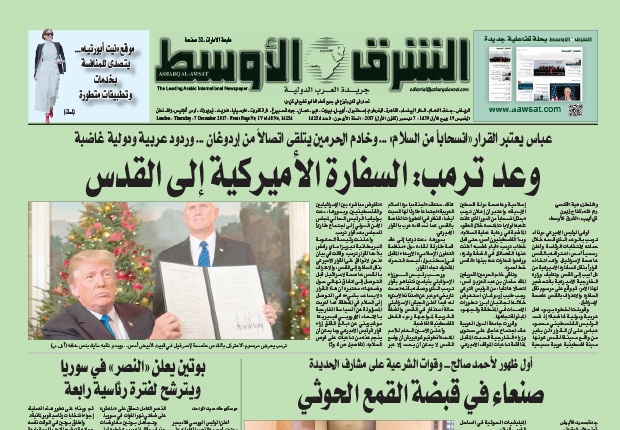 In a straightforward news report, Saudi-funded Asharq Al-Awsat wrote that “Trump fulfilled the promise he made in his election campaign and declared officially yesterday his recognition of Jerusalem as the capital of Israel”. 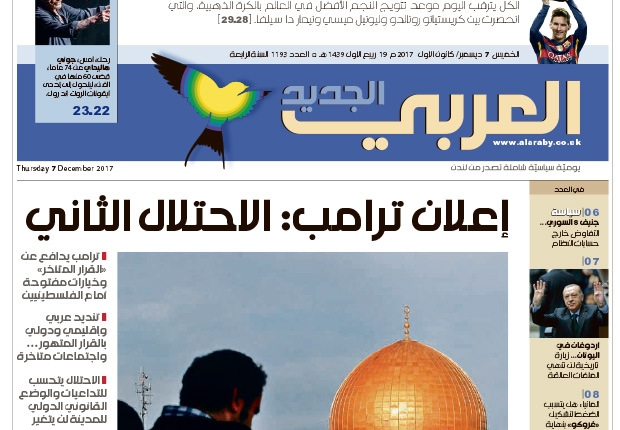 The London-based Qatari-funded Al-Araby Al-Jadeed writes: "There is a war on the Palestinian case to undermine the right of return of refugees and the Palestinian state."

But Palestinians have “loads of options” about how they react against Trump’s move.

Al Arab: 'Ahmed Ali in a race against time' 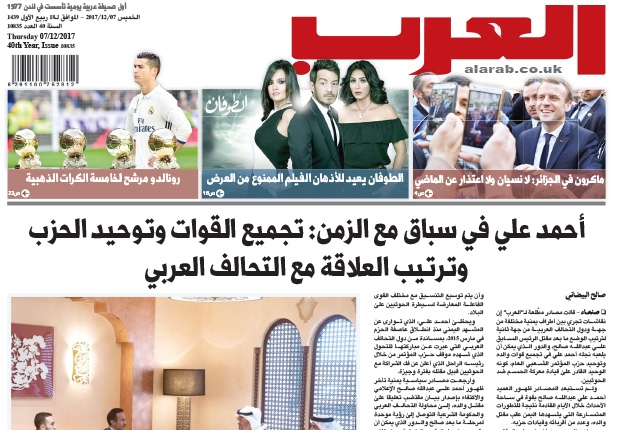 Nasrallah: 'Trump fired the last bullet on the peace process'
5 years ago

Hassan Nasrallah, the secretary-general of Hezbollah, said in a televised speech on Thursday that "Islamic and Christian holy sites in Jerusalem are under threat" after Trump's decision to move the US Embassy from Tel Aviv.

"One day we might wake up and find Al-Aqsa mosque being demolished because of the ongoing Israeli diggings underneath it."

He said that the US administration did not respect its Arab allies when it took this decision, and it did not abide by the international community consensus and UN resolutions regarding Jerusalem.

"Trump fired the last bullet on the peace process and he dared to announce its death," he said. 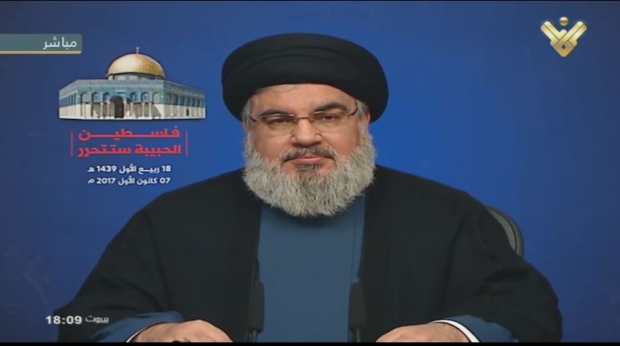 Palestinian-based Al-Quds news network confirmed there has been "renewed" rocket fire from the Gaza Strip towards Israeli residential areas near the Gaza border.

Rocket alarms have been set off in southern Israel, near Gaza. Significant in light of recent Trump announcement.

No initial confirmation of any hits in Israel, the military said.

India not swayed by US embassy move
5 years ago

India appears to remain neutral on Jerusalem's status and suggested that it will not change its stance based on America's decision to recognise it as Israel's capital.

“India’s position on Palestine is independent and consistent. It is shaped by our views and interests, and not determined by any third country,” a spokesperson says.

Canada to keep embassy in Tel Aviv
5 years ago

Canadian Prime Minister Justin Trudeau has confirmed that Canada has no intention of moving its embassy from Tel Aviv to Jerusalem.

Speaking in China during a visit, he said: “We will not be moving Canada’s embassy from Tel Aviv.”