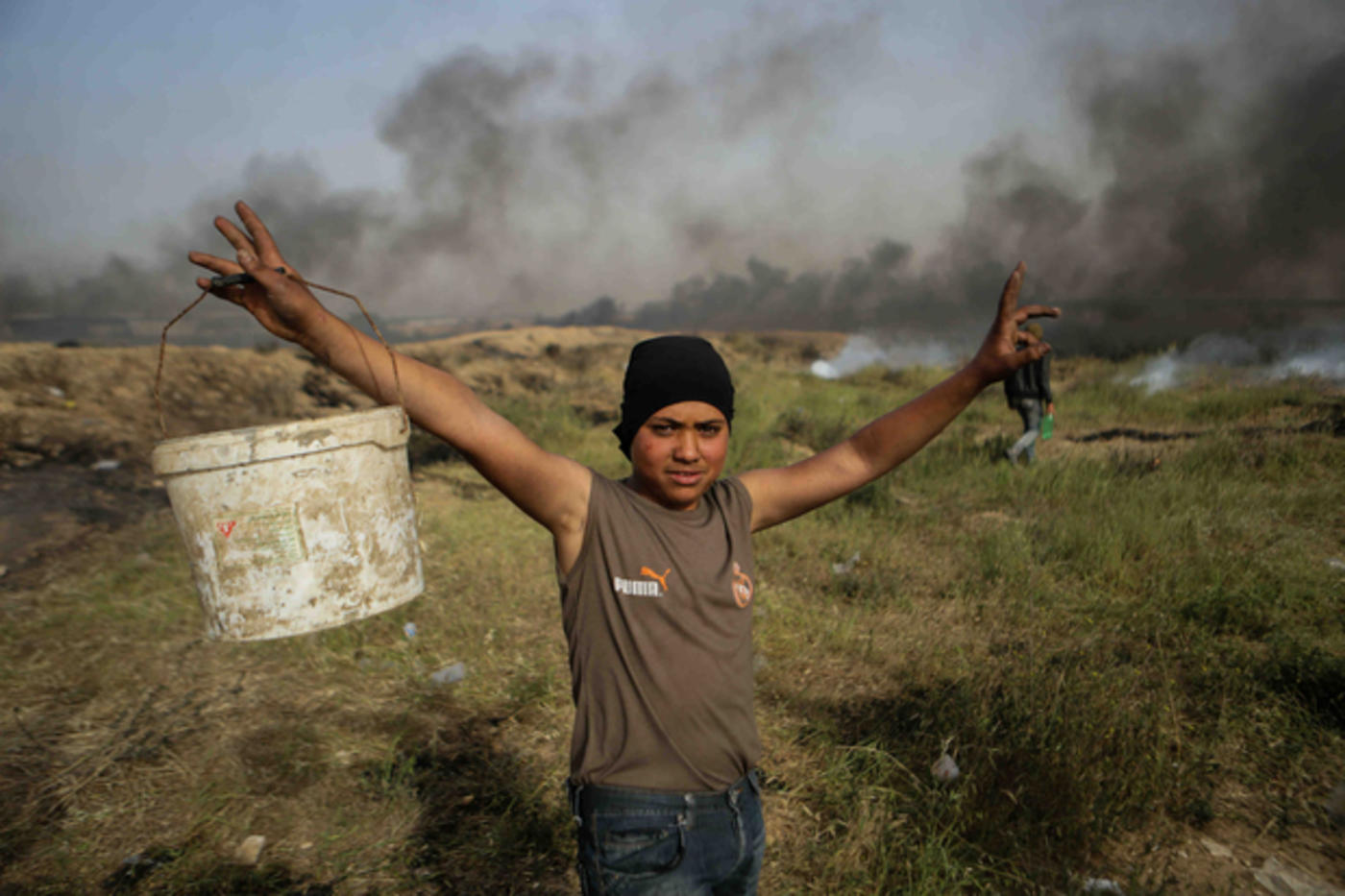 Protests have begun in the Gaza Strip today, one week since the beginning of the "Great March of Return" in the besieged enclave, where almost 1.3 million of the small territory’s two million inhabitants are refugees, demanding their right to return to their pre-1948 homes.

The six-week protest is set to end on 15 May - the 70th anniversary of the Palestinian Nakba (Catastrophe), in which more than 750,000 Palestinians were forcibly displaced by Israeli forces in 1948 Arab-Israeli war.

Demonstrators were anticipating similar levels of military repression this week, a day after Israeli Defence Minister Avigdor Lieberman said that "open-fire rules for the Gaza border will remain unchanged".

Photo: Hussein Mohammed Madi, 15, a day before he was killed by Israeli forces (MEE/Mohammed al-Hajjar)

The Israeli military's Arabic spokesperson tweeted on Friday a photo with Palestinian children in a sniper scope captioned, "We see you well."

Avichay Adraee, who earlier this week used a religious ruling by Saudi Muslim Saleh al-Fawzan to discourage Palestinian from participating in the Great Return March, warned Palestinians on Friday that they cannot hide from the Israeli army.

Translation: Those who think they can hide from the lenses of our forces are mistaken. We see you clearly, and we won't allow anyone to even try to compromise Israel's security. Stop the stupidity and putting yourselves in harm's way.

An 18-year-old Palestinian was killed east of Rafah city in the Southern Gaza Strip.

Alaa Yahya al-Zamli is the seventh Palestinian to have died from today's demonstration, according to the Ministry of Health.

Chloe here from Bethlehem. Here's an evening round-up of the day's events:

► At least 1,060 have been injured across the Gaza on Friday, including 293 wounded by live fire.

A sixth Palestinian was killed in today's demonstrations, the Gaza Ministry of Health reported.

33-year-old Mohammed Said al-Haj Saleh died after being injured in the chest and abdomen east of Rafah City in southern Gaza.

The Ministry added that at least 1,060 people were injured today, including 25 in critical condition

Gaza ministry of health: At least 780 injured
4 years ago

At least 780 Palestinians have been injured, by tear gas and live gunshots, during today's protests.

The latest estimate of injuries given by the Gaza Ministry of Health said that at least 372 people were taken to hospital for treatment.

A Palestinian Red Crescent Society spokesperson told MEE that the organisation treated 446 people on Friday, including 218 who were shot with live ammunition.

Two more demonstrators have been killed in Gaza by Israeli security forces, according to the Gaza Ministry of Health.

The Ministry identified them as Ibrahim al-Aar, 20, and Sedqi Abu Etiwi, 20. Both young men were from the Al-Nuseirat refugee camp and killed in central Gaza.

Hamas leader: 'wait for our great move, when we breach the borders and pray at Al-Aqsa'
4 years ago

Hamas leader, Yahya al-Sinwar, said that if Gaza exploded, it would be in the face of the Israeli occupation.

Sinwar, who was elected in February 2017 as the top leader of the movement that governs Gaza Strip, said that "the world should wait for our great move when we breach the borders and pray at Al-Aqsa mosque," in Jerusalem.

Speaking to protestors in one of the demonstration sites, Sinwar said that "Gaza would not let down the national aspirations of the Palestinian people."

Sinwar added that "we are following in the path of martyr Yasser Arafat in resisting the enemy,” referring to Israel, and "the conspiracy of besieging the Gaza Strip, with the hope that its residents would revolt against resistance, has failed."

Palestinians consider Yasser Arafat, a Palestinian national leader died in 2004, as a martyr, claiming that Israel poisoned him.

Protesters at the site chanted slogans, including “We are going to Jerusalem, millions of martyrs,” a chant that firstly chanted by Arafat in 2002 when he was under Israel military siege in his Palestinian Authority's headquarter in Ramallah.

Two more demonstrators has been killed in Gaza, the ministry of health said, identifying them as Ibrahim al-Aar, 20, and Sadqi Abu Etiwi, 20. Both young men were from al-Nuseirat refugee camp and were killed east of al-Bureij refugee camp in the central Gaza Strip. The ministry did not immediately report their cause of death.

In total, five Palestinians have been killed in today's protests, while a sixth died earlier today as a result of wounds sustained during last Friday's protest.

Earlier this afternoon, the Gaza Ministry of Health reported that two more journalists covering the Gaza demonstrations had been injured.

According to the Ministry, photographer Adham al-Hajjar and journalist Ezz Abu Shanab were both wounded in the leg.

As earlier reported in this blog, at least three other journalists were injured during Friday's demonstrations, including one by gunshot.

Israeli forces had used loudspeakers to call on journalists to evacuate from the demonstration areas.

Hussein Mohammed Madi, the teenager who was shot and killed with an expanding dumdum bullet by Israeli forces on Friday - according to the ministry of health in Gaza - had encountered MEE correspondent and photographer Mohammed al-Hajjar on Thursday, who had taken a picture of the boy and asked him for his name.

Madi was from the Gaza City neighbourhood of al-Sheikh Radwan, according to the Gaza ministry of health. He was 15 years old.

In photos: Noon prayers in Gaza
4 years ago

Earlier today, hundreds of Gazans performed Friday prayers at the protest tent encampments near the border with Israel. Here are a few photographs from northeastern Gaza from our MEE correspondent there.

A third demonstrator has been killed today in Gaza, Gaza's ministry of health reported, identifying the slain Palestinian as 15-year-old Hussein Mohammed Madi from Gaza City.

Mahdi was killed east of Gaza City by a dumdum expanding bullet in the abdomen, the Ministry added.

There have been no reports of casualties or injuries on the Israeli side on Friday.

An Israeli military spokesperson hinted that Israel might stop Palestinians from importing tyres into the Gaza Strip.

Avichay Adraee tweeted: "Don't complain if there might be a shortage of materials, such as tyres," adding that Palestinians allowed Hamas to "control them and their lives".

He posted a picture of a bus without tyres with the question: "Where are the tyres?"

Adraee appeared last week on a video recording before the 30 March protest, using Saudi fatwas as justification for arguing that Palestinians should not take part in Great March of Return protests against the occupation.

"Sheikh Ibn Uthaymeen stated that sit-ins and violent demonstrations are evil because they lead to chaos," Adraee said.

He also warned Palestinian women to focus on their "feminine" duties rather than protesting, saying that they should "focus on caring about their households and children to set a good example".

The Israeli army said in a statement on Friday afternoon that some 10,000 Palestinians were demonstrating in Gaza today.

"Approximately 10,000 Palestinians have been rioting in five locations along the border with the Gaza Strip," AFP quoted the statement as saying, adding that "several attempts have been made to damage and cross the security fence under the cover of the smokescreen created by the burning tyres that the rioters ignited".

The military also claimed that explosive devices and firebombs were thrown, but made no mentions of any injuries on the Israeli side.

Over the course of several hours at the #Gaza border today and Thurs, I haven't seen any protesters with guns or Molotov cocktails.

I've seen a tiny handful - single digits among thousands of young men - with axes, knives or heavy shears for cutting the fence.

"Troops are responding with riot dispersal means, including water cannons to put out fires, a huge fan to disperse the smoke, and fire in accordance with the rules of engagement," the army added.

The Israeli army usually uses the term "riot dispersal means" as a euphemism to describe anything from tear gas and sound bombs to rubber-coated steel bullets or live bullets.

While thousands of Palestinians are demonstrating in Gaza Strip as part of the "Great March of Return", Palestinians have also taken to the streets in the occupied West Bank in solidarity with the events taking place in the besieged coastal enclave.

According to Wafa, the Palestinian Authority's official news agency, Israeli forces fired smoke bombs and stun grenades at demonstrators in the southern West Bank city of Hebron, causing several to suffer from suffocation.

Meanwhile, Israeli forces detained three Palestinians, at least one of them a minor, during a protest in the city of Bethlehem. Israeli forces were firing tear gas intermittently in northern Bethlehem throughout the afternoon, according to an MEE correspondent there.

Wafa also reported that demonstrations were taking place in the Nablus-area villages of Beita and Kafr Qaddum, stating that at least one Palestinian had been injured by a rubber-coated steel bullet.

Meanwhile, a spokesperson for the Palestinian Red Crescent Society told MEE that protests also took places in the city of al-Bireh in the central West Bank, as well as in the village of Kafr Qaddum in the northern West Bank.

The PRCS spokesperson said eight people had been injured in total in both areas, either by rubber-coated steel bullets or due to excessive tear gas inhalation, without specifying which injuries had taken place where.

An Israeli army spokesperson told MEE several "riots" took place across the West Bank, but said they were not aware of any injuries, adding that "nothing (was) out of the ordinary".