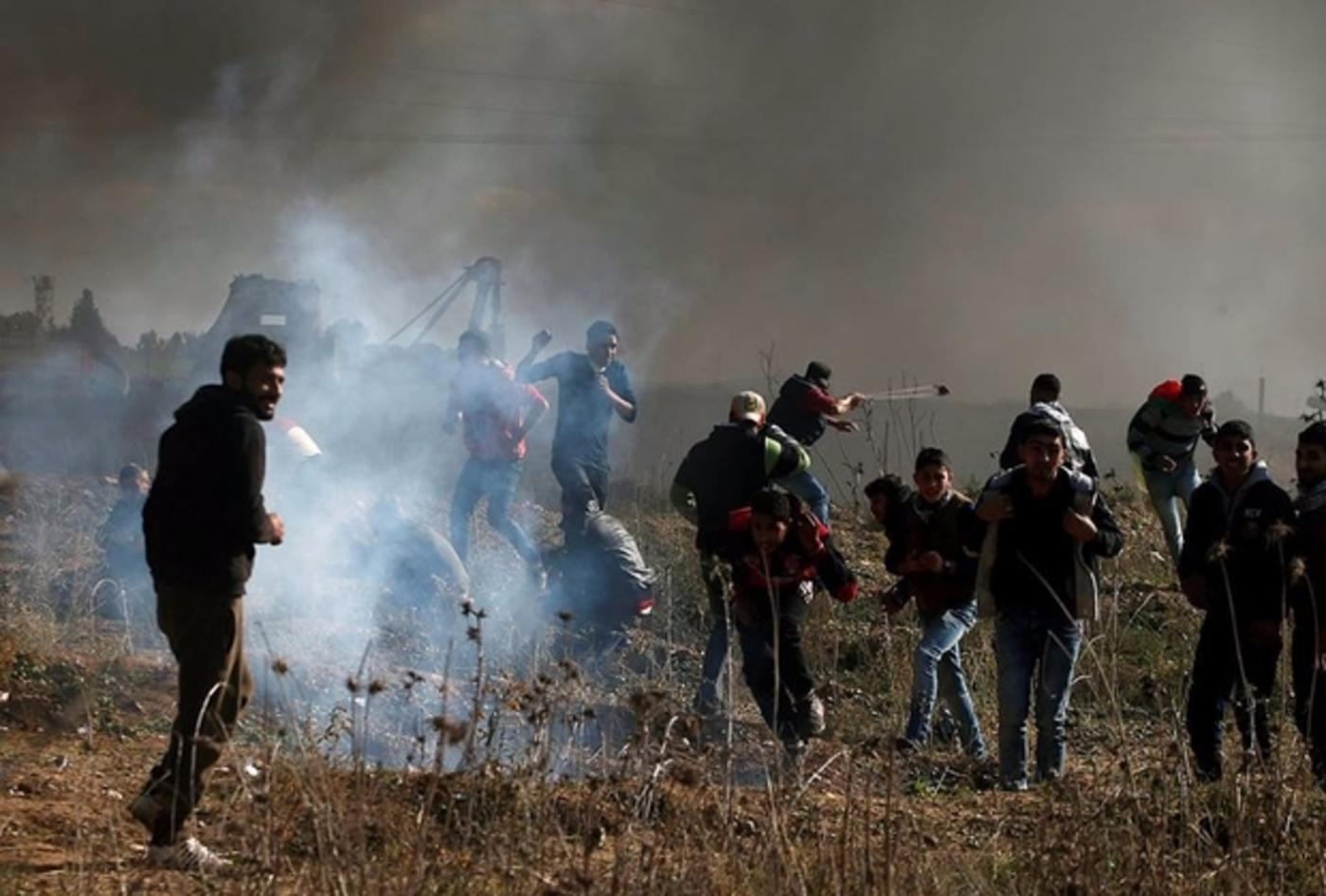 Here's a quick round-up of all the night's events as tensions intensified:

For analysis check out:

► Suraj Sharma's piece on why Iraqi Kurds have been silent on Trump's Jerusalem move.

► Noura Erakat on how Trump has ended the US double-speak on Middle East 'Peace'.

► Arwa Ibrahim on whether the US has always been an 'honest' broker.

Tomorrow morning, stay tuned for continuous updates from our correspondents back in London.

Bella Hadid, a fashion supermodel, reportedly travelled from a fashion show to join Palestinian protests in front of the US embassy in London.

Translation: Jordanians have always been the pulse of this (Arab) nation. The immense feelings they expressed today for Jerusalem, our number one cause, and the unparalleled unity and fraternity, reflect the resilience and dignity of our people. God bless Jordan and its people, as a shield for our nation and its children.

Thousands of demonstrators gathered in Amman on Friday to condemn US President Donald Trump’s decision to recognise Jerusalem as the capital of Israel.

Hundreds of Muslims attended Friday prayers in front of the White House to protest President Donald Trump's decision to recognize Jerusalem as the capital of Israel.

Responding to the call of American Muslim organizations, worshippers laid out their prayer mats at a park in front of the president's residence.

"Trump does not own a piece of soil of Jerusalem and Palestine. He owns the Trump Tower. He can give it away to the Israelis," Nihad Awad, executive director of the Council on American-Islamic Relations (CAIR), told AFP.

The president is "empowering Christian religious extremism in the US," he added.

BETHLEHEM - At 7pm, a number of teenagers from the Aida refugee camp in Bethlehem approached an unmanned watchtower along Israel’s separation wall, which wraps around Aida on two sides - and began lighting tires, wood and trash on fire. The fire reached almost to the top of the 9-metre tower.

Fifteen minutes later, two Israeli jeeps left the military base located on the eastern end of the camp and headed towards the engulfed tower. The teenagers saw the jeeps approach and began hurling rocks, prompting clashes to break out. The jeeps cornered the teenagers from the main road along the wall and into the alleyways of the camp, and began shooting gas to the middle of the camp.

“In 10 seconds, the jeeps fired around 50 or 60 rounds of tear gas,” Adham, a resident of the camp and eyewitness to the events, told MEE.

The jeeps then retreated back to the military base, refilled their supply of tear gas, and returned to the camp to shoot more gas canisters.

Adham estimated that more than 300 rounds of tear gas were fired into the camp over the course of an hour.

“This tear-gas isn’t normal. Something is different. It is stronger than usual, it stayed in the air for more than 2 hours,” Adham said.

He estimated that at least 12 people were taken to hospital, while several others were treated inside their homes.

Adham thinks the situation in the camp and in Palestine is going to stay like this for a while as a result of Trump’s announcement.

The events in Aida tonight came a month after Commissioner General for the United Nations Relief and Works Agency for Palestine Refugees in the Near East (UNRWA) Pierre Krähenbühl delivered a speech saying that “health experts suggests residents of Bethlehem’s Aida camp are exposed to more tear gas than any other population surveyed globally.”

The Palestinian Red Crescent said they treated 20 people inside their homes in the camp, while 5 were evacuated to the hospital. The ages of those treated ranged from young children to the elderly.

Yumna Patel is a freelance multimedia journalist based in Bethlehem. You can follow her on Twitter here: @yumna_patel

Akram Al-Wa'ra is a freelance videographer based in Bethlehem. You can follow him on Twitter here: @akramalwaara

Gaza's health ministry says that a person died after Israeli launched strikes in retaliation to rocket fire, bringing the death total to two in both the West Bank and Gaza.

The health ministry in Gaza said that 10 people were wounded, suffering what it described as light to moderate injuries.

Israel's military said in a tweet that they targeted a "Hamas training ground" and "ammunition warehouse".

In response to the projectiles fired at Israel from Gaza earlier today, IAF aircraft targeted a Hamas training compound & an ammunition warehouse in the Gaza Strip

Here's a quick round-up of all the day's events as tensions intensified throughout the day:

►300 Palestinians were reported injured across West Bank, Gaza and Jerusalem during 'day of rage'

► Tens of thousands across the globe came out against Trump's Jerusalem decision.

For analysis check out:

► Suraj Sharma's piece on why Iraqi Kurds have been silent on Trump's Jerusalem move.

► Noura Erakat on how Trump has ended the US double-speak on Middle East 'Peace'.

► Arwa Ibrahim on whether the US has always been an 'honest' broker.

Until next time, stay tuned for continuous updates from our correspondents and MEE's US team.

Major clashes have begun in the Aida refugee camp between Palestinian protestors and Israeli soldiers.

"Some people are evacuating their homes after tear gas managed to get inside their homes," said Patel

"Apparently some people had started to roll burning tires at the military tower, so the jeep came out and shot tear gas into the camp, at homes,"

She added: "Due to the cold and windy weather, the tear-gas is having a huge impact on Palestinians with many choking from the gas and desperately seeking medical attention."

MEE is live in London and Washington where hundreds continue today's protests against US President Donald Trump recognising Jerusalem as Israel's capital.

You can view the protests live on our Facebook page. Here are the links below:

Here's a quick breakdown of what went down. We did the listening so you don't have to:

►US ambassador Nikki Haley described the embassy move and recognition as a "common sense move".

►Every country in the UN Security Council session except Israel condemned the move and cited fears it will exacerbate tensions in the Middle East.

►Israel held up an "ancient coin" to justify its claim to Jerusalem as the capital.

Danny Danon, Israel's UN ambassador described the US recognition of Jerusalem as its as a "milestone" for Tel Aviv.

"No UN vote can alter this historical fact. This council had the audacity or the chutzpah (to say) that Israel's presence on the Western wall has no legal validity and that it holds a flagrant violation of international law," said Danon.

"This organisation is responsible for one historical wrong after the other. That is why Trump's decision was right.

The American announcement should be a reality check to the Palestinians and to the world."

Palestine: 'Jerusalem is the red-line for Palestinians'
4 years ago

Riyad Mansour, who is Palestine's UN ambassador, began his remarks by thanking in Arabic, the Palestinians who demonstrated and "resisted" America's decision to recognise Jerusalem as Israel's capital.

In Arabic, Mansour said: "From this podium, I would like to commend our Palestinian people who defended Jerusalem today in its neighbourhoods and places of worships. I want to commend the people on the gates, in the camps, all over the world.

He added: "Our rights and resolutions. I thank those who call for the US administration to stop it's illegal and provocative decision which has no meaning except pleasing the occupying power of Israel."

"We are grateful for the strong principled expressed by states and organisations worldwide...Mr President the Israel-Palestinian conflict continues to pose a threat to international peace and security is no question.

Israel has never been recognised as a sovereign over Jerusalem. Its status remains unresolved and continues to be a final status discussion."

Vasily Nebenzya, Russia's permanent representative to the UN, said it would continue to provide "energetic" support to both Israelis and Palestinians.

He used his address to call upon a peace process to be facilitated via Egypt and called on America to explain why it made its decision and under what grounds.

Nebenzya said: "Particular attention should be given to the freedom of access to the holy places of Jerusalem."

He added: "Fair and reliable settlement based on the well-known basis of international law."