10 things we learned from Israel's Herzliya conference on security

Building an alliance with Sunni states, maintaining the occupation without a settlement, and a visit by Saudi's new crown prince... and more 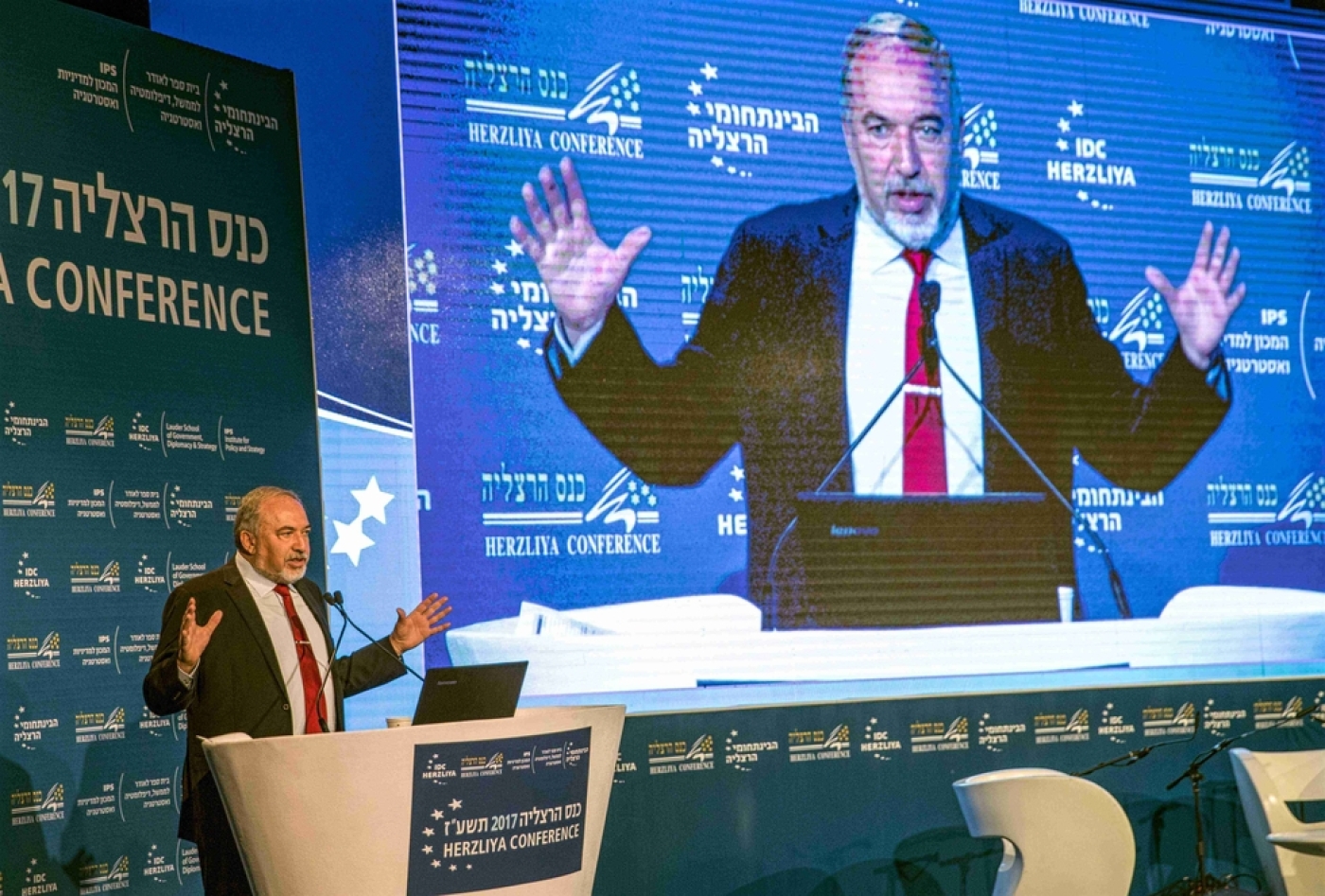 Better relations with Saudi. What Mahmoud Abbas really wants. And the threat raised by "Hezbollastan".

These were some of the subjects covered by this year's Herzliya conference, organised by the Israeli Institute for Policy and Strategy. The event has an ongoing remit of supporting the "formation of a grand strategy for Israel and the region". This year it took as its theme “Israel’s strategic balance: opportunities and risks”: here's a quick roundup of some of the key ideas covered.

Gilad Arden, public security minister of Israel, said that there was an “historic opportunity to create a new coalition between Israel, other western countries and the Arab-Sunni states based on common interests”.

The alliance was brought up repeatedly during the conference. Moshe Ya’alon, former Israeli minister of defence, claimed that “the phrase Israel-Arab conflict isn’t relevant any more” as Israel was no longer in conflict with the Arab Sunni camp.

Herzi HaLevi, chief of the IDF military intelligence directorate, said that the “mutual interests between Israel and the pragmatic Sunni state have substantially grown”.

The remarks all echoed a press conference given by US Secretary of Defence James Mattis in April, when he said that the alliance between Washington and Israel is “the cornerstone of a wider, regional, security architecture that includes cooperation with Egypt, Jordan, Saudi and our partners in the Gulf".

"We saw what a wonderful host you can be... when President Trump was there," said Katz, referring to the US presidential visit in May.

"You can also send your heir, the new one, Prince Mohammed bin Salman. He's a dynamic person. He is an initiator. And he wants to break through."

The biggest danger to Israel is the potential threat on its northern borders, according to several speakers at the conference.

Amos Gild, head of the Israeli Institute for Policy and Strategy and a former high-ranking security official, said: “As ISIS sinks, what rises in its place is an alliance presently forming in front of our eyes: Iran, Hezbollah, and Assad [Syria]. I call it ‘Hezbollastan’, a much stronger entity that is a strategic threat to Israel."

Moscow, said Gilad, had taken a “strategic decision to support this alignment". He warned against a potential future war on Israel’s northern borders led by Hezbollastan and financially backed by the Kremlin.

4. Let’s give thanks to Sisi

Amos said that he himself is not religious "but is starting to believe more and more in miracles” as Sisi could not have found a better way to help Israel, which he says is threatened by the Brotherhood.

Sisi ousted then-Egyptian president Mohamed Morsi of the Muslim Brotherhood in 2013 and has targeted the movement, which he regards as his political nemesis, ever since. Palestinian movement Hamas, which controls Gaza, is considered a daughter movement of the Brotherhood.

“If a coalition had been formed between the Brotherhood in Egypt and the Turkish government, we’d be in a totally different situation for the worse,” Gilad said.

5. We need to talk about Palestine

Several speakers stressed the need to address the Palestinian question so an Israel-Sunni Arab alliance could be publicly normalised.

Tony Blair, former prime minister of the UK, said: “It is no great state secret to say that forms of cooperation taking on security measures take place already, but the key to a true relationship… above the table and not below the table, that key remains the Palestinian question.”

6. Status quo instead of settlement

But what kind of shape would an Israeli-Palestinian solution take? Some speakers suggested it was in Israel’s interest to maintain a “status quo” of calm instead of a permanent settlement.

Ya'alon said that he hoped the arrival in the Middle East of Jared Kushner, under instructions from his father-in-law Donald Trump "would convince the American government there’s no chance for a permanent settlement in the foreseeable future."
Israel, said Ya’alon, should improve the situation on the ground but “keep Palestinians dependent on Israel in economy, infrastructure and security for many years to come."

Meanwhile Halevi said that in the past a permanent solution was considered an achievement, but now “the motive is interests, the method is ad-hoc coalitions, and the greatest aspiration we can talk about is reaching dynamic stability.”

Naftali Bennett, Israeli minister of education, added that “when something is unsolvable, you need to manage it”.

Israeli minister of finance, Moshe Kahlon, said he has been working to strengthen economic ties between Israel and the West Bank. “It’s not two economies but one, it’s the same currency (shekel), the same import and export rate… there has been good cooperation for the past two years.”

He had also touched on the Gaza electricity crisis: the Palestinian Authority has asked Israel to cut the amount it supplies to the territory, controlled by its rivals Hamas.

Israel will reduce electricity supplies to the Gaza Strip after the Palestinian Authority limited how much it pays for power to the enclave run by Hamas, Israeli officials said on Monday.

The decision by Israel's security cabinet is expected to shorten by 45 minutes the daily average of four hours of power that Gaza's two million people receive from an electricity grid dependent on Israeli supplies, the officials said.

The West Bank-based Palestinian Authority (PA) blamed Hamas's failure to reimburse it for electricity for the reduction in power supplies.

“[Palestinian PM] Rami Hamdallah asked me to decrease the amount of electricity we transfer to Gaza," said Kahlon, "because Ramallah is interested in bringing Gaza inside to a unity government.”

The dispute, Kahlon added, was “internal” and “none of our business”. Previously, Israeli Prime Minister Benjamin Netanyhu had said that Israel "doesn't wish to see an escalation" in Gaza, describing it as "an internal Palestinian dispute”.

Israeli Prime Minister Benjamin Netanyhu said that Israel "doesn't wish to see an escalation" in Gaza, describing it as "an internal Palestinian dispute”.

Israel's defence minister, Avigdor Lieberman, accused Abbas, the head of the Fatah movement, of trying to spark a fresh conflict between the state and Abbas's longtime rivals Hamas in Gaza.

"Abu Mazen didn't make a one-time cut," Lieberman told the conference, referring to the power crisis in Gaza. "His intention is actually to continue cuts and in a few months to stop paying for fuel, medicines, salaries and many other things. In my opinion the strategy is to hurt Hamas and also to drag Hamas into a conflict with Israel."

9. Who comes after Abbas?

But Gilad warned that Abbas's successor could prove dangerous. “Abu-Mazen isn’t preparing successors, he thinks he is eternal, but he won’t be,” he said, using the Palestinian president's other name. “If we don’t enter a diplomatic process, I believe we will find ourselves living in a reality of bloodshed after his resignation.”

Several speakers praised the current military and strategic coordination between Israel and the Palestinian Authority, which experts say enables Israel to efficiently maintain military rule in the West Bank.

According to a poll conducted earlier this month by the PCPSR, 65 percent of Palestinians want President Abbas to resign.

Ya’alon harshly criticised the previous US administration’s decision not to act as an “international policeman” in the Middle East and said the US “wished to disconnect” from the region.

“The vacuum created by this policy was filled up by three radical Islamist powers…: ISIS, Iran, and the Muslim Brotherhood led by Erdogan,” he said.

Obama’s administration was criticised in Israel for its negotiations with Iran, while Trump’s election was received with optimism, as many believe he will better serve the state’s interests in the region.

According to Ya’alon, there are positive signs that the Trump administration is adopting a different policy from its predecessor.

“The US isn’t standing on the sidelines anymore,” he said “and isn’t afraid to cross red lines,” a reference to Washington’s growing involvement in Syria.