Two soldiers were killed and three others wounded late Tuesday in an attack by Houthi rebels on a military post in Hamdan, a district of the Sanaa province.

In a separate attack on Tuesday, at least 34 people, including 25 Houthi militants, were killed and dozens injured in the clashes between army troops and Houthi fighters in the northern Al-Jawf province on the border with Saudi Arabia.

Violence erupted when Houthi rebels tried to regain control of a military site that had been captured by army forces a few days earlier.

The Houthi rebels first appeared in 1992, taking Yemen's northern Saada province as its main base of operations.

Scores of army officers and soldiers had been demonstrating outside Yemeni President Abd Rabbuh Mansour Hadi's residence in the province to demand overdue salaries, eyewitnesses said.

Amran has been the site of fierce clashes between the Yemeni army and the Houthi militants for several months now, leaving hundreds of victims on both sides.

Houthi fighters captured Amran earlier this month after dealing a Yemeni army battalion deployed in the province a humiliating defeat and killing its commander.

The soldiers protest followed a speech from Hadi on Sunday in which he said he would not compromise on the need for Shia Houthi rebels to exit Amran.

"What happens in Amran is illogical," Hadi said, addressing a group of military school graduates in the Yemeni capital Sanaa. 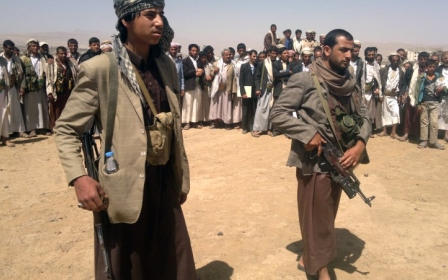