Raids so far killed 35 Palestinian civilians along with several Hamas intelligence officials, while hundreds of Gaza rockets have been fired at Israeli cities in retaliation, killing five civilians 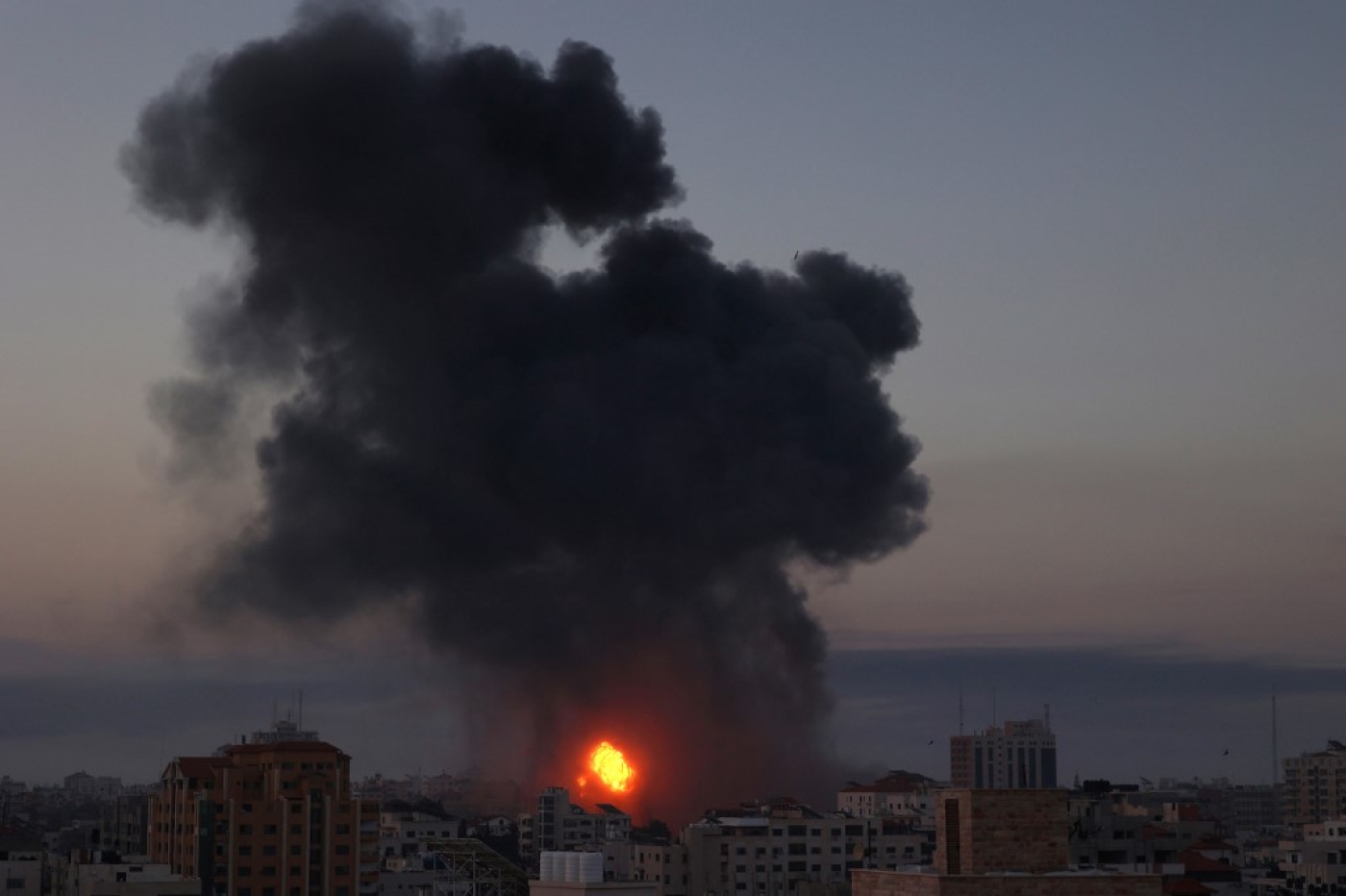 Smoke rises after an Israeli air strike in Gaza City near Barcelona Park and multiple government places, one of the biggest air strikes on the Gaza Strip, early on 12 May, 2021 (AFP)
By
MEE staff

Israeli air strikes on Gaza continued on Wednesday for the third day in a row as Hamas fired hundreds of rockets on several Israeli cities in retaliation for the killing of civilians over the past three days, amid UN warning of a "full scale war."

Meanwhile, tensions have flared up inside Israel, with the government declaring a state of emergency in the city of Lod, which has witnessed violent confrontations between Palestinian protesters and Israeli security forces. According to Gaza's health ministry, the number of Palestinians killed by Israeli air strikes on Gaza since Monday has increased to 43 civilians, including 13 children, while a total of 296 people have been wounded.

In Israel, at least five civilians have been killed by missiles fired from Gaza in retaliation for the air strikes, according to Haaretz, including one teenager and her father.

The Israeli army has announced that its air strikes on Gaza have killed senior intelligence officials in the Palestinian movement Hamas - the de facto ruler of the besieged enclave.

The statement added that the operation was in response to "hundreds" of rockets fired from Gaza towards Israel over the past 24 hours.

"In response to HUNDREDS of rockets in the last 24 hours, the IDF has struck a number of significant terror targets and terror operatives across the Gaza Strip, marking our largest strike since 2014," the statement added.

'Stop the fire immediately. We’re escalating towards a full-scale war. Leaders on all sides have to take the responsibility of de-escalation,'

The UN Special Envoy to the Middle East Peace Process Tor Wennesland  warned on Tuesday that the conflict has the potential to escalate into a “full-scale war.”

"Stop the fire immediately. We’re escalating towards a full-scale war. Leaders on all sides have to take the responsibility of de-escalation," Wennesland wrote on Twitter.

"The cost of war in Gaza is devastating and is being paid by ordinary people. UN is working with all sides to restore calm. Stop the violence now," he said.

Meanwhile, Palestinian groups in Gaza said they fired at least two hundred missiles towards the Israeli cities of Beersheba and Tel Aviv in retaliation for the air strikes.

Israel had announced on Monday the launch of a new operation - dubbed "Guardian of the Walls" - on the Gaza Strip following rockets fired by Palestinian groups on Israel in protest against the storming of al-Aqsa Mosque.

On 2 May, Israel's Supreme Court ordered that 40 residents of Sheikh Jarrah, including 10 children, be removed from their homes, which would subsequently be given to Israeli settlers. The order sparked protests in East Jerusalem, which have spread across cities in Israel and the occupied Palestinian territories.

Israeli forces have carried out violent raids on worshippers inside al-Aqsa Mosque, the third holiest site for Muslims. Security forces have stormed the mosque complex repeatedly since Monday, wounding hundreds of Palestinians.

State of emergency declared in Lod

Palestinians have come out en mass on Tuesday evening across large parts of Palestinian cities and towns in Israel and in the occupied West Bank to reject recent attacks on Palestinians in Jerusalem and Gaza.

Hundreds of Palestinian citizens of Israel took to the streets of various cities, including Nazareth, Haifa, Jaffa and Lod to denounce the attacks on Gaza and stand in solidarity with residents of the occupied East Jerusalem neighbourhood of Sheikh Jarrah, who face imminent expulsion from their homes.

Demonstrations also took place in the cities of Umm al-Fahm, al-Mashad, Tamra, Arara, amongst others. A heavy Israeli police presence was seen on the ground.

In Umm al-Fahm, Palestinian protesters set up roadblocks and set fire to tyres. Investigations have been launched after a police station was set on fire in Acre.

In Haifa, the violent dispersal of protesters resulted in injuries and a number of arrests of protesters. Israeli police later closed access to the roads in an effort to quell the growing number of people gathering.

On Monday evening, a Palestinian man, identified as Moussa Hassona, was shot dead as protests continued in the city of Lod.

On Tuesday, Israel’s public security minister declared a "special state of emergency" in the restive city after Palestinian demonstrations were galvanised by the killing of Hassouna and renewed attacks on Al-Aqsa Mosque.

“Everything necessary is done to restore law and order in Lod and throughout the country,” Amir Ohana, Israel’s public security minister, announced on Twitter.

He added that the security services have decided to deploy 16 Border Police reserve units to Lod from the occupied West Bank.

As Israeli attacks in Jerusalem and Gaza intensify, thousands of protesters have marched in major cities around the globe to show solidarity with Palestinians.

Protesters are widely calling on their governments to take action and put pressure on Israel to de-escalate its aggressive tactics in Jerusalem and the Gaza Strip.

In New Jersey on Tuesday, hundreds of people assembled in Gould Park in Patterson, draped in keffiyahs and waving Palestinian flags, in a show of solidarity with Palestinians.

Speakers chanted "Enough is Enough" and "Free Free Palestine", urging protesters to pressure their representatives to take action against the Israeli aggression over the past few days that has involved air strikes in Gaza, the crackdown on protesters in Sheikh Jarrah and attacks on worshippers in Al-Aqsa Mosque.

Patterson is home to thousands of Palestinian immigrants, and is sometimes referred to as Little Ramallah.

Addressing the crowd, Salaedin Maksut, the executive director of the New Jersey chapter of the Council of American-Islamic Relations (CAIR) told the crowd that "Israel's recent actions had proved to the world that they don't care about justice or peace".

He also connected the Black Lives Matter (BLM) protests to the Palestinian struggle for self determination.

"Our struggle is interconnected and we have to work together so that the same people oppressing Black people are oppressing Palestinians," Maksut said.

Organisers said around 500 people had attended the rally.

Footage shared on social media showed people insulting one another, and reaching over barricades installed by police in an effort to attack one another.

The protests, which have spilled onto the streets of Manhattan, came after the Biden administration voiced its ‘unwavering’ support for Israel.