The White House has officially notified US legislators of its plans to bypass Congress and move forward with the sale of billions of dollars worth of arms to Saudi Arabia and the United Arab Emirates, United States lawmakers confirmed.

In a statement on Friday, Senator Bob Menendez said that the Trump administration told members of the US Congress "that it is invoking an obscure provision of the Arms Export Control Act".

That will allow Trump  to bypass congressional oversight of the "sales of precision-guided munitions" to Saudi Arabia and the UAE, and "flout[s] Congress' role in approving arms sales," Menendez said in his statement.

"I am disappointed, but not surprised, that the Trump Administration has failed once again to prioritise our long term national security interests or stand up for human rights, and instead is granting favours to authoritarian countries like Saudi Arabia," he said.

'The Trump administration has failed once again to prioritise our long term national security interests or stand up for human rights, and instead is granting favours to authoritarian countries like Saudi Arabia'

The Trump administration's decision comes amid heightened tensions between the US and Iran.

The US president has been under pressure to hold Saudi Arabia accountable for human rights violations in Yemen, where it has waged a devastating war, with support from the UAE, since 2015.

Under US law, Congress has the ability to review and reject weapons sales to a foreign country.

But after citing recent tensions with Iran, Trump is invoking an emergency provision that would allow his administration to prevent Congress from halting the sales, which are currently on hold.

Still, Menendez, the ranking Democrat on the Senate Foreign Relations Committee, said the US president has failed to meet legal requirements for the emergency provision.

"As I repeatedly warned the Trump administration in the lead up to this ill-informed decision, I will fight any effort to further erode congressional review and oversight of arm sales," he said.

This week, the New York Times reported that US Secretary of State Mike Pompeo and several State Department officials were behind the administration's plan.

But reports of the arms sale have garnered protests from politicians on both sides of the aisle.

Both Republicans and Democrats have grown increasingly frustrated by the US's continued support for the Saudi-led war in Yemen, which has killed tens of thousands and forced millions to the brink of starvation.

But Trump has insisted that strong ties between Washington and Riyadh are critical to the US's interests in the Middle East.

"The Saudi government’s flagrant human rights abuses are clear, as is Mohammed bin Salman’s record of killing innocent people - including Jamal Khashoggi," said Menendez in his statement on Friday.

"Yet, rather than stand up against those who murdered Jamal Khashoggi and are working against US interests, the Trump administration decided to do an end run around the Congress and possibly the law." 'We are complicit in those deaths': US will continue support for Yemen war
Read More »

In March, Congress passed a historic bipartisan resolution that would have curtailed the president's war-making powers and ended US support for the Saudi-led coalition in Yemen, but Trump vetoed the measure.

"Even after Congress passed the bipartisan War Powers Resolution to end involvement in Yemen, Pompeo is still trying to sell weapons to Saudi Arabia," said Congressman Ro Khanna, who pushed the Yemen resolution in the US House of Representatives.

"Civilians continue to be bombed in Yemen and over 14M face famine," he said on Twitter. "No arms sales to Saudi Arabia."

For his part, Democratic Representative Eliot Engel, who chairs the House Committee on Foreign Affairs, called the Trump administration's decision to invoke the provision a "slap in Congress's face".

"I have deep concerns about how our Gulf partners have conducted the war in Yemen, including with US weapons, some of which have reportedly ended up in the wrong hands in Yemen," he said in a statement.

Congressman Justin Amash, an Arab-American Republican who has called for impeaching Trump, also denounced the move.

"[The president] is (again) going around Congress—this time to unilaterally approve billions in arms sales, including to the brutal Saudi regime. Congress must reclaim its powers," he wrote on Twitter. "When will the legislative branch stand up to the executive branch?" 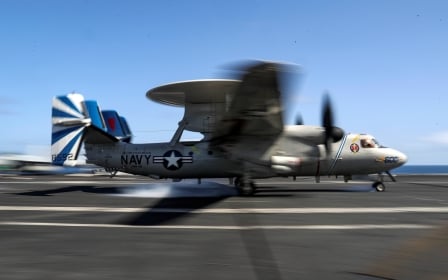