Qatar has urged the Taliban to "combat terrorism" following the group's capture of Afghanistan last month.

Speaking at a press conference on Wednesday, the Gulf state's Foreign Minister Sheikh Mohammed bin Abdulrahman al-Thani said that there needed to be an inclusive government in Afghanistan to tackle the ongoing threat from militant groups.

"It is our role to always urge [the Taliban] to have an expanded government that includes all parties and not to exclude any party."

He added that it was crucial that the Taliban allowed "safe passage" for those who wanted to leave Afghanistan.

His comments come as the Netherlands announced it would be moving its Kabul diplomatic mission to Doha, following similar moves by the US and UK. "I've asked his excellency to very kindly agree to the relocation of the Netherlands embassy from Kabul to Doha," Foreign Minister Sigrid Kaag told journalists after meeting her Qatari counterpart in Doha on Wednesday.

The Taliban seized control of Afghanistan's capital earlier this month as the United States and its allies withdrew troops after nearly two decades of conflict.

The international community has scrabbled to evacuate its people from the country, fearing reprisals by the Taliban.

“We have had to leave Afghanistan for now and the embassy will operate from Qatar for the time being,” said the UK's ambassador to Afghanistan, Laurie Bristow, upon his arrival back to London on Sunday.

“But we will continue to stand by the people of Afghanistan, working on humanitarian, diplomatic and security work and above all bringing to the UK Afghans and British nationals who still need our support, and we will be putting pressure on the Taliban to allow safe passage for those people."

The Gulf states, including Qatar, the UAE, Kuwait, and Bahrain, have been critical staging posts for flights evacuating Western citizens as well as Afghan interpreters and journalists. Diplomacy
Baghdad summit: Egypt's Sisi and the emir of Qatar meet for first time since reconciliation 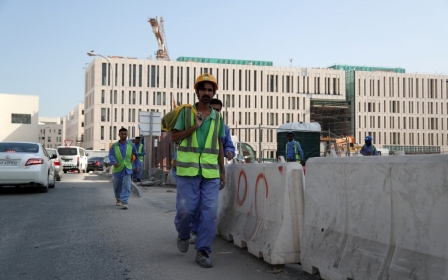