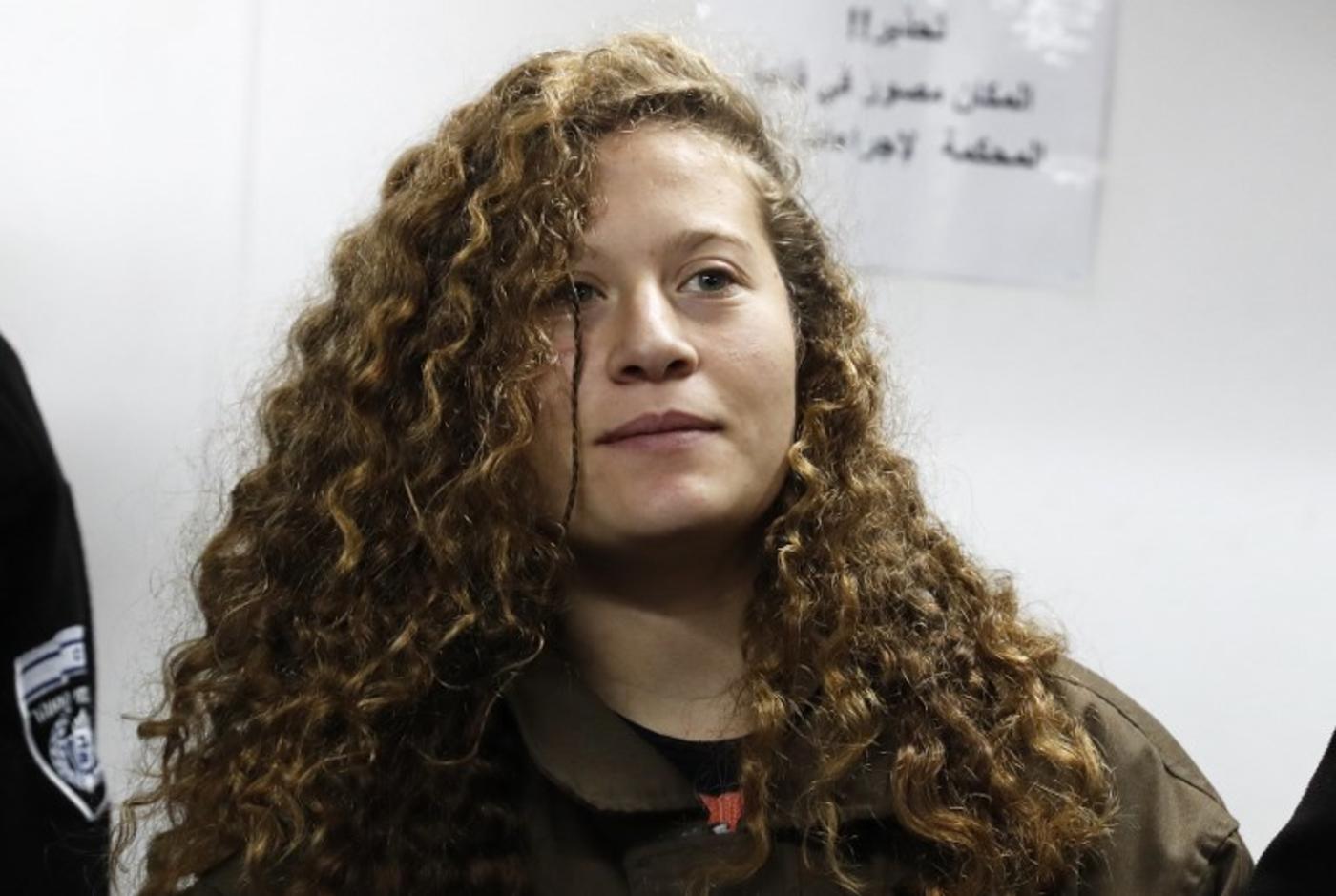 Sixteen-year-old Ahed al-Tamimi stands for a hearing in the military court at Ofer military prison in the West Bank village of Betunia, 1 January 2018 (AFP)
By
MEE and agencies

An Israeli military court extended on Tuesday the detention of a Palestinian teenager, filmed slapping and kicking two Israeli soldiers outside her home last December.

The case of Ahed al-Tamimi, who turned 17 in prison last month, gained international media attention and she has become something of a symbol to supporters of Palestine.

The judge adjourned the trial until 11 March.

The trial on Tuesday was in closed-door proceedings, despite a request from Tamimi’s lawyer for the media to be able to observe.

The judge ordered journalists ejected from the courtroom, ruling that open proceedings would not be in the interest of Tamimi, who is being tried as a minor.

A large crowd of local and international journalists had shown up to cover the trial, but only family members were allowed to remain in the courtroom, with diplomats present also asked to leave.

While militarily trials of minors in Israel are typically held behind closed doors, Tamimi's lawyer, Gaby Lasky, argued that as her previous hearings were open, the trial should remain that way.

"They understand that people outside Ofer military court are interested in Ahed's case, they understand that her rights are being infringed and her trial is something that shouldn't be happening," Lasky told journalists, after her objection to the judge's decision to close the trial was rejected.

"So the way to keep it out of everybody's eyes is to close doors and not allow people inside the court for her hearing," she added.

Prosecutors requested more time to prepare a response and a new date was set for 11 March, according to Lasky.

The closed-door proceedings were held for a couple of hours before adjourning.

Lasky said that she argued that the trial could not move forward because Israel's occupation of the West Bank and its court system there is illegal.

She added that she would make a new request to have the trial opened.

Tamimi arrived at the Ofer military court, near Jerusalem in the occupied West Bank, dressed in a prison jacket with her hands and feet shackled, smiling slightly as journalists photographed her.

Her father Bassem al-Tamimi waved to her from the audience, yelling out "stay strong, you will win."

He told journalists after the adjournment that "having people attend the court, journalists, consuls, diplomats, observers and lawyers, is very important because it keeps them safe and makes us feel that those in court are safe."

Ahed al-Tamimi has been hailed as a hero by Palestinians, who see her as bravely standing up to Israel's occupation of the West Bank.

Israelis accuse her family of using her as a pawn in staged provocations.

She has been charged with 12 counts, including assault, and could face a lengthy jail term if convicted.

The charges relate to events in the video that went viral on social media and five other incidents. They include stone-throwing, incitement and making threats.

The video was reportedly filmed on a mobile phone on 15 December in front of al-Tamimi's house. It does not show any serious harm caused to the soldiers.

Her father, Bassem, wrote on 19 December on Facebook that his daughter was reacting after Israeli soldiers shot her cousin, Mohammed al-Tamimi, on 15 December while he was protesting US President Donald Trump's decision to recognise Jerusalem as Israel's capital.

Tamimi's mother, Nariman, and cousin Nour, 20, were also due to go on trial later Tuesday.

Tamimi and her mother have been ordered to be held in custody until the end of the proceedings, while her cousin has been released on bail.