Seven hospitals and clinics in northwestern Syria have been knocked out of action this month through air strikes by the government or its ally Russia, medical personnel said on Sunday.

"In April, hospitals in the south of the province of Idlib were systematically targeted," Abdel Hamid Dabbak, who is in charge of hospitals in the rebel-controlled province, told a news conference.

He identified seven hospitals that he said were put out of service by air raids, including a gynaecological clinic.

Dabbak said work to reopen the health centres was underway, "but warplanes are still overhead and bombardments continue".

Monzer Khalil, a doctor who heads a rebel health administration, said the situation was taking its toll of civilians.

"The situation is worsening the suffering of the population... and there are especially problems for babies because we are running out of incubators," he said.

A Save the Children maternity hospital in Idlib was attacked by at least two air strikes in the last week, the NGO said in a statement.

Medics said windows were blown in and a hospital laboratory badly damaged. One incubator unit for premature babies escaped the blast after it was moved underground in the wake of a July attack.

The hospital serves 2,100 women and children and performs about 550 deliveries each month. The hospital has eight incubators for premature babies, and an outpatient clinic supporting pregnant women and providing post natal care. The closest hospital providing similar services is more than 60km away.

Khalil said three other hospitals were also bombed and put out of service in the adjacent central province of Hama.

Idlib is controlled by a rebel alliance that includes a former al-Qaeda affiliate, and is regularly targeted by both the Syrian government and Russian warplanes.

An AFP correspondent in Idlib saw massive damage at several hospitals, where equipment had been destroyed and wards were strewn with rubble.

According to the World Health Organisation, Syria is the most dangerous country for medical staff.

Hundreds of medical facilities have been destroyed in the country's six-year war, which has also claimed the lives of more than 320,000 people. 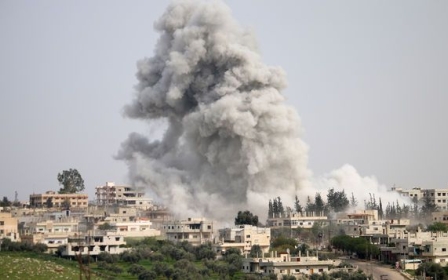