Palestinians pray outside Jerusalem's Old City in protest over new measures at the entrance of Al-Aqsa mosque, 24 July (Reuters)
By
MEE and agencies

United Nations Middle East envoy Nickolay Mladenov warned on Monday that a solution was needed by Friday to the Jerusalem mosque crisis, which he said threatens to have "potential catastrophic costs well beyond the walls of the Old City".

Israel installed metal detectors at entry points to Al-Aqsa mosque in Jerusalem after two police guards were shot dead on 14 July, triggering the bloodiest clashes between Israelis and Palestinians in years.

Incensed at what they perceive as a violation of delicate decades-old access arrangements at Islam's third-holiest site, many Palestinians have refused to go through the metal detectors, holding street prayers and protests.

"It is extremely important that a solution to the current crisis be found by Friday," Mladenov told reporters after briefing the UN Security Council behind closed doors. "The dangers on the ground will escalate if we go through another cycle of Friday prayer without a resolution."

He also warned that the crisis was not a localised event.

The 15-member Security Council met on the crisis at the request of Sweden, France and Egypt.

Sweden's Deputy UN Ambassador Carl Skau posted on Twitter after the meeting that Security Council members "agree on need for de-escalation, condemnation of violence and urgent dialogue to calm tensions in Jerusalem".

The Security Council is due to hold its quarterly Middle East briefing on Tuesday. Mladenov appealed to member states to "avoid further inflaming the situation" when they address the public meeting.

On the same day, a Palestinian stabbed three Israelis in the occupied West Bank after vowing on Facebook to take up his knife and heed "Al-Aqsa's call."

"We will enable everybody to come and pray on the Temple Mount, but at the same time we will do whatever is necessary to maintain security of this important site," Israeli UN Ambassador Danny Danon said ahead of the meeting.

Palestinian UN envoy Riyad Mansour told reporters: "We are against violence ... and we want the Security Council to have the political will to protect the Palestinian people against such violence from the Israeli occupying authority."

Meanwhile, Jason Greenblatt, a top aide to US President Donald Trump arrived in Israel Monday in a bid to ease the crisis.

Greenblatt is also heading to Jordan with US ambassador to Israel David Friedman on Monday. An Israeli embassy guard in Amman fatally shot two people on Sunday, including a man who allegedly attacked him with a screwdriver.

Jordan has said it wanted to question the guard, but Israel is insisting he had diplomatic immunity.

Speaking to Netanyahu by phone, the king stressed "the need to find an immediate solution and remove the reasons for the ongoing crisis at the Haram al-Sharif compound," a royal palace statement said.

Jordan is the official custodian of Muslim holy sites in Jerusalem.

Abdullah urged Netanyahu to cancel "new measures taken by Israel since the start of the latest crisis".

He stressed "the importance of an agreement on any measures to prevent a repeat of this escalation in the future," the statement read.

Thousands of Jordanians have demonstrated against Israel in Amman and other cities, calling for "resistance" to "Zionist attacks" and demanding the cancellation of a 1994 peace treaty. 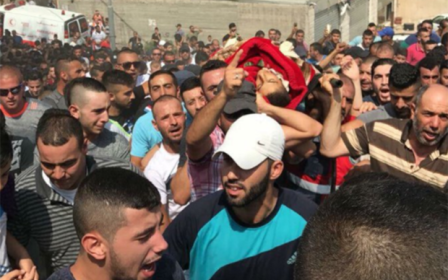