The recent purge in Saudi has fuelled all kinds of name calling on social media. One furry unusual nickname for MbS has taken off 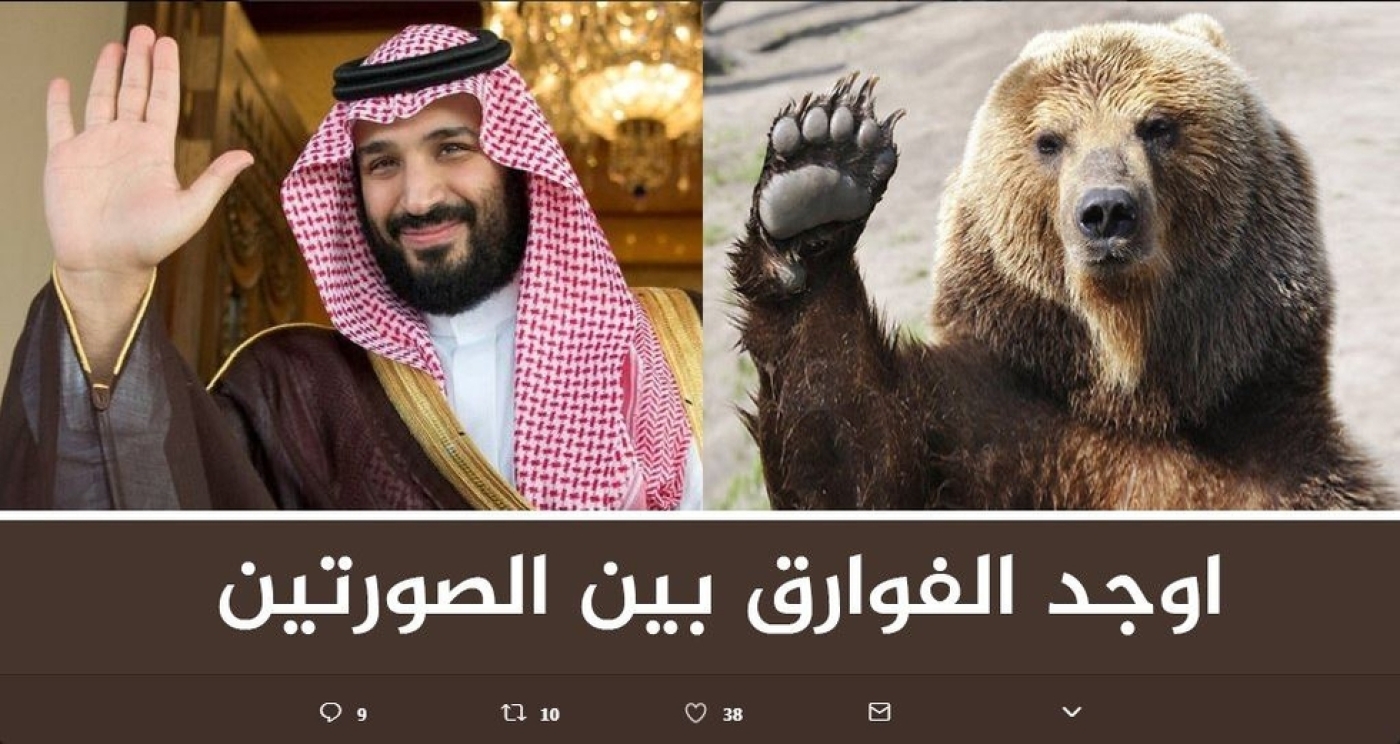 'Spot the differences between the two pictures,' one Twitter user asked this month (Twitter/@alibacha1)
By
Mustafa Abu Sneineh

Yogi Bear ran off with many a picnic basket. Paddington Bear would do anything for a marmalade sandwich. Now, according to Arab social media, there is a "stray bear" in Saudi Arabia, who likes to invade other people's countries and sack their prime ministers.

Since the Saudi purge on 4 November, the nickname al-dub al-dasher has taken off on social media among users in the Gulf, poking fun at the Saudi Crown Prince Mohammed bin Salman.

The literal translation of al-dub al-dasher is “stray bear”, a lost and wandering animal, a castaway of sorts. In English-language media, "stray bear" somehow, according to a loose translation in The Economist, became "fat crumpet", referring to the griddle cake often accompanying tea or breakfast in the UK... but not really part of the Levantine or Gulf diet.

Animal or tea cake, MbS's nickname was first coined by Saudi YouTube satirist Ghanem al-Dosari, who broadcasts his weekly Ghanem Show reportedly from somewhere in north London, after fleeing the kingdom in 2003 after criticising the government.

These days, his YouTube show attracts millions of viewers from the Gulf countries. Using playful language, he deploys humour to discuss alleged corruption among MbS and his entourage.

Saudi King Salman on the Ghanem Show is "Salamanco". The Kingdom of Saudi Arabia? Usually in Arabic, that's Al-Mamlaka Al-Arabia Al-Saudia. On the show, it's Al-Mahlakeh Al-Saudia - or Saudi Arabian hell.

MbS, whom he often features on the show as a fat baby in nappies with a milk bottle, is sometimes "Hammoud" - or a baby version of Mohammed. Sometimes he's Abu Sirwaleen which means "double underpants".

Then back in November 2016, when he first referred to al-dub al-dasher, Al-Dosari said that the royal family of Al Saud had treated the Saudi people like “a flock of sheep” over the past 90 years.

“They ruled the people in the name of Islam and Sharia while they are corrupt. They stole our money, dreams and future and then they told us it’s theirs. They kill, torture and arrest the innocents and then tell us that those are vagabonds.”

He added: "My master, al-dub al-dasher, has a big belly that could contain all the fines that he will take from the sheeped [the people] and from the ones who will be sheeped [Saudi officials]."

But it's the bear with the big belly that has really caught on.

Users of Twitter and Facebook quickly picked up the nickname and ran with it, a trend that has increased after the sweeping anti-corruption campaign which saw 11 princes and dozens of Saudi officials and businessmen arrested and held at the Ritz-Carlton in Riyadh.

Translation: There are princes whom al-dub al-dasher asked to renounce half of their fortunes in order to release them. I never saw rudeness such as this.

Translation: Prepare your asylum application! Saudi passport will not save you when Al-Dub Al-Dasher arrests you.

Some Arab media outlets have even used the nickname in their editorials, including Palestinian news site Arab48 that pictured Saudi Arabia as a kingdom that lost its way in the hands of the 32-year-old crown prince.

Middle East Eye contacted Al-Dosari to understand his inspiration behind the nickname craze he's started, but he hadn't responded in time for publication. He was probably off on a bear hunt.