Al-Qaeda’s leader on Sunday urged rival rebel fighters in Syria to unite or risk being killed, in an audio recording released online.

In the recording Ayman al-Zawahiri praised the Nusra Front, a rebel group that is affiliated to al-Qaeda, and which controls most of Syria’s northern province of Idlib.

Zawahiri also criticised the Islamic State (IS) group and the UN-backed peace process in Geneva, which he said was failing to find a solution to the conflict in Syria.

"We have to want the unity of the Mujahideen in Sham [Syria] so it will be liberated from the Russians and Western Crusaders. My brothers ... the matter of unity is a matter of life or death for you," Zawahiri said.

“It is our duty to support jihad in the Levant, with whatever power we have.

On al-Qaeda's ties to Nusra, Zawahiri said: “They ask about our ties with Nusra, we are proud of our ties with them and we pray that God give them strength and success.”

Nusra is fighting as part of an alliance of rebel groups known as Jaish al-Fatah, which is battling Syrian President Bashar al-Assad’s forces, along with his Russian and Iranian supported allies in the south of Aleppo’s countryside.

The group has tried before to unite Sunni Muslim rebel factions but failed, most notably in January when the largest rebel group Ahrar al-Sham refused to join one united front.

Zawahiri is the successor to the late Osama bin Laden, and he has the loyalty of al-Qaeda affiliate across the Middle East, North Africa, and South Asia.

A day later, the son of Al-Qaeda's late founder Osama bin Laden also backed Zawahiri's call claiming that uniting in the fight in Syria will pave the way to "liberating Palestine".

"The Islamic umma (nation) should focus on jihad in al-Sham (Syria) ... and unite the ranks of mujahedeen there," said 23-year-old Hamza in an audio message posted online.

"There is no longer an excuse for those who insist on division and disputes now that the whole world has mobilised against Muslims," he said.

"The road to liberating Palestine is today much shorter compared to before the blessed Syrian revolution," he said.

US intelligence officials have said that Hamza was the favourite son of the 9/11 mastermind who had been grooming him to take over as Al-Qaeda's leader.

The audio recording of his voice has not been independently verified but it does have the hallmarks of previous tapes of his voice. His whereabouts are not known but many leading al-Qaeda figures, including Zawahiri, are believed to be in hiding somewhere along the border between Afghanistan and Pakistan.

The al-Qaeda leader said in the recording that IS are “extremists and renegades” whose members would eventually abandon their beliefs.

IS has challenged al-Qaeda’s dominance since its emergence as a potent fighting force in Syria and Iraq, and its establishment of a state in that area has undermined Zawahiri’s role as claimed leader of global Islamic jihad. 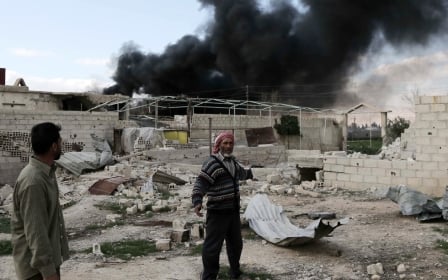