While hundreds flee the countryside near Syria's divided city, war planes fill the Aleppan skyline and cast uncertainty over its future 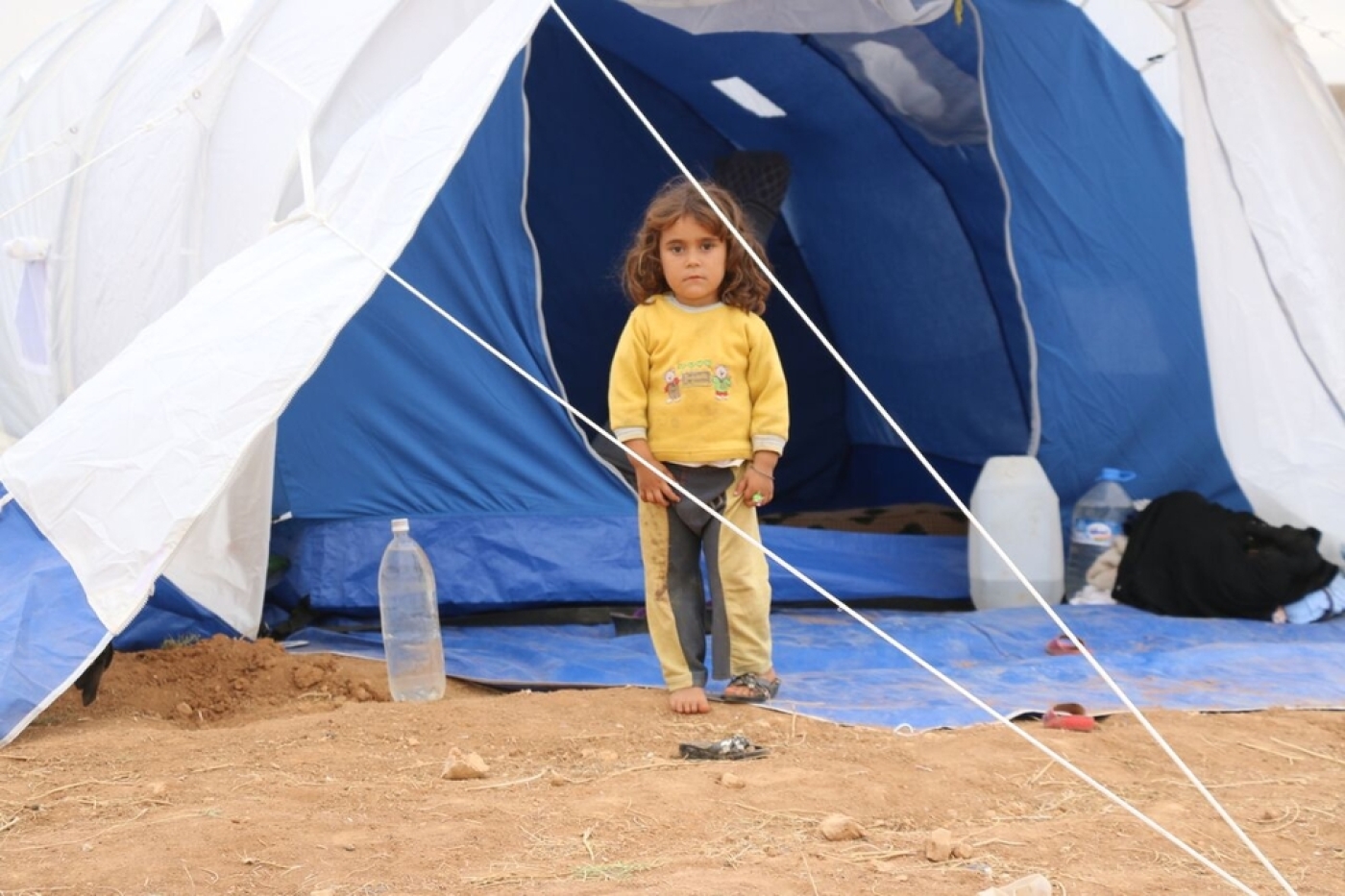 A girl recently displaced in the Zummar refugee camp in the southern countryside of Aleppo, Syria on 22 October 2015 (MEE/Thaer Mohammed)
By
Linah Alsaafin

Thaer Mohammed admits he's biased, but if you ask him, Aleppans are the best at keeping their spirits up in the face of Syria’s four-and-half-year-old conflict.

“People are getting by,” Mohammed told Middle East Eye from Aleppo by phone.

“In a twisted way, families have grown accustomed to the situation and the shelling. After a barrel bomb explosion for example, people would have cleaned the area an hour later, vendor sellers would be by their carts again, and life goes on.”

The 21-year-old, a photographer with the Aleppo Media Centre, has seen his own share of dark days.

Syria’s largest city has been divided between government and rebel control in the west and east respectively since 2012. Thaer used to live with his family in the western part of the city, before government forces arrested him a couple of years ago for being a media activist.

He spent eight months in a notorious detention facility in Damascus called Falastin [Palestine], where torture is rampant. He only managed to leave through a series of bribes and the efforts of intermediaries, but going back to west Aleppo was out of the question.

Thaer now lives under rebel control in the east and has not had contact with his family for months. He is still wanted by the government who he assumes are surveilling his family closely and making contact could endanger them. As the government continues to bomb east Aleppo, rebel groups fire missiles and mortar shells at the other side of the city.

Resurgence of the army

The war of the divided city was thrown into greater chaos last week when Syrian government forces, aided by Russian air forces, launched a military operation on Aleppo province. The operation - focusing on the city's southwestern districts - is a bid to regain control over the Aleppo-Damascus International Highway that leads to the government strongholds of Damascus and Latakia.

The strategic highway, which is located along the Idlib governorate border with Aleppo, serves as the gateway for the rebel supply route from Idlib.

Four other operations were also launched at Hama, Homs, Idlib and Latakia provinces, all carried out under the protection of Russian air forces, which analysts say have revitalised a much demoralised Syrian army.

Reports have referred to the capture of several towns under rebel control by Syrian government forces, backed by Iranian fighters and the Lebanese Hezbollah militia on the ground.

Tens of thousands of residents in southwest Aleppo have been displaced, say UN and relief organisations who put the number of Aleppans fleeing as high as 70,000 so far. Hospitals have also been targeted in direct hits, resulting in their indefinite closure.

According to the Syrian-American Medical Society, nine Russian air strikes have targeted hospitals throughout Syria since it began its military intervention, bringing the total attacks on medical facilities to 321 since the start of the conflict.

Thaer has been to the southern countryside and witnessed people setting up makeshift tents away from the fighting or crossing the border into Turkey.

“Aleppo the city is always under threat, and every day people flee,” he said, “but in the last week and probably for the upcoming days it has been the people in the rif (countryside) who have been fleeing due to fierce shelling.”

According to Thaer, Syrian army helicopters have disseminated flyers from the sky over Aleppo city, threatening to heavily bomb the city and warning residents to head to the government-controlled areas if they want to stay alive.

“Most people can’t cross over to the other side because of financial difficulties or being wanted by the government,” Thaer said. “They also want to stay put and don’t want to go to Turkey.”

Ali Ibrahim, a longtime Aleppo resident, journalist and documentary maker still based in the city, believes that despite the displacement of many people in Aleppo’s southern countryside, President Bashar al-Assad’s tactics will not be successful.

“The hundreds of air strikes that the Russian forces dropped on rebel centres in the countrysides of Idlib and Aleppo has been counterproductive, as that has succeeded in uniting different rebel factions, leading to more organised coordination between them,” he told MEE.

Different battalions have merged with more established coalitions, such as the case with the Abu Ammara Brigades joining Ahrar al-Sham, an umbrella organisation made up of Islamist groups like al-Qaeda’s Syrian affiliate al-Nusra Front. Supporters of Abu Ammara say that the brigade is renowned for its effective attacks against Syrian army forces.

While government forces have succeeded in capturing villages in the provinces of Hama and Homs, Ibrahim said that the army’s efforts to advance into the Khan Tuman and Al Waddihi areas, south of Aleppo and enroute to the prized highway, have been in vain.

While Russian forces have not yet targeted the city of Aleppo, the Syrian army has not ceased its aerial attacks on the rebel-controlled side. Ibrahim’s wife and seven-year-old daughter were killed two months ago in a barrel bombing that fell on their house.

“Families living in rebel-controlled areas suffer from constant barrel bombs dropped by regime forces,” he said. “Now the [countryside] in the south is subjected to air bombings by Russia, which have targeted hospitals, homes and schools.”

A staunch ally of Assad, Russia’s military intervention began on 30 September to shore up the Syrian government forces by allegedly attacking the Islamic State (IS) group.

However, evidence from Russia’s defence ministry statements have shown that out of the 65 named locations that the Russian Air Force has targeted, less than a quarter hit areas under IS control.

The US and its allies have accused Russia of bombing rebel opposition groups, many of which are backed by the US, Turkey and several Gulf states.

“If you look at the map, you can easily understand that they are not fighting the Islamic State, but other opposition groups,” Golts said.

Russia has since fired more than 500 sorties in three weeks, with Reuters putting the figure to as high as over 780.

According to the Syrian Observatory for Human Rights, over 370 Syrians – a third of them civilians – have been killed in Russian air strikes so far.

For those in the Aleppan southern countryside, the displacement continues.

“Hundreds of families are on the move," Ibrahim said, “[running from] Russian and regime air strikes, in addition to the fighting on the ground between the Syrian army and rebel groups.”