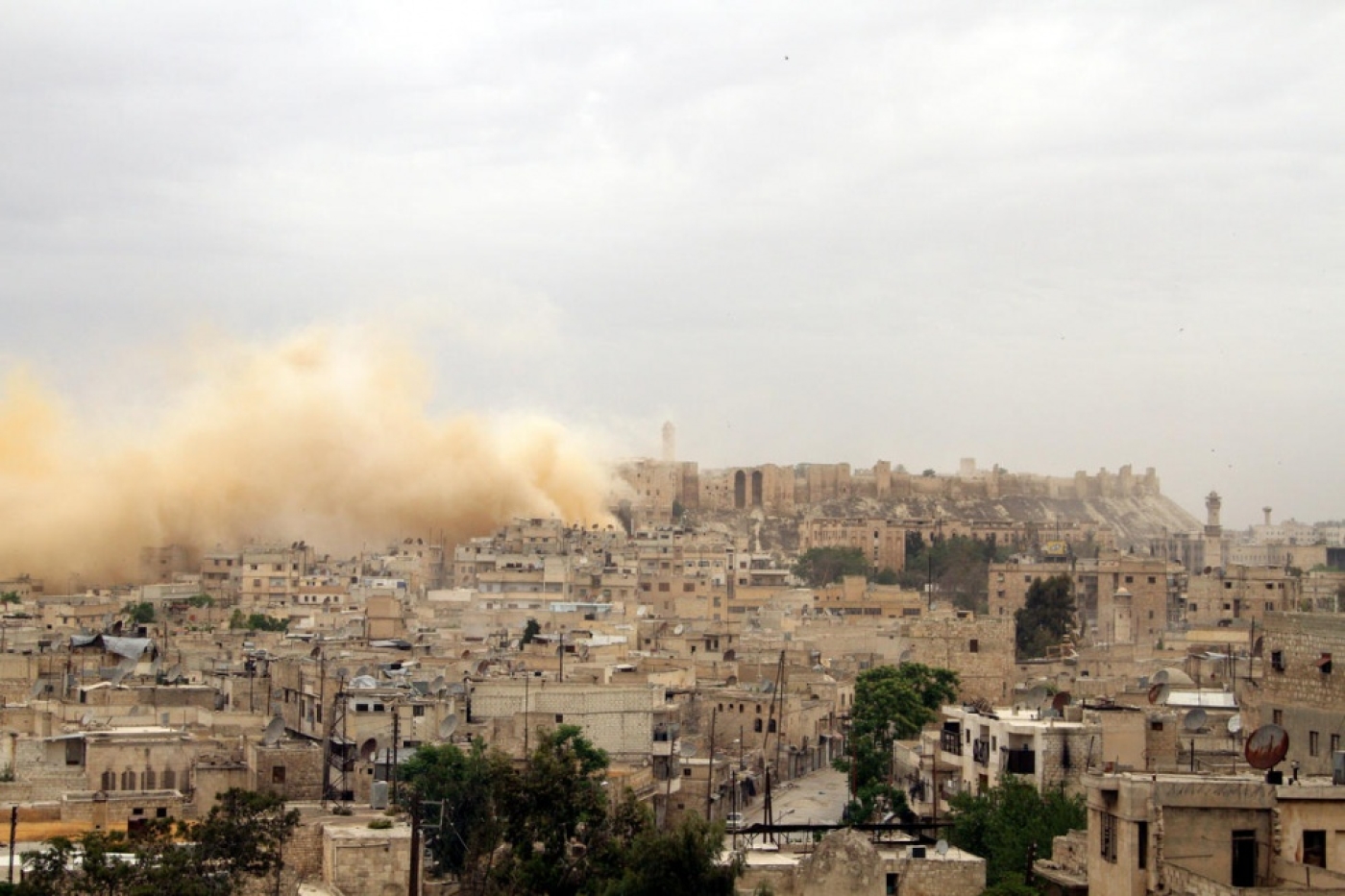 Members of the Islamic Front blew up an Aleppo hotel, headquarters for the Syrian army, earlier this month (Anadolu Agency)
By
Emma Beals

Just days before government forces entered the prison on Thursday, the MEE travelled to Aleppo to meet with Abu Bilal at the frontline of his bridgade's battle against the Syrian regime over Aleppo. The colonel explains that the government has been trying to advance for the hills around Aleppo Central Prison, under siege for more than a year, because this will enable them to push into Aleppo and to try and surround it.

“The regime are trying to cut the main routes, and this is will make it difficult to supply civilians and our forces,” he says.

Opposition forces have denied reports that government troops fully retook the jail on Thursday, but just days previously, Bilal admitted that full control of the strategically important facility would give forces loyal to Syrian President Bashar al-Assad a clear run into the rebel-held areas of the city. “The regime is trying to cut the main routes, and this will make it difficult to supply civilians and our forces,” he said.

Located in the rebel-held north of the country, Aleppo has been locked in a war of attrition for nearly two years. In recent weeks, a major government offensive has been launched on the city’s north-east corner, leaving rebel-held east Aleppo accessible via only one access route, a precarious trail which snakes down through two regime positions at the Aleppo Central Prison and Sheikh Najar and the Industrial City.

Bilal's men typically huddle just a few hundred metres from Aleppo prison, behind the bridge’s base in the middle of one of the city's main front lines of Sheikh Najar and the prison.

They are positioned in what was once a residential neighbourhood, long since abandoned. Soft furnishings left behind by a former owner jar with the men's dushkas and sniper rifles.

Tawhid’s forces have suffered heavy losses in recent weeks after the Syrian government bombed an exposed front line in Sheikh Najar, an industrial area in the north-east of Aleppo city, most probably in retaliation for recent tunnel operations.

The rebel's latest tactic involves digging passages underground and detonating large bombs under regime bases and checkpoints, a method that has been used to spectacular effect in the Carlton Citadel hotel bombing on 8 May.

Despite the government offensives, increasingly coordinated and organised rebels including the Islamic Front are mounting a serious battle to retain control of their half of the city. In the outskirts of Aleppo's Hanano neighbourhood, fighters take shift breaks from the front lines.

After gathering there for briefings, the men – more than a dozen at a time - clasp their weapons and pile into the waiting van ready to begin another day in the ongoing battle for control of what remains of Syria's largest city.

But the main problem for the rebels is the same as it has been throughout the war – they lack resources and are often outgunned by their government foes.

“Everybody knows the rebels don’t have high quality weapons, we have normal weapons.  We don't have enough ammunition,” says Abu Bilal.

He contrasts this with the weapons available to the government: “They used the firepower from air strikes and shoot from far away. The airplanes normally come very high and bomb, that's their strategy if they take this area – also we have a strategy, push for many places to stop them surrounding.”

Abu Assad, the military commander for the Islamic Front who's responsible for the recent tunnel attacks, agrees.

“The regime put all their power in this frontline because their main target is Sheikh Najar,” he told MEE. “The reason for their advance is unequal power. We don't have equality of weapons against the regime and their aircraft and the tanks.”

The Central Aleppo prison has been under siege since April 2013, with rebel forces desperately trying to hold their ground. If the siege was indeed broken on Thursday, it will come as a major blow to the opposition and will allow Assad to beef up his supply routes in preparation for a larger assault.

“We have a strategy - push in many places to stop them surrounding Aleppo. We are on standby for these battles, I think it will be a long battle," says Abu Bilal. With Homs, the 'home of the revolution' gone, the rebels can't afford to lose Aleppo, too. They're preparing for a long fight."

For months, the Syrian government has been pounding the city with barrel bombs, killing hundreds and leaving large areas of the city deserted. Of the estimated 3 million residents in the area, just 500,000 remain, going about their daily lives as best they can in small pockets of the city.

The front lines that divide the city between the government areas in the west and the rebel-held east are in constant friction. Both sides are holding their ground, but little more.

In Sheikh Najar, the stakes are higher. Government forces have created a pincer-like grip on either side of the only road that connects the northern countryside to the city.

Aid to the city centre isn't getting through. Despite the United Nations resolution in February mandating cross-border aid, the warring parties are yet to make this a reality. The Homs truce negotiation saw the rebels allowing aid into Nubul and Zahra, two regime-held Shi'ite villages just north of Aleppo. However, nothing similar has as yet reached the rebel-held east of the city. Most international NGOs that work secretively inside the north of Syria are not coming in to town because the road is too dangerous.

“They [the Syrian Government] use big fire power and make people leave the city, shelling by barrel bomb where the areas for civilians are," says Abu Bilal.

Struggling to survive in a divided city

Despite the battle for control of the city, there's not much left in the rebel-held Aleppo to protect. As a result of nearly daily barrel bombing, the residential suburbs of eastern Aleppo now lie deserted. Hanano, once a vibrant residential neighbourhood of 215,000, now houses just 500 people.

Muhammed, 22, sits outside one of the few coffee shops that remain open here. “Here in Hanano, you can't find anything, we go to another neighbourhood to bring food. There's nobody left in the neighbourhood, just a few young guys,” he says, gesturing to the half dozen friends who sit beside him.

Evidence of the custom-made barrel bombs remain evident for all to see - contorted barrel shells, oozing explosive material and shrapnel litter the neighbourhood. The bombs are inaccurate and are designed to create wide destruction and numerous injuries as their spray pieces of iron bar and pipe on impact.

Between five and 20 bombs have fallen each day on the neighbourhood, according to an organisation that records the incidents and did not want to be named for fear that their work would be stopped.

In small pockets of the old city, near the front lines and in close proximity to government forces where the barrel bombs don't fall, pockets of life remain. For those with money there is food to buy, and a strange kind of normalcy - restaurants serve fruit juice and falafel, men sit and talk, against the backdrop of artillery and the crackle of machine-gun fire.

If the supply road is cut, Aleppo, like Homs, could see the rebel-held areas fall under the “siege and starve” campaign of the Syrian government, used in Ghouta in Damascus and in Homs.

When asked why he stays, Muhammed replies: “Where would I go?”

- Emma Beals is a freelance journalist based in Gaziantep, Turkey. She has been covering the conflict in Syria since 2012.