Businessman Mohamed Djemai, the new head of the National Liberation Front, has pledged to root out corruption Algeria's ruling National Liberation Front (FLN) has elected a new secretary general, less than a month after widespread protests forced out President Abdelaziz Bouteflika, who headed the party for decades.

Mohamed Djemai, 50, was named new chief of the FLN on Tuesday, the state-run Algeria Press Service reported, after a vote by the party's central committee in Algiers.

Djemai secured 223 votes - more than half of the 418 ballots cast - easily edging out his closest opponent, Djamel Benhamouda, who got 126 votes, the news agency said.

His appointment comes only weeks after Bouteflika, who served as Algeria's president for 20 years, was forced from power following mass demonstrations against his planned bid for a fifth term in office. Algeria anti-corruption drive topples Bouteflika insiders, but where will it end?
Read More »

A businessman from Tebessa, a town in northwestern Algeria near the country's border with Tunisia, Djemai has held various political positions for years - including during Bouteflika's long tenure as president.

He was elected to Algeria's lower house of parliament, the Popular National Assembly (APN), several times since 2002, the Algeria Press Service said.

In an interview with Algerian media outlet APS-Algerie earlier this week, Djemai pledged that if elected he would bring all the members of the FLN together through "constructive dialogue".

"I hope to give the party credibility again in the eyes of the [Algerian] people. Because due to some negative actions taken by [some] FLN officials, the people have a negative view of the party," he said.

He also said he aimed to root corruption out of the party, while rejecting allegations that he himself was corrupt. "There are people who seek to hurt my credibility ... by making false accusations against me," he said.

In the same interview, Djemai said a group of advisers and ministers were operating outside the bounds of the country's constitution, "making decisions that they then attributed to the presidency".

He named Said Bouteflika, the ex-president's brother, as being among this group.

Djemai's comments come amid an ongoing drive to root out corruption across Algeria, as state officials attempt to reassure and rebuild trust with the public during the country's political transition.

On Monday, the former head of the Algerian police appeared in court as part of an investigation into corruption cases.

Several other figures with close ties to Bouteflika and his old government have also been rounded up, with powerful businessmen - known as "the oligarchs" - now facing questions over alleged wrongdoing.

But the arrests and promises to finally put a stop to corruption, which has long plagued Algeria and exacerbated socioeconomic tensions, haven't appeased the protesters, who are demanding that the entire political system be overhauled.

Since the demonstrations began in February, Algerian protesters, political opposition figures and other critics have accused Bouteflika's camp of seeking to use the transition process to instal one of the president's lackeys in his stead.

The president's resignation has prompted questions about who will take over once he's stepped aside, with critics pointing out that the longstanding leader was only the figurehead of an Algerian "deep state".

This week, the head of the Algerian army said planned presidential elections, now set for 4 July, are the "ideal solution" to ending the political crisis, AFP reported.

Ahmed Gaid Salah, who previously lobbied to invoke constitutional amendments that would have forced Bouteflika out of office against his will, also rejected protesters' demand for the military to be excluded from the political transition.

The protesters are calling for the entire ruling "system" to be dismantled.

They have said top government officials need to go, including interim head of state Abdelkader Bensalah and Prime Minister Boureddine Bedoui, both of whom had close ties to Bouteflika and his old government.

On Friday, tens of thousands of Algerians marched across the country to reiterate their demand for a complete political overhaul and for the ouster of corrupt officials. 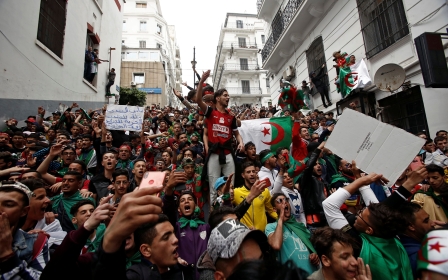