Conservative MP Bob Blackman invited Tapan Ghosh, a Hindu nationalist who has praised the ethnic cleansing of Rohingya in Burma 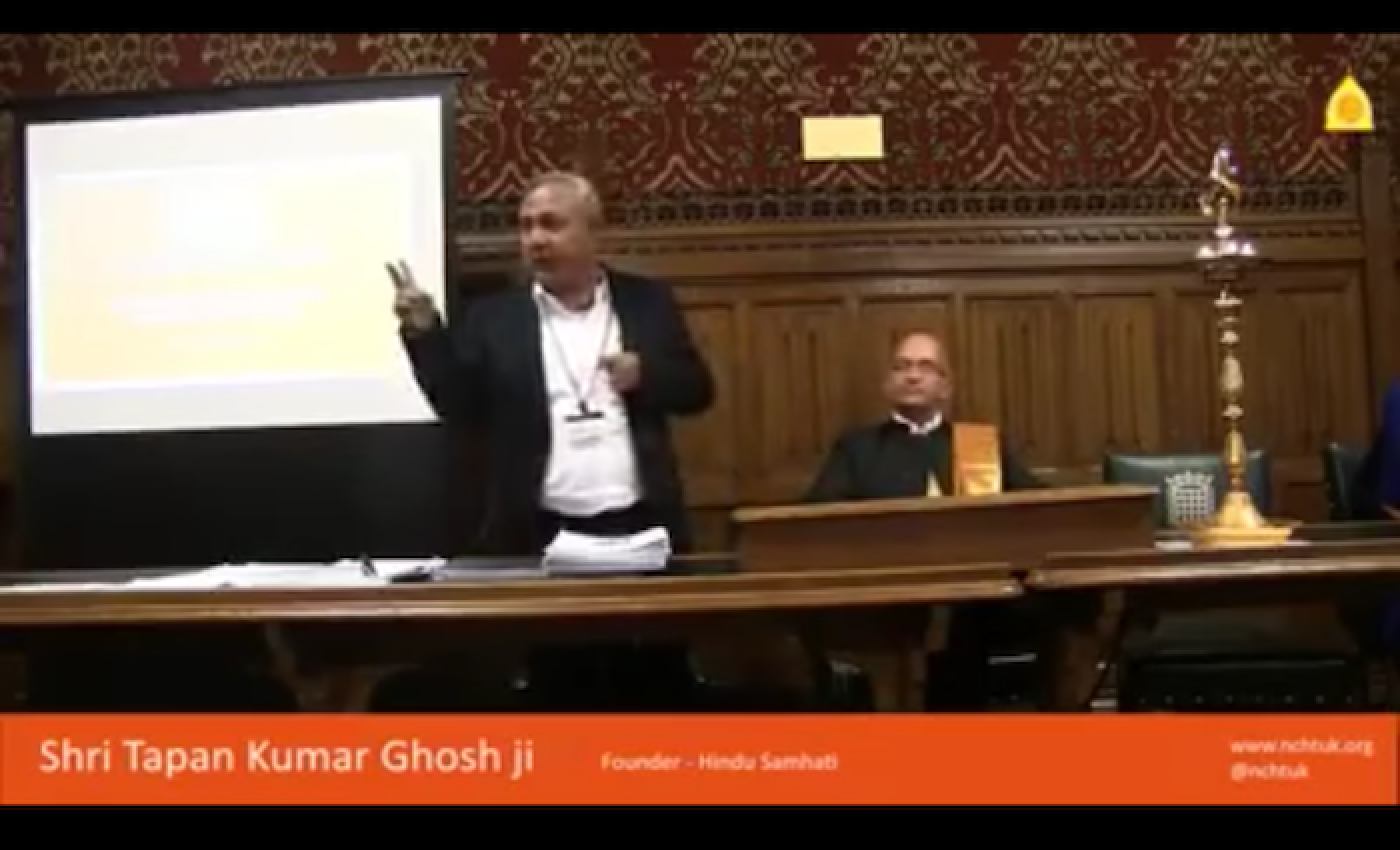 Senior members of the British government shared a platform with a Hindu nationalist who has called for the UN to control the birth rate of Muslims, praised the slaughter of the Rohingya in Burma and supported claims that one million UK children have been raped by Muslims.

Home Secretary Amber Rudd and Cabinet Minister Damian Green were among the senior Conservative politicians who joined Tapan Ghosh at the Houses of Parliament event celebrating Diwali earlier this month.

Ghosh has praised the recent attacks against Rohingya Muslims in Burma, also known as Myanmar, which has been described by the UN as a "textbook example of ethnic cleansing".

On Twitter he said: "Backwardness is the most powerful 'weapon' of Islam. Rohingyas are glaring example."

He also tweeted: "Shame on Rohingya men. Shame on Islam. Seeing this reproduction rate, how can we blame the Myanmar Buddhists for driving them out?"

Ghosh, the founder of the far-right Indian political party Hindu Samhati, left the right-wing RSS movement in 2008, accusing it of "lacking aggression".

During his trip to London earlier this month, he was pictured relaxing on a sofar with UK white nationalist figure Tommy Robinson at a meeting "on demography and global resistance against Islamic violence and aggression" in London on Monday.

Ghosh used his speech in parliament to offer thanks for Diwali and call for refugees to be treated kindly, but his long history of anti-Muslim comments will likely prove embarrassing for the home secretary and Green, who is seen as the UK's "deputy prime minister". The Conservative Party has long sought the British Hindu vote.

Trupti Patel, the president of Hindu Forum Britain, which organised the event, told MEE that her organisation had "checked everything about" Ghosh's background and defended his views on Muslim attacks on Hindus.

"What he does is help Hindus in Bangladesh and West Bengal who have been treated really badly, and have had their villages burned. This person is doing good voluntary work," she said.

She also said Ghosh had helped Hindu refugees who had been attacked by Rohingya in Burma. "Why are we going on about Rohingya Muslims all the time... Islamophobia is so annoying that our [Hindu] boys and girls are being treated so badly."

She also supported Ghosh's claims of so-called Love Jihad, a claim often put forward by far-right Hindu groups that allege a conspiracy by Muslim groups to lure Hindu women into marriages with Muslim men and to convert them to Islam. Patel said she aware of up to 50 cases where it had occurred in the UK.

Transport Minister Theresa Villiers, Minister for International Development Priti Patel and Communities Secretary Sajid Javid also attended the event on 18 October, which was held in the Terrace Pavilion at the House of Commons.

In a statement to MEE, the Home Office said that Rudd "fundamentally disagrees with Mr Ghosh’s views on Islam."

“The Home Secretary accepted an invitation from the Hindu Forum of Britain to attend an event in Parliament last week to celebrate Diwali," they added.

"She did not speak to Mr Ghosh and was not present when he spoke.”

A spokesman for the Muslim Council of Britain, MBC, said it was "astounding" that Ghosh was "welcomed with open arms" to parliament given that he "trades in propagating hatred against Muslims in India.

It added: "Ghosh is a founder of a far-right party in that country and in this year we have heard of shocking murders against Muslims, very often linked to the kind of anti-Muslim rhetoric emanating from people like Ghosh.

"If we are to tackle extremism as the government has stated it wants to, then we should not see it emanating on its own doorstep and apparently condoned by its own MPs."

Labour MP Wes Streeting told MEE: "We don't always know the background of everyone we meet or appear alongside as MPs, but I hope colleagues will clear this up by roundly condemning his remarks and ensuring that he isn't welcomed to Parliament again."

Bob Blackman MP, a Conservative member of the communities and local government committee, later hosted Ghosh inside the Commons for an event called "Tolerating the Intolerant" on behalf of the National Council of Hindu Temples (UK).

Ghosh told the event that he had created a "Hindu Defence Force" to protect Hindu communities against Muslim violence. "Your girls and daughters are threatened by grooming but in our country our land is threatened and our existence is threatened," he said.

A video of Ghosh, who lives in the Hindu-majority West Bengal, appeared to show him defending alleged "human rights violations" against Muslims by his supporters by saying: "Our existence is threatened and - the human rights violation - the real thing is you are secure and we are not secure.

Blackman told MEE: "One of the most worrying trends in recent years has been grooming and forced conversions of Hindu minorities in the UK and countries like Bangladesh and Pakistan. In our commitment as a nation to fight extremism and radicalisation it is important to hear the voices of suppressed minorities."

He added that the choice of speakers at the event was made by the NCHT.

Satish K Sharma, general secretary of the NCHT, told MEE: "Ghosh has a great deal of support from the Bengali Muslim community in India who too find the targeting of vulnerable girls abhorrent and completely un-Islamic."

"In addition we are working directly with British imams who have come forward and are keen to see the rights of vulnerable women of all religions protected."

He went on to call on the MCB to work with Hindu and Sikh leaders, and compared Ghosh's remarks to those made by Labour MP Sarah Champion, who he said "bravely spoke out against the disproportionate number of Pakistani Muslim heritage males being convicted in sexual grooming gang cases where the girls were of disproportionately high non-Muslim origin".

He added: "The truth is as in Mr Ghosh's case, that this trend is nothing but an orchestrated mechanism to shut down those who presume to speak inconvenient truths."

Labour MP Streeting added: "People should be in no doubt about how painful this invitation [to parliament] will be to Muslims who are sadly on the receiving end of every day abuse as a result of the remarks expressed by the likes of Tapan Ghosh. We need to send a message from across the political divide that we will never be bystanders to Islamophobia in Parliament or in our communities." Islamophobia
Dear Amber Rudd: Here are 10 ways you can give Muslims the full protection they deserve
Sufyan Ismail