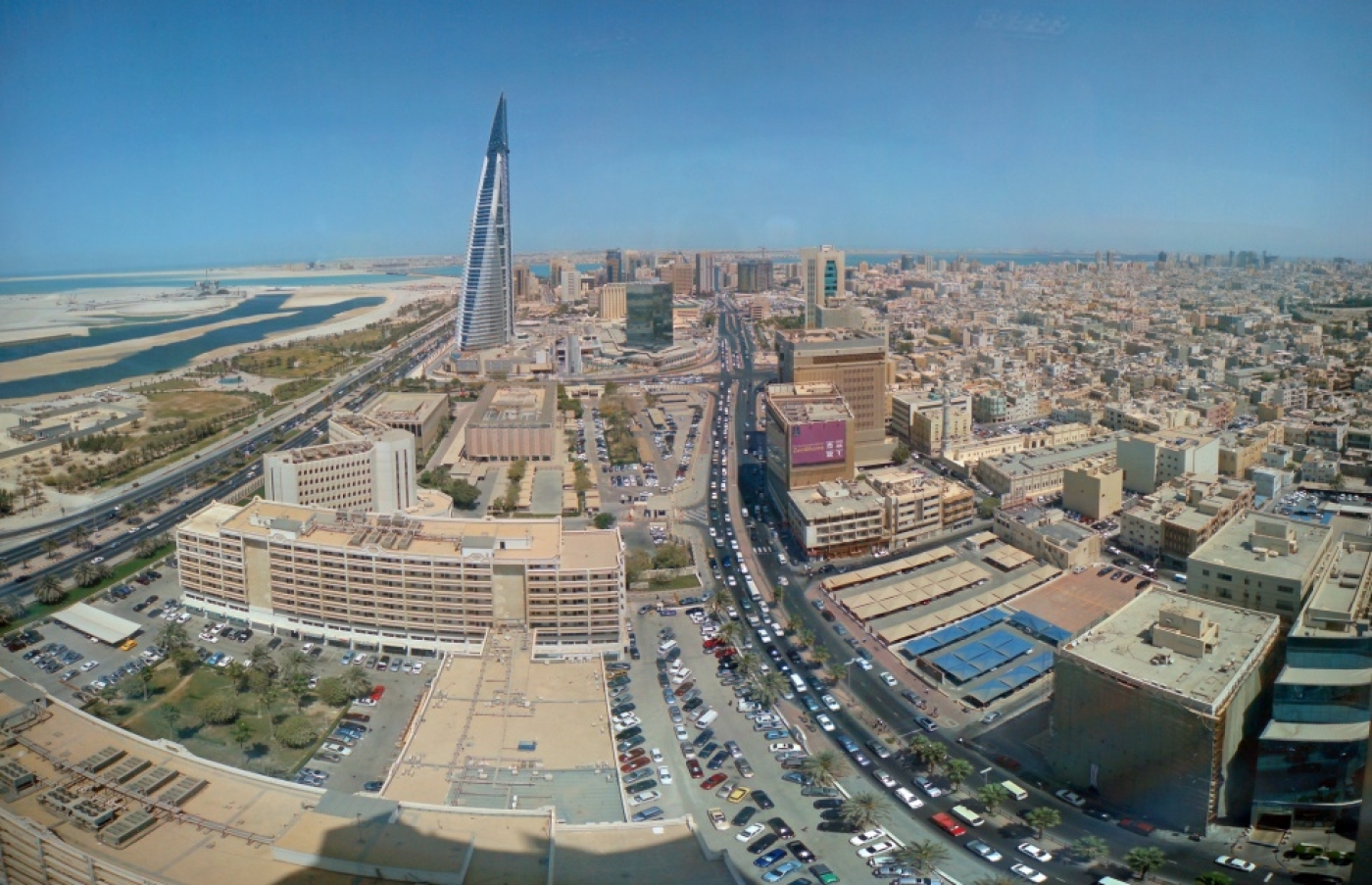 Bahrain faces a set of interconnected economic challenges, from the question of how to ensure future growth beyond the limited oil sector  to complex political-economy questions about who the country’s growth and wealth benefits.

It was the first Gulf state to discover oil and to start refining it, and was an early mover when it came to building on its energy resources. Bahrain built the first aluminium smelter in the Gulf, which now provides the country’s biggest non-oil goods exports.

It was also the first Gulf state to develop a financial centre, partly thanks to Lebanese bankers fleeing their country’s civil war. Uniquely in the Gulf, Bahrain’s single biggest economic sector is financial services, not oil and gas.

Like Oman, Bahrain started diversifying its economy beyond oil well in advance of the other Gulf countries, since its oil reserves were limited. It produces only around 48,000 barrels per day from its sole onshore field; most of its oil revenue comes from a Bahraini share of an offshore field controlled by Saudi Arabia.

It also has a local workforce that is better trained and more willing to work in the private sector than what we see in most of the other neighbouring Gulf states, in part because people are not so rich.

But unlike its richer neighbours, Bahrain has limited capital to develop and market these industries, which require foreign investment to develop further. It also needs to start importing natural gas.

Despite moves towards economic co-operation, the Gulf Cooperation Council countries (Saudi Arabia, Kuwait, the UAE, Qatar, Bahrain and Oman) have failed to agree on a system for regional gas trade, mainly because they cannot agree on prices. This means that Qatar is exporting gas all over the world, while Bahrain has variously looked to Russia, Brazil and even (a few years ago) Iran for gas.

The economy has had some benefits from the fact that the region’s other monarchies, especially Saudi Arabia and the UAE, have an interest in Bahrain’s royal family remaining stable.

Lenders have long seen Saudi Arabia as a de facto underwriter of the Bahraini economy, and Bahrain’s pitch for foreign investment relies heavily on its access to the Saudi market, largely duty-free owing to the GCC customs union. The Saudi economy is the largest in the Middle East, and more than 20 times the size of Bahrain’s (Saudi GDP was $745bn in 2013, when Bahrain’s was $32.8bn).

This economic asymmetry, and dependence on its large neighbour, creates some political constraints; Bahraini officials will quietly say that too much political reform could jeopardise Saudi economic support, though this is sometimes used as a convenient excuse.

Bahrain’s economic dependence on Saudi Arabia has only increased since 2011, symbolised by the announcement in August that a second causeway would be built to link the island with Saudi Arabia. In response to the 2011 uprisings, the four richer Gulf states have pledged $10bn apiece to Bahrain and Oman over 10 years. Meanwhile, the damage to the country’s reputation since the 2011 uprising has weakened its ability to compete with other Gulf countries for investment and expatriate talent.

The distribution of the country’s resources is another key issue of contention underlying the political unrest.

As in the other Gulf states, the state's distribution of oil income helps to underpin the monarchical system. There are subsidies, services and benefits that go to all citizens. But public sector employment opportunities and government contracts are often linked with political loyalty, while there are controversies over access to state housing and infrastructure complaints.

Perceptions of economic exclusion are particularly pronounced among the Shia population, who are kept out of most security jobs (and thus have no share in the massive salary bill that forms part of the defense budget).

Political unrest is concentrated in the poorer Shiite "villages" that have become suburbs of the capital; official attempts to blame Iranian conspiracies for unrest are a distraction from the very tangible local causes of disaffection. However, there are also wealthy Shiite families who are politically quiescent or actively supportive of the government.

As elsewhere in the Gulf, economic elites often opt out of politics in case controversy threatens business. One major Shiite businessman, Faisal Jawad, expressed some sympathy with opposition protesters in 2011 and faced vigilante attacks on his shops; in at least one case a supermarket he owned was looted by the police (an incident captured on CCTV).

There are also Sunni Bahrainis who are relatively poor. But for the past few decades, economic dissatisfaction hasn’t translated into so much opposition among these communities, which are suspicious of the mostly Shiite opposition leaders. Nonetheless, some of the country's fragmented Sunni movements criticize the authorities for corruption and inequality.

Over the past decade, there have been some efforts to clean up corruption at state-owned enterprises which were losing money. In a fascinating case, the state-owned Aluminium Bahrain took one of its foreign suppliers to court in the US for paying bribes to a senior member of the royal family.

It is alleged that new forms of corruption have emerged, especially in the opaque privatisation of public lands, gifted to royals or their allies at nominal prices, before being sold for a profit.

This was a key issue in 2011 protests around the country's Financial Harbour: the mainstream Shiite opposition movement, al-Wefaq had obtained leaked documents that appeared to show the harbour area, which had once been public land, being transferred to a private company chaired by the prime minister’s son-in-law. In mid-December this year, a report in the Financial Times detailed the activities of a private company owned by the royal court selling off reclaimed land in Bahrain and buying up luxury properties in London. These issues will resonate beyond the traditional opposition.

Now the downward slide of oil prices raises particular problems for Bahrain, the Gulf’s smallest oil producer. All of the Gulf countries are facing the prospect of declining government revenues, while pressures to keep government spending increasing have been intensifying since the Arab uprisings.

Bahrain’s budget has been in deficit every year since the uprising and the crackdown of 2011, as political risk has disrupted some economic activity while also spurring the government to increase spending. Last week, Moody’s, an international credit ratings agency, predicted that Bahrain’s fiscal deficit would widen to above 7 percent of GDP in 2015; the International Monetary Fund said it would need an oil price of $125 per barrel to break even.

Bahrain’s public debt rose to 44 percent of Gross Domestic Product (GDP) in 2013. This is low by European standards but a concern for the Gulf state whose wealthier neighbours were able, when oil prices were high, to save money for harder times to come.

After November’s general election, the country’s newly elected MPs - who have 40 out of 80 seats in parliament, with the rest being appointed by the king - are likely to be presented with plans to cut some public spending, especially on subsidies. Most of the MPs are broadly pro-government, as the country’s opposition groups boycotted the elections.

Yet although they may not take a strong line against the government on political issues, the experience of previous parliaments, as with others in the Gulf, suggests that they will be pushing for more economic benefits for their constituents, especially since most are independent MPs who don’t form part of a political or ideological bloc.

More than a quarter of public spending now goes on defence and security, and this is something parliament is unlikely to challenge, given the heightened influence of the security establishment since 2011, the government’s fears of Iran, and the leverage that Bahrain buys in the US and UK by offering to purchase military equipment on a large scale.

Beyond doling out more money, there are different views in the ruling establishment over the functions of inequality and discrimination.

The Economic Development Board (EDB), a body established in 2006 and chaired by the Crown Prince Salman bin Hamad al-Khalifa, has taken the view that addressing economic grievances, particularly around employment, would take much of the sting out of Bahrain’s political disputes. Traditionally the government has used economic benefits selectively to create incentives for political allegiance.

There is also a strand of thinking that the opposition should be punished for their “disloyalty” through economic means as well as political repression - and that issues of discrimination and hiring can be used as cards to play in political negotiations.

The EDB was weakened after the uprising and crackdown of 2011, as its “Business Friendly Bahrain” investment-promotion campaigns were damaged and as the Crown Prince and his investment-focused allies were weakened by the reassertion of power by the security establishment.

There are some signs the Crown Prince's allies are being re-empowered: in the post-election cabinet reshuffle, the long-serving minister of industry and commerce, Hassan Fakhro, who had held his post for 12 years, was replaced by Zayed al-Zayani, a businessman and associate of the Crown Prince.

Another Crown Prince ally, Isa Abdulrahman, the new information minister, replaces Sameera Rajab, a onetime spokeswoman for Saddam Hussein, who was deeply unpopular with the opposition.

A key factor to watch will be whether the new parliament and cabinet work to secure economic advancement for the Shia villages and to address issues of discrimination, since these are some of the core issues underlying the political unrest.