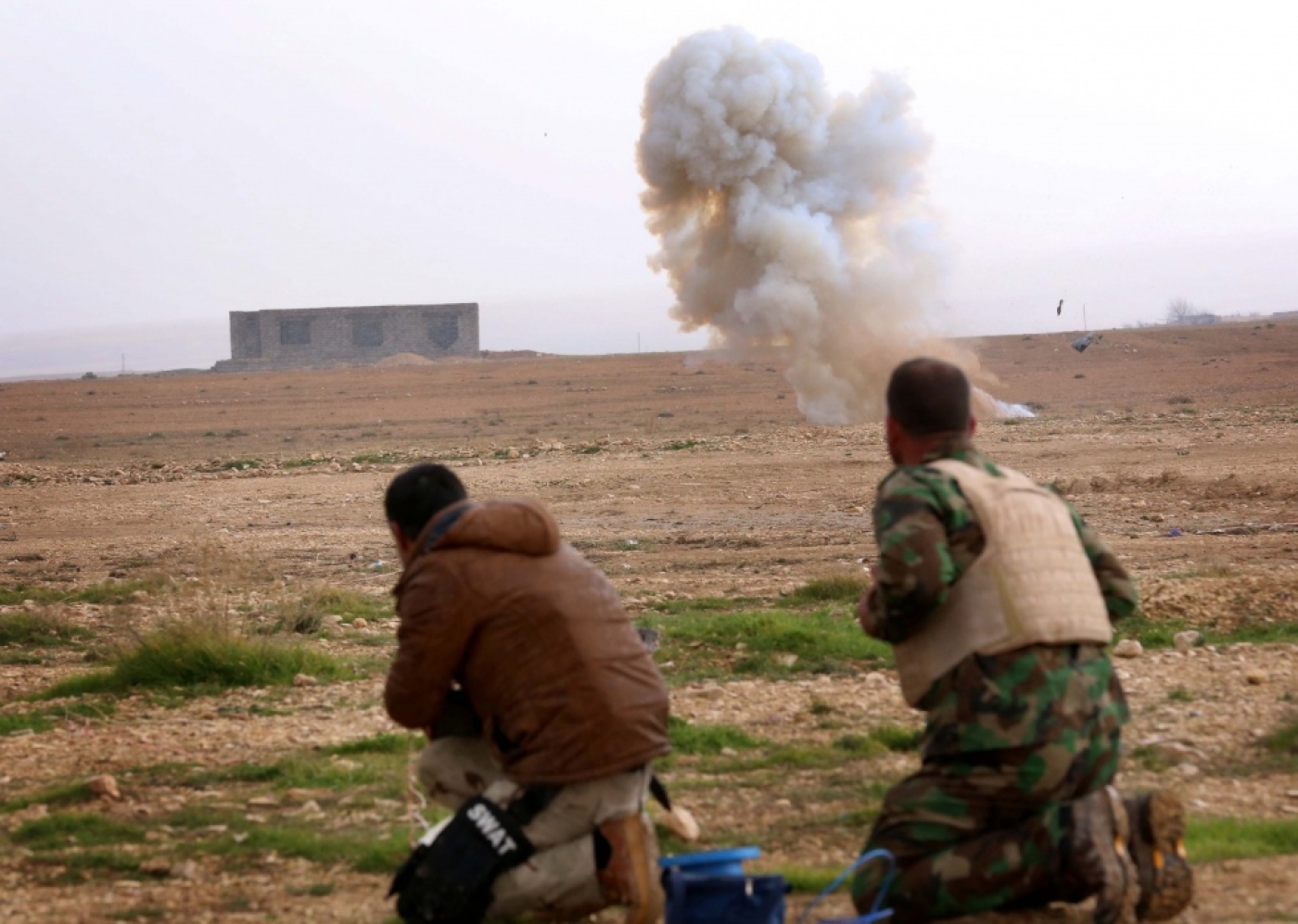 The gathering took place and resulted in disputes on how to deal with territories inhabited by Kurdish Yezidis in Sinjar, as many fear the disagreements over Sinjar will jeopardise attempts to defeat the Islamic State group (IS) in Mosul.

The news of the efforts to set up self-administration was followed by several statements by Kurdistan Regional Government (KRG) officials, denouncing the plan as a plot by the rebel PKK group to separate the Yezidi region from the Iraqi Kurds.

“The Yezidis have survived 72 genocides, and we faced the 73rd genocide recently. If the PKK doesn’t leave us alone, we will fight them as we fought the IS,” Qashim Shesho, the KRG’s Yezidi Peshmerga commander in Sinjar, told Middle East Eye.

But in public statements, the PKK rejected accusations that it is trying to separate the Yezidis from the KRG or was involved in setting up the meeting.

Dilsher Herekol, commander of the Sinjar Resistance Units group, denied by phone from Sinjar that the meeting was linked to the PKK. “The PKK didn’t establish this assembly and the PKK has nothing to do with the subject, they just attended as guests and support this attempt.”

“Some people are against this attempt, but they serve Erbil interests not Shingal" (Shingal is officially known as Sinjar), referring to the KRG government.

Historically, two main Kurdish parties – the PKK, led by imprisoned Abdullah Ocalan, and the Kurdistan Democratic Party (KDP), led by KRG President Masoud Barzani - have competed for influence over a population of 40 million Kurds and their territories.

During the Kurdish civil war in the 1990s, both parties briefly fought each other, with devastating consequences on the civilian population. Nevertheless, the PKK’s dominance remained limited to Turkey.

The PKK in Iraqi Kurdistan still controls small pockets of mountainous territory close to the border of Iran and Turkey. But its smaller sister party, the Kurdistan Democratic Solution Party (PCDK), despite participating in KRG elections, failed to gain any influence.

The PKK also tried to foster support among the Yezidis in Iraq, offering to send fighters to Sinjar when IS gained momentum in Iraq after taking Mosul, the country’s second largest city, in June.

“The PKK repeatedly tried to gain a foothold in Shingal but was prevented from doing so by the KDP,” explained Hayri Demir, editor-in-chief of Ezidipress, to MEE.

In August 2014, the PKK was presented with a new opportunity when IS captured Sinjar, and threatened Erbil, the capital of Iraq’s Kurdistan region.

The PKK saved many by establishing a corridor through Syria for the Yezidis fleeing the IS onslaught, while Barzani’s overpowered men were forced to withdraw from Sinjar. Barzani thanked PKK fighters individually on 13 August, for protecting the town of Makhour, not far from the KRG’s capital.

The PKK set up a separate Yezidi unit, the Sinjar Resistance Units (YBŞ), whose fighters were trained in a refugee camp in the Kurdish areas of Syria.

In an attempt to reassert its control over Sinjar, the KDP launched an assault last December to capture Sinjar back from IS, which also served as a message to the Peshmerga that it was still able to protect the Yezidis.

"Many Yezidis now see the PKK as their protector. But it's too early to tell if those feelings can translate into political support," said Cale Salih, a Kurdish affairs specialist and Visiting Fellow at the European Council on Foreign Relations.

When operations began just before Christmas, the KDP denied the PKK was involved in the operation. “Following the Sinjar setback, the KDP now wants to restore its reputation by claiming full credit for the retaking of Sinjar. But the PKK is not making it easy to do so,” Roman Zagros, manager of Insight Kurdistan, told MEE.

“The PKK sees it as their 'right' to own the Yezidi cause and help secure a safer environment for the community,” he said.

Fears for ‘cantonisation’ of Kurdistan

The KDP fears the PKK plans to establish a canton system in Iraqi Kurdistan, similar to the three canton administrations the PKK established in northern Syria. Before the Syrian civil war, Barzani’s party had backing among Kurds in Syria, but his supporters failed to gain any influence when the PKK started to militarily dominate the area after the civil war. Now, Barzani also risks losing support among Yezidis.

“In Shingal, the KDP has significantly lost its influence, which it wants to regain now tooth and nail. The PKK, on the other hand, tries to prevent that,” Ezidipress’ Demir told MEE.

“Establishing a canton by PKK in Shingal is overturning the authority in South Kurdistan [Kurdistan region] that has been recognised officially and internationally. This kind of step is serving the Kurdish enemies”, said Ali Awni, a leading official in the KDP, indirectly referring to Turkey, Iraq, Iran and Syria that oppose Kurdish independence.

The KDP wants the PKK to limit its influence to Turkey, where it was founded in 1978. “If they really want to serve Kurdistan, let them go and liberate one village from North Kurdistan [Kurdish areas in Turkey] and declare their canton there,” Awni added.

Although many Yezidis support more decentralisation, Iraqi Kurds in general, are not in favour of a canton system.

“The term canton certainly doesn't go down well with Iraqi Kurds in general, as it is largely associated with the PKK and its centralised ideology that hasn't appealed to Iraqi Kurds right from the start,” said Zagros.

“I think it will be hard for the PKK to create these structures in Iraqi Kurdistan where there is a strong political culture and tradition,” Salih told MEE. “It was easier for the PYD [PKK sister party] to create cantons in Rojava [Syria’s Kurdish areas] because the pre-existing Kurdish political tradition and culture was not as strong there [as it is in Iraqi Kurdistan],” she added.

But it might be difficult for the KDP to prevent more decentralised rule in Sinjar, since most Yezidis that either support the KDP or PKK are in favour of it. Therefore, the KRG deployed a Yezidi Peshmerga unit to the area in an attempt to regain their trust.

“The Yezidis in Shingal have never been in the position to make political decisions regarding their own region. Many see this as the reason that led to the current disaster,” explained Demir.

Christine van den Toorn, director of the Institute for Regional and International Studies at the American University of Iraq, Sulaimani, said: “I think Yezidis want their own autonomous region, protected by Yezidi and international force still. They still have no trust for the KRG and KDP.”

Many believe that the internal Kurdish divisions could benefit the Islamic State group; although both the PKK and Peshmerga secured the Sinjar mountains and the road to Sinjar, heavy fighting persists over the city of Sinjar itself. Moreover, internal divisions could hurt the upcoming offensive against IS in Mosul.

“Discussions about the future of the Shingal region have led to a division between Peshmerga and PKK units that are currently fighting IS in Shingal, resulting in less military cooperation. YPG and PKK units were not involved in the anti-IS offensive by the Peshmerga on 18 December. This could cumber the fight against IS in some circumstances,” Yezidi journalist, Demir said.

Van den Toorn, meanwhile, told MEE that she believes the divisions are helping IS stop the Kurds from fully taking over Sinjar. “I'd say that it's absolutely the case that lack of unity and infighting is 100 percent preventing [IS’] defeat in Sinjar, Many Peshmerga units aren't even fighting, so yes, obviously this is preventing a win.”

Capturing Sinjar would also help disrupt IS logistic lines from Syria. “Its not the KDP, KRG plan right now to retake the rest of Sinjar even though it could be done, which would be a huge blow to [IS], especially disrupting the supply line that runs from Mosul to Tel Afar to Raqqa. It's insane that no one has bombed this road and disrupted this route,” van den Toorn added.

Securing Sinjar, Demir added, will require compromises on both sides. “The region´s future cannot be decided neither by the PKK nor the KDP,” Demir explained. “I think it will finally result in Shingal getting self-administration structures but remaining part of the KRG. An agreement could be achieved through this compromise.”