ANALYSIS: Trump leaves Turkey free to lash Iran - but should it do so? 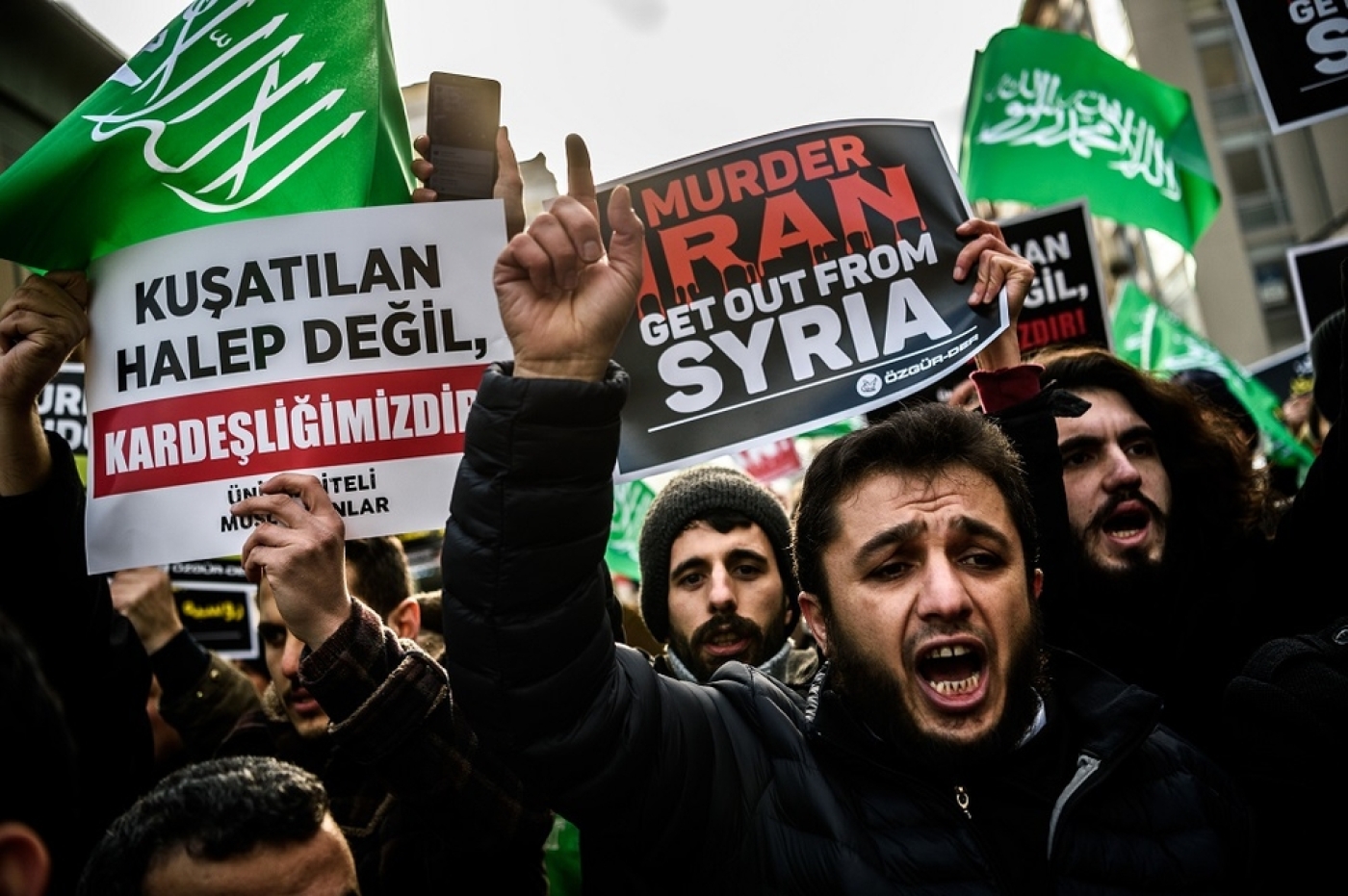 Protesters carry sign saying 'It is not Aleppo that is besieged, it is humanity' in Istanbul anti-Iranian march in December 2016 (AFP)
By
Suraj Sharma

ISTANBUL, Turkey – Turkey's president this month stood up in Bahrain to blame "Persian nationalism" for crises in the Middle East. Then his foreign minister accused Iran of engaging in "sectarian warfare" across the region.

It is a sudden hardening of rhetoric from Recep Tayyip Erdogan's government that coincides with US President Donald Trump putting Tehran "on notice" and as Russia seeks to sideline Iran's ambitions at talks on Syria.

All this is music to the ears of Saudi Arabia, Iran's arch regional foe, which has intensified its assault against the Tehran government on every level.

But analysts warn that while Ankara may feel similarly emboldened, it must be certain of its friends before joining any concerted assault on old foes.

Can Turkey and Russia push back Iran in Syria?

Iran and Turkey have never been easy bedfellows. One is a theocracy, the other a secular republic. One is majority Shia, the other Sunni. But the two regional heavyweights have for the most part maintained a semblance of good manners even in troubled times.

Analysts told Middle East Eye that the positions of the US and Russia on Iran clearly affect the stance of regional states like Turkey, but that both Ankara and Tehran need to be very clear about how much trust they wanted to place in Trump and Putin before facing off.

Ahmet Kasim Han, a professor of international relations at Istanbul's Kadir Has University, told MEE that Ankara might have been convinced to act following a spate of visits by high-ranking US officials, including the CIA chief and the top military commander, to Turkey over the last few weeks.

"It is likely that Turkey was given certain information during these visits prompting it to speak out against Iran, but we should remember that despite all the US rhetoric, they themselves haven't taken any action on Iran at all," said Han.

However, said Han, it would also be a mistake to put Turkey's actions solely down to the Trump administration's positions on Iran.

"Turkey has been feeling encircled for a while now. Iran has called the shots in Iraq and Syria to a large extent, making Ankara nervous and forcing it to face up to its foreign policy failures in those two countries," he said.

"It perhaps sees this as a good time to free itself of this encirclement but should be wary about not ruining one of its few foreign-policy successes of recent years.

"The most important question that needs to be asked though by any regional country is how much can either Trump or Putin be trusted."

'The most important question to be asked by any regional country, is how much can either Trump or Putin be trusted'

"Iran has not left peace for anyone in this region. Look at what they are doing in Iraq, Yemen and other places. It wasn't enough for them to create instability in those countries, but they are also trying to harm Turkey's ties with those countries like in Iraq," said Keskin.

He said Turkey had finally had enough and its change in stance had nothing to do with Trump.

"Trump's arrival on the scene is just timing but Ankara ran out of patience after so much instability created by Iran. It should keep up this pressure on Tehran because it will bring success and deter Iran from such meddlesome policies," he said.

In Han's view, Erdogan's remark in Bahrain was more nuanced than merely being a swipe at Iran.

"It was also meant to soothe Saudi and Bahraini concerns about a Turkish military presence in Qatar and convince them that Turkey is there to give them a helping hand as well in the face of any Iranian transgression," said Han.

Turkey enjoys strong ties with Saudi Arabia and the Gulf states but its strongest relationship in the region is with Qatar. Turkey even established a military base there last April.

This closeness has created unease in Saudi Arabia and Bahrain.

Russia and the Astana talks

There is also increasing talk that Russia, too, might seek to weaken Iran's hand, especially during the Astana process, a negotiating table set up by Moscow, Ankara and Tehran to oversee negotiations between various Syrian groups to ensure a ceasefire in Syria holds and that a path to a political solution is forged.

Dimitar Bechev, a non-resident senior fellow at the Atlantic Council, told MEE that Russia could possibly seek to weaken Iran's hand in Astana but would not cross any serious limits.

"Relations [between Tehran and Moscow] are not problem free. Each side will be jockeying for influence in Damascus. But Russia and Iran are complementary actors so any rivalry will be kept within limits," said Bechev.

'Relations [between Tehran and Moscow] are not problem free. Each side will be jockeying for influence in Damascus'

It is this jockeying for influence between Moscow and Tehran that Han believes Turkey might have observed during the Astana talks and - added to its own rapprochement with Moscow - could push it into a potential miscalculation regarding Iran.

"It is plausible that Russia will try to act like the big power and attempt to even weaken the hand of its intra-alliance partner in Syria," he said. "But it also realises that Syria has become a zero-sum game for Tehran and will be cautious of pushing it too much."

Han said the importance Iran places on Damascus is not to be underestimated as it considers Syria a vital forward defence.

"I don't think it is a joke when an Iranian official says losing a part of Iran's Arab-majority region is more acceptable than losing Damascus, because Damascus once lost cannot be regained but Iranian territory can," he said.

Both Bechev and Han are agreed that even if Russia seeks to weaken Iran's hand in Syria, it will in no way look to seriously undermine the alliance it has with Tehran. And both believe Moscow will not sell Iran short for better ties with the Trump administration.

"Iran has moved very close to Russia. It is a strategic hedge against US unilateralism," said Bechev.

"Both Moscow and Tehran will have red lines which the other will not cross regardless of small-scale power games between the two," said Han.

'The big powers don't share a border with Iran. Turkey does. It needs to be careful not to create another combustible situation on its borders'

Although analysts don't expect any serious escalation between Turkey and Iran, they warn about regional countries trusting Washington and Moscow too much because relying on them could spectacularly backfire.

"I don't believe there will be a major problem between Turkey and Iran nor do I believe that Iran will suddenly crumble under this new pressure," said Han.

"The Iranians will face pressure like never before but they are used to this and will engage on a different diplomatic tack.

"The big powers don't share a border with Iran. Turkey does. It needs to be careful not to create another combustible situation on its borders."

Even Keskin, who argued for a tough Turkish stance on Iran, is convinced that tensions should not be allowed to spill over into outright hostility.

"Both countries have experienced such spells in the past and know to keep their bilateral relations separate from regional ones," he said.

"It will be fine as long as it stays at the level of polemic and trading comments via media."