Coups in Turkey are often sparked by fears of creeping Islamism and the erosion of secular values. This one was different, say analysts The military faction knew it was on its way out, analysts say (AFP)
By
Suraj Sharma

Istanbul, TURKEY – There has for a long time been a widely held belief Turkey's next coup would be a reaction against creeping Islamism and the erosion of secular values. But what happened on Saturday was caused by something very different, analysts say.

Many observers believe the coup was a rushed attempt by military personnel with links to the Fethullah Gulen movement who knew they were going to get purged in the annual military appointments meeting held every August.

“It resembles a last-gasp desperate suicidal attack by these members of the parallel organisation who knew their time was nearly up,” said Ibrahim Kiras, the editor-in-chief of the Karar newspaper, which represents the liberal wing of the ruling Justice and Development Party (AKP).

Fethullah Gulen is a Muslim preacher living in self-imposed exile in the US who went from being a former close ally of Turkish President Recep Tayyip Erdogan to an arch-foe after his followers brought corruption allegations against Erdogan and his close circle in 2013.

Ever since, the government has accused Gulen of leading a terrorist organisation, which it says has sought to infiltrate all of Turkey’s state mechanisms and topple its leaders.

The Gulen movement has denied any involvement in Friday’s attempted coup.

Previous coups in Turkey have almost always been led by staunchly Kemalist generals who were often of the opinion that the country’s secular values were being eroded.

Coups have taken place in 1960, 1971, 1980 and a bloodless "postmodern coup" 1997. Islamist government of the day was forced to resign after tanks simply took to the streets.

Kiras told Middle East Eye the manner in which events unfolded clearly shows a sense of panic among the perpetrators and dismissed evidence of careful planning.

According to news reports and statements from officials and evidence, the strikes were well-planned and even targeted the building Erdogan was staying at while holidaying in the Aegean resort town of Marmaris.

Among civilians killed were advertising executive Erol Olcak, the main man behind the AKP’s promotional material, and Ilhan Varank, the brother of Mustafa Varank, a close and senior adviser to Erdogan.

But Kiras said he did not believe they were specifically targeted: "They just happened to be among the crowds fighting for democracy. I am not saying some measure of planning didn’t exist, but it couldn’t have been that detailed."

Ali Turksen, a former colonel in the Turkish Armed Forces, agrees with Kiras’ assessment as to who was behind the attempted putsch but differs when it comes to the planning involved.

“Yes, it was a kamikaze style move by the Gulenists in the military. They knew their time was up and took this desperate measure,” Turksen told MEE. “They would have known they wouldn’t get popular support or backing from anyone in the armed forces.”

But he says the way events unfolded means there had to be long-term planning involved.

“It would be impossible to arrange, coordinate and deploy such a large number of helicopters and fighter jets without precise prior planning,” said Turksen.

The country has suffered a deep wound as a result of this attempted coup and will take a long time to heal, said Kiras.

“We know from experience the disastrous effects of coups. Now we will see that even unsuccessful coups leave deep scars that will take a long time to heal.”

In Turksen’s view, the reputation of the Turkish military will take a battering.

“People will lose trust. They will ask how could such people be part of the armed forces for such a long time without being detected,” he said. “People will also remember images of police overpowering soldiers and of soldiers being lynched by civilians. None of this will enhance the reputation and trust in the military.”

Turksen said he did not believe that the inability to detect such a major plan could be put down to the failure of military intelligence.

“The Turkish armed forces are governed by very rigid internal practices. Even if there are doubts about certain personnel, it is very difficult to pursue the matter because solid evidence is required,” he said.

“This of course doesn’t mean that the military was aware of an impending coup attempt and did nothing about it. In general it is difficult to accuse personnel in the military though.”

Turksen said the coup would have long-reaching effects on the future of Turkey.

“All this will do is strengthen President Erdogan’s hand in his quest for a presidential system, which I believe is wrong for this country.

"The aftermath of these events will only play into the hands of the AKP and president. The country will lose as a result in any case,” he said.

Kiras, however, hopes it will prove a turning point where a deeply polarised society will pull together and political parties will cease their razor-sharp rhetoric against each other.

He found the common stance of all political parties in condemning the coup attempt and standing up for democracy as heartening.

“We need to look for the light at the end of this dark tunnel. I hope the ruling party as well as the others use this solidarity where we proved we can come together as a nation as a stepping stone to build a better future for us all.” 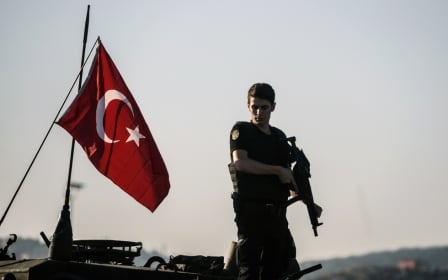