Faustina Tay, 23, was found dead hours after she reported abuse by her employers and expressed desire to go home 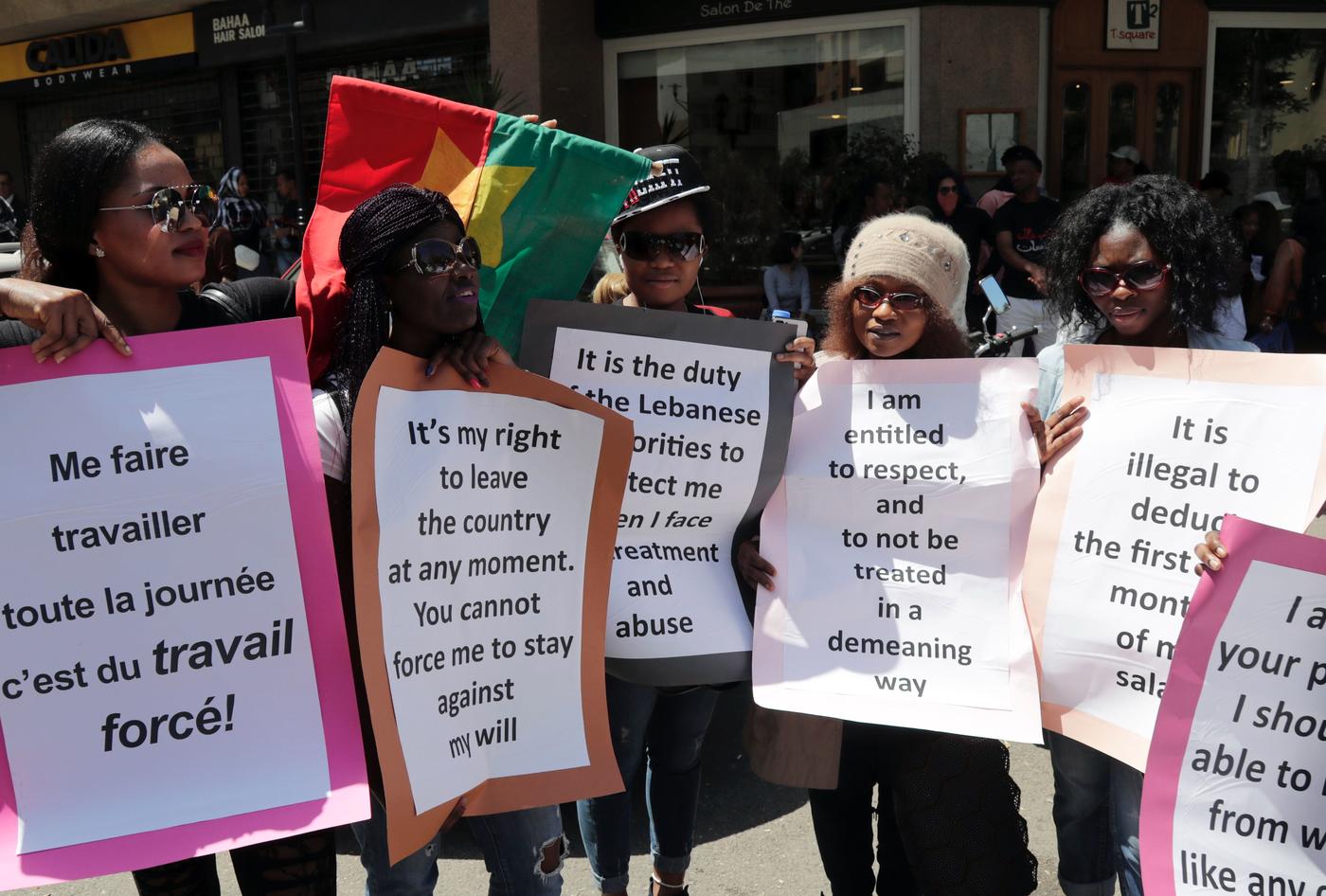 Lebanon has previously come under scrutiny for the Kafala system, where the residency of foreign workers is tied to the sponsorship of their employer, often leaving them with no protection under Lebanese law (AFP)
By
Yasmina Allouche

The suspected suicide of Faustina Tay, a 23-year-old domestic worker in Lebanon, has renewed calls for the country to abolish its controversial kafala system.

Tay's body was found in a car park below her employer's building in Beirut on 14 March, shortly after she sent a final plea for help.

Prior to her death, Tay, a Ghanaian national, sent dozens of texts and voice messages to human rights groups and her brother, which detailed physical abuse by her employers, a charge they have denied.

After her story was published by Al Jazeera on 24 March, users took to social media to express their anger and to call for Tay's employers to be brought to justice.

"The horrendous treatment of migrant women in Lebanon has been going on for so long. The country and the people should be ashamed of itself. There are too many stories. Rest in power Faustina Tay," one user on Twitter wrote.

"This has really shaken me up. She was 23. What can we do for Faustina Tay?? Someone please advise me?" one pleaded.

Lebanon has nearly 250,000 migrant domestic workers who are given the right to work in the country via the kafala system, a common form of sponsorship used across the Middle East.

While workers under Lebanon's Labour Law are guaranteed certain rights, under the kafala system, if an employer ends a contract with a domestic worker - even in cases of abuse - the worker loses their migration status.

Faustina Tay was bound by modern day slavery. There is no other way except to provide safe and dignified job opportunities for women like Tay within Africa so they don't have to be subjected to the brutalities of the Kafala system in the middleeast. https://t.co/htlRALHJZc

Sharing the same experiences as countless others who have made the same journey, Tay soon found herself in exploitative work conditions where she was overworked and was not allowed enough rest at night in the kitchen she was forced to sleep in, Al Jazeera reported.

Unable to take the abuse any longer, she made the intention to leave in January. However upon hearing the news, her employer, Hussein Dia, and the owner of her recruitment agency, Ali Kamal, beat her, Al Jazeera reported.

She was later promised that if she worked two more months, she would be allowed to return to Ghana with the money she had made.

"I'm scared; they might kill me," she said in one message. Fearing that speaking about her ordeal could lead to more abuse as well as result in her phone being confiscated she said: "Please, help me. Help me to go back to my country for treatment. Please, I don't want to die here."

Tay sought help from a small volunteer-based organisation based in Canada, This is Lebanon, which is run by a coalition of former domestic workers and activists seeking protection for migrant domestic workers, and an end to labour exploitation and abuse in Lebanon.

Patricia, Tay's case worker, spoke regularly with her and described her as having "hope".

"There was zero possibility she would plunge head first off the balcony less than 24 hours after we last talked," Patricia told Middle East Eye. "Something happened after we lost contact which lead to her murder."

"I will forever have to live with the sorrow of her death. It has shaken the whole team. Our only hope is that it will serve as a wake up call to the entire nation of Lebanon and the aboltion of kafala slavery.

"Let every Lebanese take a good, hard look at Faustina."

The group has named and shamed abusive employers in Lebanon and as a result, their Facebook page has become a ‘hotline’ for abused domestic workers who have no one else to turn to.

"We are well aware of the 'suicide' script used by abusive employers and Lebanese authorities to frame horrific murders of domestic workers in Lebanon," Sara, a case worker, told MEE.

"We at This is Lebanon believe this was a murder. What facilitates these murders is the fact that no Lebanese citizen has ever been prosecuted for the abuses committed against vulnerable migrant workers. This judicial failure is killing women and it needs to end now."

According to statistics from Lebanon's General Security Intelligence Agency, two workers die every week, some committing suicide while others escape by jumping off buildings.

Speaking to MEE, Aya Mazjoub, a researcher at Human Rights Watch, explains how the kafala system in Lebanon has long facilitated the abuse of migrant domestic workers.

"The kafala system essentially ties the worker's legal residency in the country to her employer, and it does not give the worker the right to terminate the contract without her employer's consent.

"This system traps workers in abusive situations from which they are unable to escape, as leaving the employer would mean losing legal residency in the country and risking detention."

In Lebanon and across the Arab peninsula, workers mainly from Southeast Asia and Africa, are often denied their wages and time off, deprived of food and proper accommodation, and often have to endure physical and sexual abuse.

Lebanese recruitment agencies will often liaise with smugglers and travel agencies in the countries of domestic workers to bring them to Lebanon, and once they are handed over, many are then subjected to abuse.

Statistics published by local NGO, The Legal Agenda, which defends abused workers in court, show that 54 percent of Lebanese employers do not give days off, with a further 23 percent locking in their maids whenever they go out.

According to Mazjoub: "Even when workers file complaints, the police and judicial authorities regularly fail to treat certain abuses against domestic workers as crimes."

The former labour minister, Camille Abousleiman, has previously formed a working group to recommend ways to reform the kafala system and the current labour minister, Lamia Yammine, has expressed a commitment to take this work forward.

"Ultimately, the only just solution will be to amend the labour law so that it includes migrant domestic workers and completely abolish the kafala system." 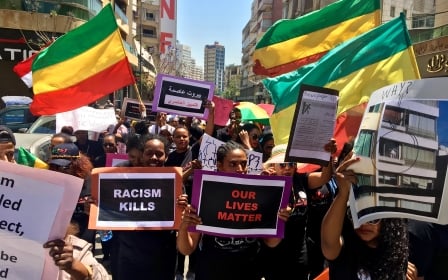 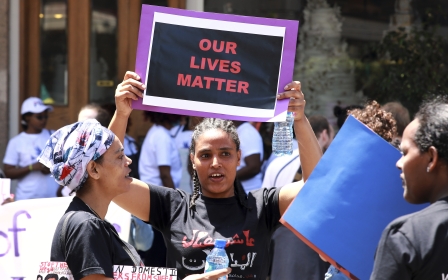 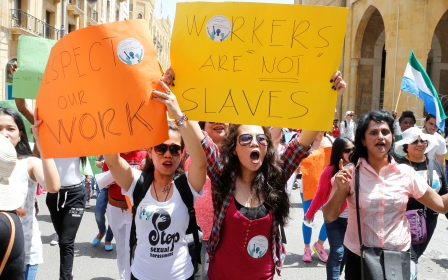