A controversial national security aide of US President Donald Trump with a history of anti-Muslim statements is on his way out of the White House, CNN and ABC reported citing administration officials.

Sebastian Gorka, a former editor for right-wing news website Breitbart, has drawn criticism for alleged ties to a Nazi-linked Hungarian group, Islamophobic policy proposals and his suggestion to divide Libya into three countries.

Gorka was appointed by Trump as a deputy assistant to the president and answered directly to chief strategist Steve Bannon.

The national security expert has praised Trump for using the term “radical Islamic terrorism” when describing militancy. He argues that the cause of terrorism is rooted in Islamic theology, not geopolitical, social or economic factors.

Critics have described him as a conspiracy theorist.

In 2014, he argued that an interfaith event in Washington, DC was planned by Muslim groups to coincide with the declaration of Islamic holy war by the last Ottoman sultan in the first World War.

Gorka was born in Britain to Hungarian parents. He studied international relations in Budapest, before moving to the United States where he became a citizen in 2012.

Concern about Gorka’s ultra-nationalistic rhetoric started to grow when Forward reported in April that it obtained a video where the White House aide explicitly expresses support for the Hungarian Guard, a militia branded as "racist" by the European Court of Human Rights. A previous report in March accused Gorka of being a sworn member of the Nazi-linked group Vitezi Rend.

“His presence in the administration is shameful, but not surprising. Other hires like Stephen Bannon and Stephen Miller show that this administration is an enabler of anti-Semitism, racism, and anti-Arab and anti-Muslim bigotry,” the statement read.

“Gorka should have never been hired and has no place in any administration. He should step down immediately.”

The Council on American-Islamic Relations (CAIR) also urged Trump in April to dismiss Gorka, saying it is “astounding that an individual with alleged links to racist and anti-Semitic groups still has a policy-making job in the White House.”

Gorka is married to Katharine Gorka, a member of Trump’s Department of Homeland Security transition team, who has also been accused of anti-Muslim bigotry. 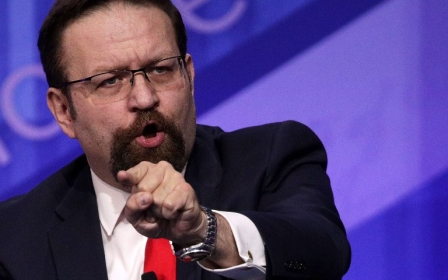