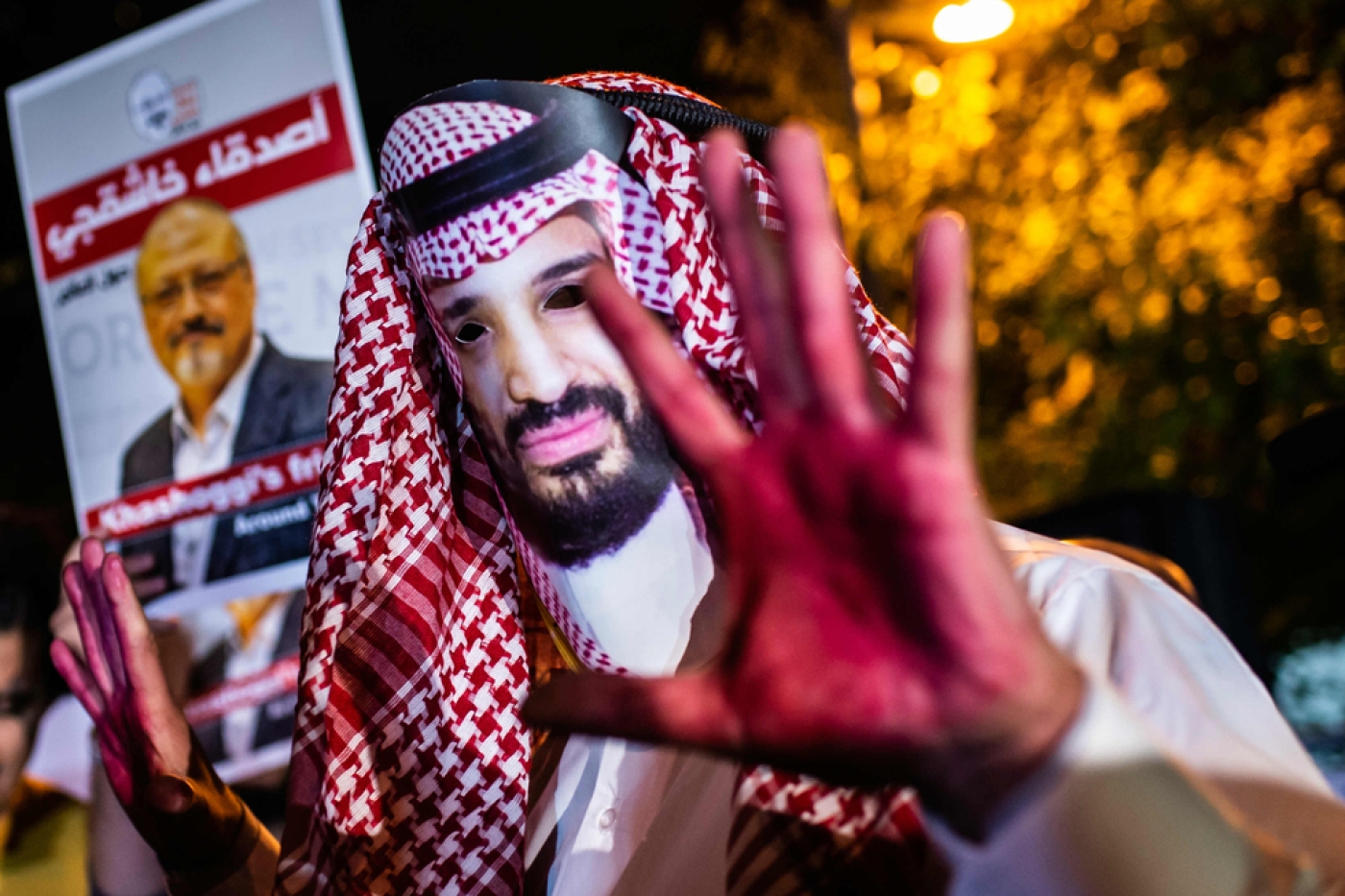 The Saudi officer, Erdogan said, posited the theory that whoever was responsible “must have taken heroin”.

Speaking to the Turkish media on his return from France, the president was adding yet more public pressure on Riyadh over the assassination of Khashoggi in the Saudi consulate in Istanbul.

The audio recording, which is thought to include both Khashoggi’s murder and the plotting of a 15-man Saudi death squad sent to kill him, has allowed Turkish officials to reveal gruesome details of the killing to the world and place Riyadh under intense pressure.

Over the weekend, Erdogan acknowledged the recording’s existence officially for the first time, and revealed it had been shared with the United States, Britain, France, Germany and Saudi Arabia.

The recordings are really appalling. Indeed when the Saudi intelligence officer listened to the recordings he was so shocked he said: 'This one must have taken heroin'

The Turkish president told reporters on his plane back from France that he discussed the Khashoggi case with French, German and US leaders over dinner.

"We played the recordings regarding this murder to everyone who wanted them from us. Our intelligence organisation did not hide anything. We played them to all who wanted them, including the Saudis, the USA, France, Canada, Germany, Britain," he said.

"The recordings are really appalling. Indeed when the Saudi intelligence officer listened to the recordings he was so shocked he said: 'This one must have taken heroin, only someone who takes heroin would do this'."

Canadian Prime Minister Justin Trudeau said on Monday that his country’s intelligence services have also listened to the audio, though French Defence Minister Jean-Yves Le Drian denied his country’s had.

Erdogan's communications director then blasted Le Drian for the denial.

The UK’s foreign office told MEE “we are neither confirming nor denying the claims” that the recording had been shared with Britain.

Erdogan’s latest comments come as Turkish newspaper Sabah, which is close to the government, published X-ray images purportedly of some luggage that Saudis suspected of killing Khashoggi carried as they left Istanbul.

In them, Sabah reports, were several highly suspicious and incriminating items, bolstering the theory that Khashoggi was dismembered and the victim of a premeditated murder.

MEE previously reported that Khashoggi was injected soon after he entered the consulate on 2 October.

According to Sabah, the bags were loaded onto two planes that left Istanbul for Riyadh soon after Khashoggi’s death, the first at 15:20 GMT and 19:46 GMT.

“Three large staplers could be brought in order to prevent leakage from the bags after the body was cut up and broken down by the execution team,” Sabah said.

Turkish sources previously told MEE that Khashoggi’s body was swiftly cut into 15 pieces. Turkish officials now believe that his remains were dissolved in acid and poured down the consulate’s drain.

However one bag that was not checked, MEE understands, was that of Maher Abdulaziz Mutrib, a member of Crown Prince Mohammed bin Salman’s security detail that left Istanbul on an earlier flight with diplomatic immunity.

Links to the crown prince

Under pressure, Saudi Arabia has moved from claiming Khashoggi left its consulate untouched, to acknowledging he died, to admitting he was murdered by a death squad sent to kill him.

Riyadh has arrested 18 people over the murder, including 15 members of the death squad.

The kingdom insists that the heir to the Saudi throne was oblivious to the plot to kill Khashoggi and the botched cover-up.

However on Monday the New York Times reported that Mutrib told one of his superiors over the phone to “tell your boss” that the operation was complete.

US intelligence officials believe that the “boss” in question could only mean bin Salman, the NYT reported.

The Saudi crown prince is a close ally of US President Donald Trump, and on Tuesday National Security Advisor John Bolton attempted to contradict the NYT’s intelligence sources’ claims.

When asked if the audio links Khashoggi’s murder to the crown prince, Bolton said: “That’s not the conclusion I think that the people who heard it have come to, and that’s certainly not the position of the Saudi government.”

“The president has made it clear he wants to get to the bottom of this,” he added.

Erdogan has said that the “highest levels” of the Saudi government are responsible for the crime and must be held to account.