While Saudi Arabia is a staunch US ally, there is very little that average Americans know about its people beyond the "political discourse of media outlets and government officials," according to the Arab American National Museum.

To help remedy this situation, the Dearborn, Michigan-based museum will feature the work of more than a dozen contemporary Saudi artists in Epicenter X, an exhibit from 8 July to 1 October.

The art project, which coincides with tensions in the Gulf region and growing political scepticism towards Saudi Arabia in the US, aims to promote dialogue between Americans and artists from the kingdom, Devon Akmon, director of the museum, told Middle East Eye.

The exhibition will feature pieces that depict aspects of life in Saudi Arabia. Some works also relate to international relations and universal questions about identity and politics.

One digital print that will be on display, for example, is titled Ahlan wa Sahlan, which means "welcome" in Arabic. It features intertwined prints of the words in Arabic calligraphy in red and orange forming a frame for one more "Ahlan wa Sahlan” in blue in the middle of the illustration.

The work, by Saudi graphic designer Yusef Alahmad and Josh Higgins, a creative director at Facebook, is a reaction to Donald Trump's "Muslim ban".

A piece by Saudi artist Musaed Al Hulis, dubbed Ideologies for sale, consists of a street vending cart with a mosque's minaret on top of it.

I try to present art that shows positive connections that people share individually and collectively, locally and globally

"Cutting through the political discourse of media outlets and government officials, the artworks featured in this exhibition open doors to the lives of the Saudi people," the museum said in a statement.

"In doing so, this presentation will challenge common views and stereotypes of Arab culture by lending a voice to artists exploring poignant ideas centered on urbanization, globalization, religion and the impact of American popular culture in Saudi society."

Akmon said the artists who will be featured in the show are "at the vanguard of artistic production" in Saudi Arabia, adding that the exhibition includes "very strong social commentary".

Asked about restrictions on freedom of expression in the conservative kingdom, Akmon said it demonstrates courage for Saudi artists to produce work that doesn't portray social affairs in their own country in the best light.

Dearborn is home to a religiously diverse Arab population, hailing from Lebanon to Iraq to Yemen, where some people strongly oppose Saudi policies and the kingdom's conservative interpretation of Islam and its penal code.

Akmon said the exhibition is more about the open exchange of ideas, not politics, adding that the museum is not working directly with the Saudi state on the project. He dismissed the notion that Epicenter X promotes Saudi Arabia.

"I think you would have a very hard time leaving the exhibit saying, 'Oh, this is trying to make Saudi Arabia look great,'" he told MEE.

Akmon pointed to a photo of a piece by artist Qamar Abdoulmalik - an arcade “grab 'n' go" machine filled with passports. "Send 'asylum' to 601456 to win the passport of your dreams," reads a sign on the interactive crane machine game.

"What she’s critiquing essentially is the refugee crisis," he said.

Ayman Yossri Daydban, a conceptual artist born in Palestine and raised in Saudi Arabia, said his work speaks to his lack of a sense of belonging or clear identity.

"We are in a time when identities can lead to your happiness or struggle, and because there are layers of identity, knowing who you are is a self-defence mechanism," he told MEE.

Bridging cultures is apparent in some of his works that will be on display at Epicenter X, including illustrations of screenshots of American movies with Arabic subtitles. He said he takes the scenes out of context with the Arabic captions, giving them a whole new meaning.

One tableau shows the Statue of Liberty with the subtitles: "It will not be an easy matter."

Daydban, the Arab American museum's first resident artist, said his art attempts to be constructive, and he stays away from criticising aspects of society that are known flaws.

"I try to present art that shows positive connections that people share individually and collectively, locally and globally," he said. "Personally, I don't look to highlight the negative side of things because it is very obvious. Rambling about negative things is a point of weakness." 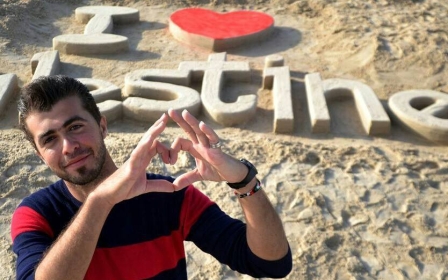 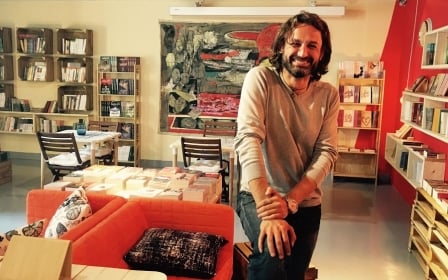