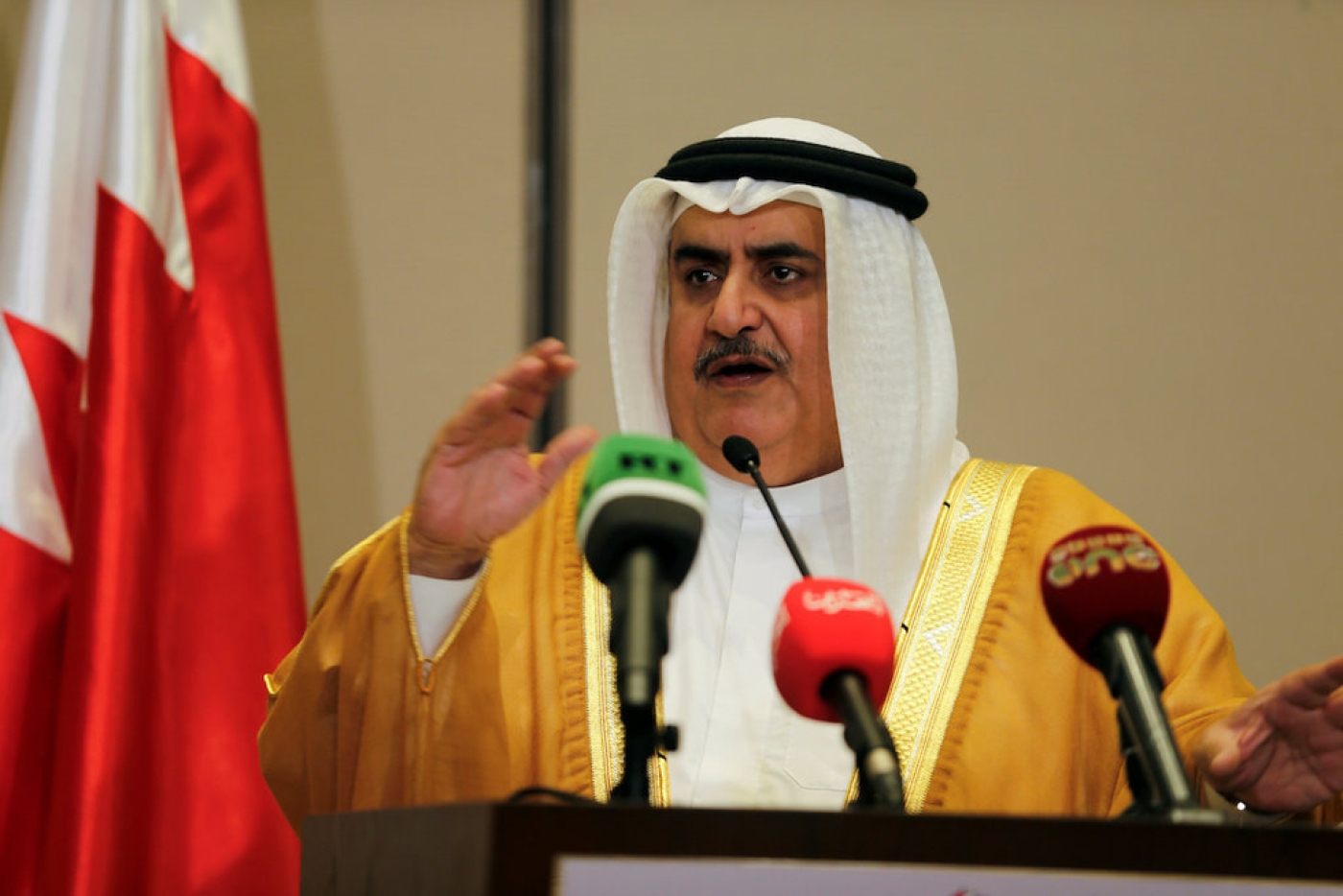 Bahraini foreign minister Sheikh Khalid bin Ahmed al-Khalifa speaks to media after the foreign ministers of Saudi Arabia, Bahrain, the United Arab Emirates and Egypt meeting in Manama to discuss their dispute with Qatar (Reuters)
By
MEE and agencies

The foreign ministers of four Arab states boycotting Qatar said on Sunday they would make no compromises in their demand that Doha change its policies, as a political crisis that has split the Gulf approaches its third month.

The foreign ministers of Saudi Arabia, the UAE, Bahrain and Egypt, who met in the Bahraini capital on Sunday, said they were open to talks with Qatar on condition it "stops its support and financing of terrorism".

"We reiterate the importance of Qatar's compliance with the 13 demands outlined by the four states," said a joint statement released on Sunday.

The Saudi-led bloc in June issued the list of demands for the lifting of sanctions, including the termination of regional news giant Al-Jazeera, the downgrading of ties to Iran and the closure of a Turkish military base in the country.

Bahrain's foreign minister said that the Arab states were still open for dialogue with Qatar.

"The four countries are ready for dialogue with Qatar with the condition that it announces its sincere willingness to stop funding terrorism and extremism and its commitment to not interfere in other countries' foreign affairs and respond to the 13 demands," Sheikh Khalid bin Ahmed al-Khalifa said.

The pan-Arab al-Hayat newspaper reported on Sunday that the blockading countries were expected to discuss imposing new economic sanctions on Qatar.

Foreign ministers of the four countries "are expected to impose sanctions that will gradually affect the Qatari economy", the newspaper said, citing unidentified Gulf sources, without giving any further details.

King Hamad called for "the solidarity of all Arab countries in fighting terrorism and cutting off its financing ... for the defence of our homelands".

What's behind this crisis, of course, is Qatari sovereignty and independence to put it very simply

Diplomatic efforts led by Kuwait and involving the United States and Turkey have failed to end the row, which has affected travel and communications between Qatar and the four countries and led to harsh verbal exchanges in the media.

Saudi Arabia has closed its land border with Qatar while all four countries have cut air and sea links with Doha, demanding the gas-exporting country take several measures to show it was changing its policies.

Turkey and Iran have stepped in to provide fresh produce, poultry and dairy products to Qatar instead of Saudi Arabia and the UAE, with Oman providing alternative ports to those in the UAE.

The four Arab countries added 18 more groups and individuals they say are linked to Qatar to their terrorist lists last week.

Kuwait is leading mediation efforts in the crisis, the worst to grip the region since the 1981 creation of the six-nation Gulf Cooperation Council.

Kuwait and Oman - GCC members along with Saudi Arabia, the United Arab Emirates, Bahrain and Qatar - have not joined the Qatar boycott.

On Friday, Qatar said it would never bow to Saudi-led demands to "outsource" its foreign policy to resolve the Gulf crisis.

"What's behind this crisis, of course, is Qatari sovereignty and independence to put it very simply. It is about ... outsourcing our foreign policy so that decisions are not made in Qatar, and that is something that will never be acceptable," he told AFP.

Sheikh Saif said the Saudi-led bloc had laid down a new "ultimatum" on Tuesday by publishing a list of individuals and "terrorist" entities allegedly linked to Doha.

The blacklist contained nine organisations and nine individuals the Saudi-led bloc accuses of supporting terrorists with finances from Qatar.

This "list, it's still an ultimatum, it's still something that is stalling resolving the crisis," the official said.