At least 84 people were killed Thursday when a truck ploughed into a crowd in the French Riviera resort of Nice during Bastille Day celebrations, the latest attack in a country still reeling from last year's attacks claimed by the Islamic State (IS) and other groups.

Here is a recap of major attacks and foiled attempts since the Charlie Hebdo shootings in January 2015:

- 7-9 January, 2015: Two men armed with Kalashnikov rifles storm the Paris offices of satirical weekly Charlie Hebdo killing 12 people including eight cartoonists. A policewoman is killed just outside Paris the following day, while a gunman takes hostages at a Jewish supermarket, four of whom are killed. The Charlie Hebdo attackers and the hostage-taker are killed in separate shootouts with police, but not before claiming allegiance to al-Qaeda and IS respectively.

- 3 February: Three soldiers guarding a Jewish community centre in Nice on the French Riviera, are attacked by a knife-wielding man. The 30-year-old assailant, Moussa Coulibaly, is arrested. In custody, he expresses his hatred for France, the police, the military and Jews.

- 19 April: Sid Ahmed Ghlam, an Algerian IT student, is arrested in Paris on suspicion of killing a woman who was found shot dead in the passenger seat of her car, and of planning an attack on a church in the Paris suburb of Villejuif. Prosecutors say they found documents about al-Qaeda and IS at his home, and that he had been in touch with a suspected militant in Syria about an attack on a church.

- 26 June: Frenchman Yassin Salhi, 35, kills and beheads his boss Herve Cornara and displays the severed head on the fence of a gas plant surrounded by Islamic flags. He tries to blow up the factory at Saint-Quentin-Fallavier in southeast France, but is arrested. He commits suicide in his jail cell in December.

- 13 July: Four young men aged 16 to 23, including a former soldier, are arrested on charges of planning an attack on a military camp to behead an officer in the name of religious warfare. They proclaim allegiance to IS.

- 21 August: American, British and French passengers prevent an attack on a high-speed Thalys train from Amsterdam to Paris, tackling a man who opened fire on passengers. He was armed with a Kalashnikov assault rifle, an automatic pistol and a box-cutter. The gunman is identified as 25-year-old Moroccan national Ayoub El Khazzani, known to intelligence services for links to hardline groups similar to IS.

- 13 November: Nine men - most of whom had fought alongside IS militants in Syria - unleash explosives near the Stade de France stadium and open fire on people enjoying a night out at bars and restaurants in Paris, and at the Bataclan concert hall that lies just a short walk from where the Charlie Hebdo cartoonists were killed. In all, 130 people lose their lives and 350 are wounded. On 14 November, IS claims responsibility.

- 18 November: A teacher at a Jewish school in the southern city of Marseille is stabbed by three people shouting anti-Semitic obscenities and expressing support for IS. The man, himself Jewish, is injured in the arms, legs and stomach.

- 1 January 2016: A Frenchman of Tunisian origin tries to run down troops guarding a mosque in the southeastern town of Valence. He is charged with attempted homicide after telling emergency responders he "wanted to be killed by soldiers and to kill soldiers… a way for him to appear like a martyr".

- 7 January: A man wielding a meat cleaver and carrying the emblem of IS is shot dead as he tries to attack a police station in Paris. Convicted of theft in 2013, the man identified himself at the time as Sallah Ali, born in the Moroccan city of Casablanca in 1995.

- 13 June: Police officer Jean-Baptiste Salvaing, 42, and his companion, Jessica Schneider, 36, are killed at their home in Magnanville, west of Paris, by Larossi Abballa, 25. Salvaing is stabbed to death, while Schneider’s throat is slit in front of their young son. Abballa is killed by a police SWAT team, but had already claimed the murders on social media in the name of the IS group.

There is no immediate claim of responsibility but prosecutors say the probe will be handled by anti-terrorism investigators. 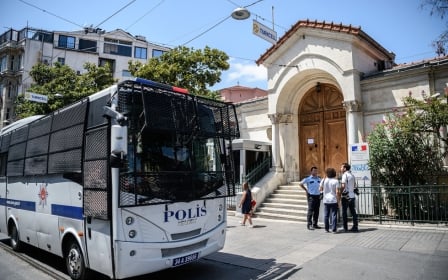