Israel and Turkey-made crafts are giving Baku the edge in the region's latest war, leaving mounds of rubble in the city of Shusha 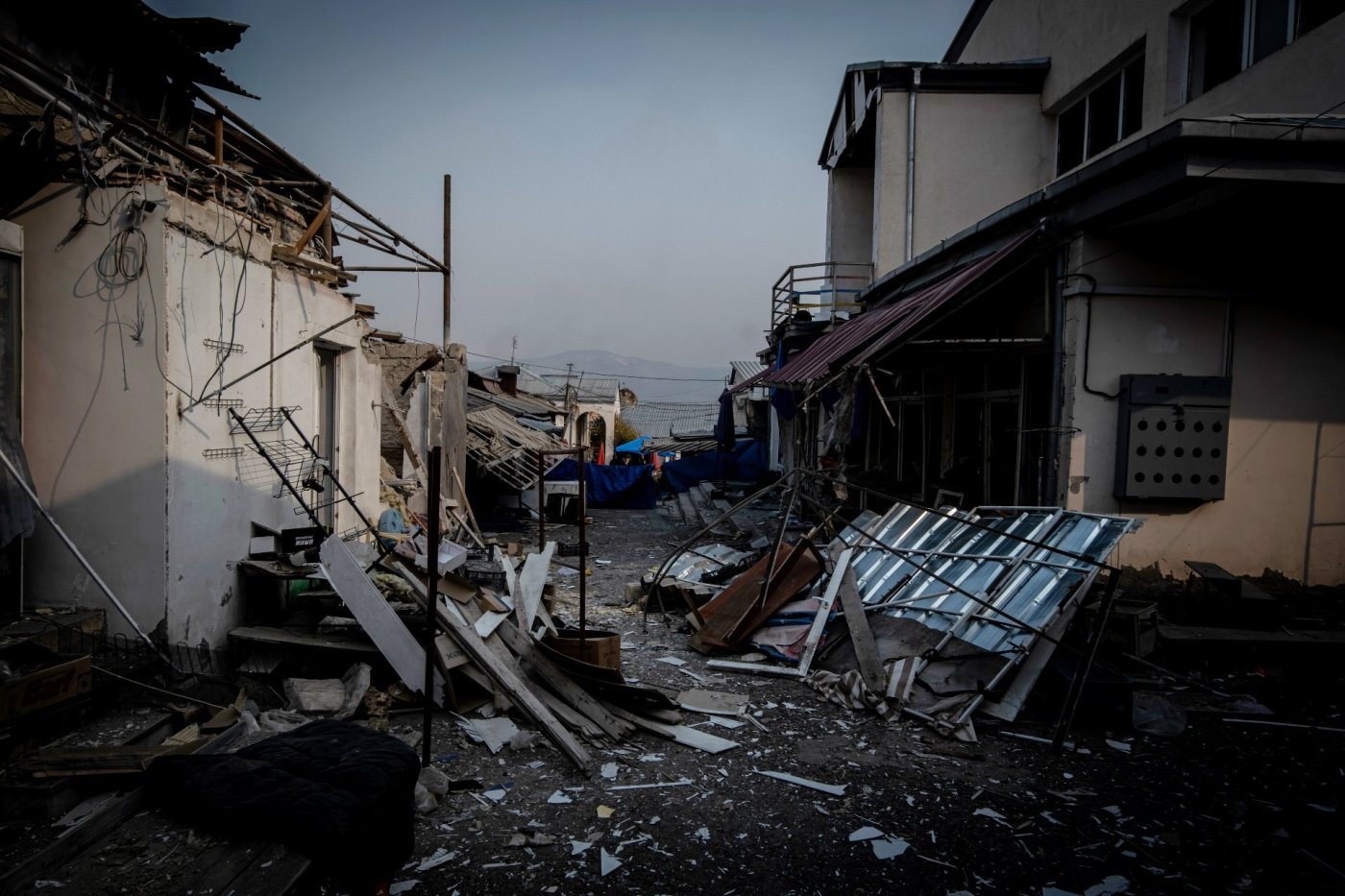 By
Karlos Zurutuza
in
Shusha, Nagorno-Karabakh

In a basement in Stepanakert (known as Khankendi in Azeri), the capital of the disputed region of Nagorno-Karabakh, Armenian fighter Bilad has what he believes to be the remains of an Israeli drone.

“It's bits and pieces gathered by our soldiers. We have removed the camera and the electronics but we're sure it's a Harop, one of those kamikaze drones,” explains the soldier, whose carefully trimmed beard is offset by heavy bags under his eyes.

It’s been weeks since Bilad had a proper night’s rest. On the morning of 27 September, Baku launched a major offensive against Nagorno-Karabakh, an unrecognised breakaway region that is officially part of Azerbaijan but is run by ethnic Armenians.

The conflict dates back to the middle of the Gorbachev era in 1988, and it's the longest-running unresolved dispute in the former Soviet Union. The ongoing fighting is the worst seen here in decades. Conventional Armenian forces can barely cope with Azerbaijan’s air power, an invisible enemy holding superiority in the skies, razing buildings to the ground.

After six weeks of heavy shelling, Azerbaijan is currently pummelling Shusha, a strategic location on the road used to bring supplies from Armenia.

Shusha (known as Shushi in Armenian) also overlooks Stepanakert: it is the perfect spot to shell the breakaway capital as well as a point to sever vital supply lines.

Stray dogs in the debris bark at the noise of explosions. Every day the piles of rubble grow.

The destruction of the historic church of Ghazanchetsots on 7 October seemingly paved the way for a chain of attacks that hit residential blocks and schools, as well as a cultural centre. Its solitary piano and red velvet seats are now covered in pieces of the ceiling, following an air strike last week.

“How could I possibly defend myself against such an enemy?” he adds, pointing at his Kalashnikov rifle lying next to the mattress where he spends every night.

Gevor’s wife and his two-year-old daughter fled to the Armenian capital Yerevan last week, just when the air strikes started to get too heavy here. In fact, only men can be found in Shusha today, and one has to look for them underground.

Samvel, 51, is also among those who refuse to leave. He admits he misses the Soviet times and fought in the early 1990s war that led to the Armenian administration controlling Nagorno-Karabakh.

This conflict, however, is “something else”.

“It was man-to-man combat back then, everything was on the ground and you always knew where the enemy was,” he recalls.

Today, he stresses, the enemy is not just Azerbaijan but also Turkey, “and Israel is joining hands”.

A majority of the images are taken by drones - both Turkish-made Bayraktar ones and Israel’s “kamikaze” Hagops. The use of both has not only been proved by footage, but consistently acknowledged by top Azerbaijani officials.

When presented with images of the alleged Hagop remnants in Stepanakert, Wim Zwijnenburg, a weapons expert and the coordinator of the European Forum on Armed Drones, concluded it was “likely” the aircraft was of Israeli origin.

The Harop can find targets based on radar or radio wave emissions before destroying a target by ramming into it.

According to Zwijnenburg, these type of “kamikaze” drones - also known as loitering munitions - have become popular with armed forces because they are cheap to produce, easy to use and can hit targets with high precision without exposing your own military personnel to enemy fire.

In addition, adds the expert, some of these drones create a disturbing sound when approaching their targets, which can be psychologically unsettling.

The Harop's use, however, is far from new. The Israeli drone was spotted in the 2016 clashes between Armenia and Azerbaijan.

Four years later, they have become a thorny issue, putting Armenian-Israeli relations in a very difficult position. Just a few days after the beginning of the offensive, Yerevan recalled its ambassador to Tel Aviv over arms sales to Azerbaijan.

Data gathered by the Stockholm International Peace Research Institute shows that Israel has been the top supplier of arms to Azerbaijan over the past five years, with some $825m sales in weapons between 2006 and 2019. It is Azerbaijan's second-largest supplier of weapons after Russia.

Azerbaijani officials deny they are targeting civilians, while claiming Armenians are building military sites next to schools and markets, and among other civilian infrastructures.

Some go even further by accusing the Armenians of destroying civilian structures themselves.

“We don't target civilians and we actually have footage that proves that the church in Shusha was bombed by Armenians for propaganda purposes,” Samir Mammadov at the Azerbaijani Community of Nagorno Karabakh political body told MEE over the phone.

Mammadov, himself displaced from Karabakh back in the 90s war, also wanted to highlight Armenian attacks against residential areas in Ganja, Azerbaijan's second city, as well as some villages located in the vicinity of Nagorno-Karabakh.

The Nagorno-Karabakh defence ministry has acknowledged over 1,000 Armenian military casualties since 27 September, but Baku has not disclosed similar information from its side.

When it comes to civilians among the dead, figures are also disputed: Armenians claim 46 casualties while Azerbaijan talks about 91 among their own. Russia has estimated a total death toll of around 5,000 people.

Senior officials from Armenia and Azerbaijan met in Geneva on 30 October and agreed to avoid targeting civilians in the conflict. Three previous ceasefires had failed, and the fourth one was no exception: the conflict still rages on.

MEE revealed on Sunday a fresh ceasefire was being negotiated via Turkey and Russia.

Over recent days, residents in Stepanakert have rushed to catch a last ride out to Armenia before the road was cut by fighting - this eventually happened on Wednesday.

“I'm worried about Shushi,” admitted Artak Beglaryan, the ombudsman of Nagorno-Karabakh, from an underground location in Stepanakert.

The 32-year-old, who lost his sight to a landmine at the age of six, talks of an “asymmetric war which is opening the door to a humanitarian catastrophe”.

“They're clearly targeting civilians by destroying schools, hospitals, churches… We know that many of these war crimes are committed by those Israeli drones,” said Beglaryan, as the sound of explosions outside punctuated the conversation.

On Sunday, the Armenian administration in Nagorno-Karabkah called for the immediate evacuation of civilians and journalists still remaining in Stepanakert. Fears of a final crackdown on the battered city loom large. 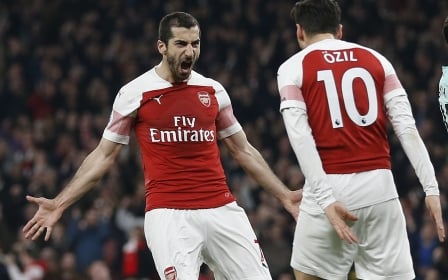