Plans for a grand mosque in Finnish capital have caused political uproar, and prompted calls to prevent Gulf influence in society 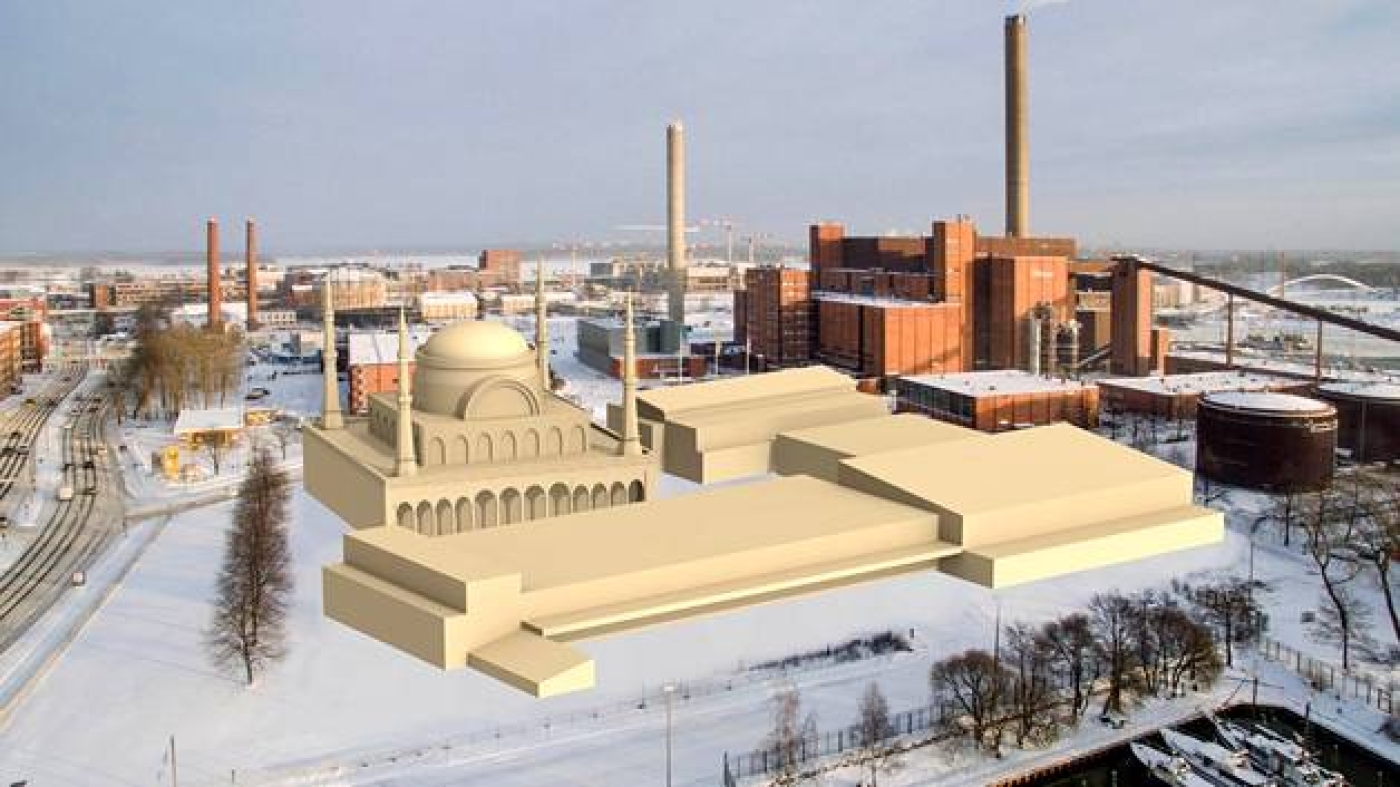 It is Friday in a suburb of Helsinki and Pia Jardi makes her way down a narrow staircase to sit on the worn carpet of a small, stuffy room.

Today she is one of the lucky ones. Others who cannot fit into this small "cellar mosque" will have to pray out in the snow.

As a Muslim she feels welcome here, but as a Finn she does not. The imam delivers his sermon in Somali, a language she cannot understand. She says her prayers, then leaves.

These scenes could be a thing of the past if Jardi, 51, has her way. She is leading a campaign to build Helsinki's first grand mosque.

The Oasis centre as it is known will turn a drab car park on a Helsinki industrial estate into a sprawling complex with space for 1,200 worshippers, a dialogue centre and landscaped gardens harking back to Moorish Spain.

Its four minarets will compete on the skyline with the smoke stacks of surrounding factories.

But news that the project will be financially backed by the oil-rich Gulf state of Bahrain has sparked a national debate on Muslim integration and the influence of so-called Wahhabi Islam on the country.

Prominent members of Finnish civil society - a senior ambassador, the bishop of Helsinki, politicians and authors - have all weighed in.

Jardi said that because the majority of Finland's 70,000-strong Muslim community are relatively poor second-generation immigrants, they need outside help.

"We don't have money. There are no businessmen who can pay, no government support," she said.

She said that the mosque will be able to unite all Finnish Muslims - a melting pot which includes Somalis, Arabs, Turks, Kurds, Albanians and ethnic Finn "reverts" to Islam like herself - by providing services such as a sports and community centre that are "designed with Muslims in mind but open to anybody".

Muttaqi Khan, who sits on the board of Young Muslims, an NGO that tries to empower young Muslim Finns, said about the mosque: "Overall it is a good project, but it's not perfect."

Khan, who spends his holidays in Whitechapel, east London, visiting his British-Bangladeshi family, compared the Oasis centre to the East London Mosque, the UK's largest: "We're skipping stages and going for a big mosque," he explained.

Overall it is a good project, but it's not perfect

Yet Khan said that the mosque will help young Finns to integrate better into Finnish society. "When I go to the UK and see the [East London] mosque I feel the connection" between the Muslim community and the rest of society. "There is a feeling of acceptance there."

In January, the Finnish government was forced to condemn anti-Muslim street patrols by neo-Nazi groups that had sprung up in towns across the country.

Meanwhile the country is grappling with an influx of refugees from the Middle East and authorities fear Islamic State group-inspired attacks - as was seen in neighbouring Sweden last month - could take place.

The rise of violent far-right activities might "increase the breeding ground for the violent extremism motivated by religion", said Tarja Mankkinen, an interior ministry official responsible for Finland's anti-radicalisation policy.

She said that while the ministry finds many "positive aspects" in the mosque project "the challenge is that the mosque is planned to be funded by Bahrain and possibly by other Gulf countries".

"The role of the actors who fund the mosque and its activities might consist a [security] risk if it decreases the feeling of belonging to the Finnish society among the Muslim population."

Though Bahrain funds a number of think tanks such as the London-based International International Institute for Strategic Studies, the Helsinki mosque is thought to be the first it has backed in Europe.

The kingdom's relationship with Finland's Muslims grew out of its strong showing at Islam Expo - a three-day event of exhibitions and talks on the theme of "Pluralistic Society: How can Islam contribute?" in 2013.

Bahrain's king, Hamad bin Isa al-Khalifa, took a personal interest in the mosque project and met Jardi and other board members of the Oasis foundation, a committee set up to build the mosque.

While their dream mosque enjoys support from senior politicians, there have been protests against the project, while the incoming mayor of Helsinki Jan Vapaavuori said in the run-up to his election: "I'm going to work against it being built."

Mankkinen, from the ministry of interior, and other observers have pointed out that Bahrain's human rights record is a cause for concern.

And human rights groups have suggested that Finnish arms companies may have contributed to this. According to Finnish NGO SaferGlobe, in January 2011, a month before Bahrain's crackdown on protesters who had taken to the streets as part of the Arab Spring began, the kingdom received 3.5 million euros' worth of small arms - including snipers and ammunition - from Finland.

Amnesty international described human rights violations in Bahrain as "chilling" and called on Finland to halt arms sales to Bahrain in 2011.

Instead, Rome-based Liimatainen is backing a call from the bishop of the Lutheran Church in Finland for parishes to lend non-religious buildings to Muslims for use as religious sites. She says that the Finnish state should reconsider the fact that only Christian churches have access to money coming from taxation.

The model could be the same used in Italy where each Italian taxpayer can assign a portion of their income for a religious community.

Liimatainen, who has written a number of well-regarded books about the Middle East, said because Bahrain is a close ally with Saudi Arabia in what she calls a "hegemonic battle" with Shia Iran, the mosque could bring "Sunni-Shia hate politics into Finland".

According to reports, Abbas Bahmanpour, imam for Helsinki's main Shia Twelver mosque - which has received money from religious endowments in Iran - has expressed "alarm" in the past at the prospect of Gulf countries that follow a "very hard-line Islam" funding the Oasis centre mosque.

But he declined to comment to MEE in the interests of preserving good relations with Helsinki's Sunni Muslim community which are in the majority.

Referring to a controversy surrounding a Saudi-funded mosque in Geneva, Liimatainen said that judging from the "experience in Europe about Saudi financing of mosques", it is "an illusion that this money is without conditions".

The official state religion of Bahrain - a country that has a majority Shia population - is "Islam", while in Saudi Arabia it is "Sunni Islam".

However the royal family are Sunni Muslims and the anti-regime protests, led by mostly Shia opposition groups and the bloody crackdown that followed have been seen to have a sectarian nature.

Despite this, Jardi points out that Finnish media and the political establishment have characterised the mosque as being under Wahhabi influence - a term sometimes used pejoratively to describe Saudi's somewhat strict and unique Islamic practices.

People that say the mosque is Wahhabi-inspired "don't have a clue about Islam", she said.

She denied that Bahrain would have influence over the running of the mosque and was adamant that there would be a Finnish imam who would be "someone who knows the context of the country and who can tackle issues that are taking place in Finland."

The 140,000 euros that Bahrain has pledged will only go as far as funding an architecture competition and buying literature - the community will have to fund the shortfall.

Lessons from Finland's past

Finnish retired ambassador Ilari Rantakari said that when it comes to Muslim integration, Finland ought to learn lessons from its own history, where over the space of two centuries, Muslim Tatar and Jewish soldiers from the Russian Empire, indigenous Sami peoples and Swedish-speaking peoples have all had to be included alongside ethnic Finns.

"What we have learnt throughout our history is that society can only be stable and prosper if every minority is included," he said. "When you are kept outside society, it only creates more aggression."

When you are kept outside society, it only creates aggression

Rantakari has served as an ambassador for Finland across parts of Africa and Asia with large Muslims populations and is heavily involved in the United Nations' Alliance of Civilisations, a platform for intercultural and interreligious dialogue, and is backing a dialogue centre that will be built as part of the Oasis centre project.

It will be a place for "all to come and listen to learn" and allow "people to communicate and strengthen their identity as Finnish citizens".

But without the mosque, the ambassador fears that existing "cellar mosques" will struggle to attract such interest.

"Many of these mosques are so hidden - [even] if there is a sign on the street, who will go from the street into this underground space?"