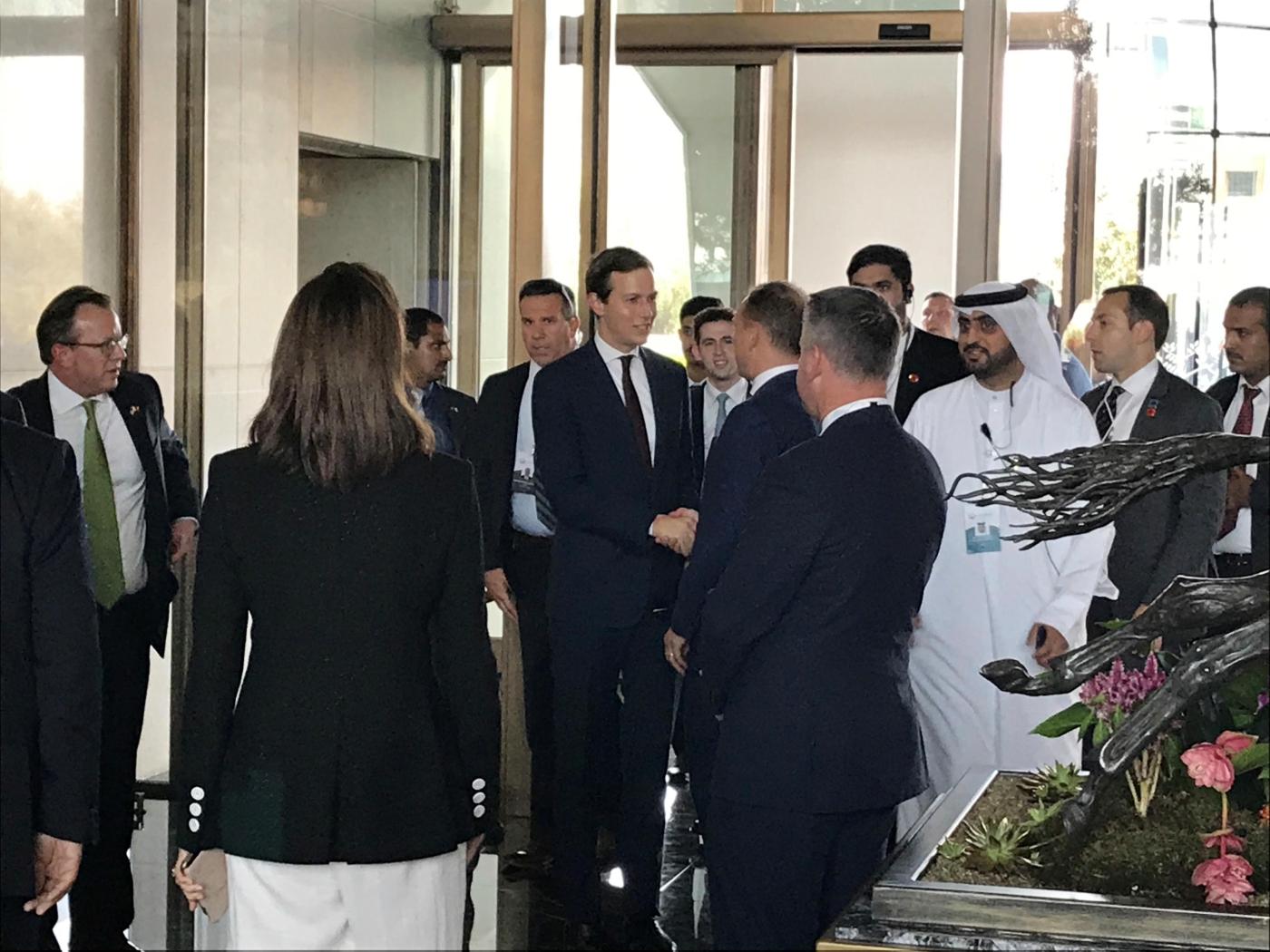 Kushner arriving at Manama's Four Seasons hotel, the venue for the US-hosted 'Peace to Prosperity' conference (Reuters)
By
MEE and agencies

The first stage of President Donald Trump's Middle East peace plan, billed as the "deal of the century", began on Tuesday at a conference in the Bahraini capital, Manama.

The White House is touting the event as a bid to begin drumming up $50bn in investment for the economic part of the plan - labelled by the US as "Peace to Prosperity".

But Palestinians have already derided the wider plan as an "economy first" approach that is doomed to fail.

The two-day international meeting, led by Trump’s son-in-law, Jared Kushner, has been promoted as the first part of Washington's long-delayed broader political blueprint to revive the moribund Israeli-Palestinian peace process, which will be unveiled at a later date.

Kushner said Trump’s administration has not "given up" on the Palestinians, whose leadership is boycotting the US conference.

"Agreeing on an economic pathway forward is a necessary pre-condition to resolving the previously unsolvable political issues," Kushner said as he opened the two-day event before a gala dinner.

Neither the Israeli or Palestinian governments will be attending the event.

A spokesman for Palestinian Authority President Mahmoud Abbas said on Tuesday that the Bahrain workshop was "stillborn", adding that there could be "no peace without the Arab Peace Initiative and the [UN] Security Council resolutions". Thousands of Palestinians protested on Monday and Tuesday in towns and cities in the occupied West Bank and besieged Gaza Strip against the meeting.

They carried posters saying "No to the ominous Bahrain workshop" and carried a black coffin that represents the "deal of the century" and the "decisions of the Arab League".

Around 3,000 people protested in Nablus in the northern West Bank, with others attending demonstrations in Ramallah and Hebron on Tuesday, the AFP news agency said.

Palestinian factions in the West Bank and Gaza Strip have strongly condemned the summit and urged Arab states not to send representatives to Manama.

Richard LeBaron, a former US diplomat in the Middle East, said that the Trump administration fully expected that the Palestinians would stay away.

But the event allows Kushner to portray Palestinian leaders as not caring about their own people as he keeps advancing Israeli interests, said LeBaron, now a senior fellow at the Atlantic Council think tank.

"The 'failure' of the Manama workshop will be success for the Trump strategy," he wrote in an analysis.

"It will permit Kushner and his colleagues to claim that they tried their best to address the situation and allow them to blame others for not cooperating."

There will be close scrutiny as to whether attendees such as Saudi Arabia and other wealthy Gulf Arab states show any interest in making actual donations to a US plan that has already elicited bitter criticism from Palestinians and many others in the Arab world.

Who is and who isn't attending the Bahrain Summit

The first stage of US President Donald Trump's Middle East peace plan, billed as the "deal of the century", began on Tuesday at a conference in the Bahraini capital, Manama.

The two-day international meeting, led by Trump’s son-in-law, Jared Kushner, will focus on the economic aspects of the deal which the US refers to as "Peace to Prosperity".

It has been promoted as the first part of Washington's long-delayed broader political blueprint to revive the moribund Israeli-Palestinian peace process, which will be unveiled at a later date.

The Palestinian leadership and some other countries are boycotting the conference, but several other states and organisations will be attending the summit in varying capacities.

Oman (Foreign Minister Yusuf bin Alawi has said that Oman will most likely participate)
Kuwait (On Monday, the emirate's national assembly called on the government to boycott the event)

Bahrain, a close American ally and home to the US Navy's Fifth Fleet, has been making preparations for weeks, the Reuters news agency reported.

Although the conference is supposed to focus on economics, Gulf Arab states hope their presence will also show their solidarity with the Trump administration over its hardline against Iran, a senior Gulf diplomat said on condition of anonymity.

Under the plan, donor nations and investors would contribute about $50bn over 10 years, with $28bn going to the Palestinian territories - the Israeli-occupied West Bank and the Gaza Strip - as well as $7.5bn to Jordan, $9bn to Egypt and $6n for Lebanon.

Among 179 proposed infrastructure and business projects is a $5bn transport corridor to connect the West Bank and Gaza.

'Opportunity of the century'

"I laugh when they attack this as the ‘deal of the century,’" Kushner told Reuters, referring to the lofty nickname that Trump’s peace plan has assumed over the past two years.

"This is going to be the ‘opportunity of the century’ if they have the courage to pursue it."

Kushner, a senior Trump adviser who like his father-in-law comes from the world of New York real estate, is presenting his plan in a pair of pamphlets filled with graphs and statistics that resemble an investment prospectus.

But pushing back against critics who accuse Kushner of trying to forge a strictly “economic peace”, he told Reuters last week: “A lot of past attempts have failed. Calm down... and keep an open mind.”

Even so, expectations for success are low.

The Trump team concedes that the economic plan will be implemented only if a political solution to one of the world’s most intractable conflicts is reached.

Any such solution would have to settle long-standing issues such as the status of Jerusalem, mutually agreed borders, satisfying Israel's security concerns and Palestinian demands for statehood, and the fate of Israel's illegal settlements and military presence in territory where Palestinians want to build that state.

Deal will not adhere to the Arab Peace Initiative

In an interview with Al Jazeera set to air on Tuesday, Kushner offered a rare glimpse into the possible political contours of the plan, saying a deal would not adhere to the Arab Peace Initiative, a Saudi-led plan that has been the Arab consensus on the necessary elements for a Palestinian deal since 2002.

"I think we all have to recognise that if there ever is a deal, it's not going to be along the lines of the Arab Peace Initiative," Kushner told Al Jazeera.

"It will be somewhere between the Arab Peace Initiative and between the Israeli position."

The Arab Peace Initiative offers Israel normal ties with the Arab world in exchange for a Palestinian state drawn along borders that predate Israel's capture of territory in a 1967 war and a fair solution for Palestinian refugees. Israel has rejected some of the initiative's main provisions.

Hanging over the entire initiative are persistent questions about whether the Trump team plans to abandon the "two-state solution", a long-standing principle of Middle East peacemaking that involves the creation of an independent Palestinian state.

But the Trump team has consistently refused to commit to it.

'Some' Palestinian businessmen to attend

Israeli Prime Minister Benjamin Netanyahu, a close Trump ally, has his own domestic problems, facing an election, and possible corruption charges after a long-running police investigation. He denies any wrongdoing.

"We'll hear the American proposition, hear it fairly and with openness," Netanyahu said on Sunday. Although no Israeli government ministers will attend, an Israeli business delegation is expected.

Palestinian leaders have boycotted the workshop, and are refusing to engage with the White House - accusing it of pro-Israel bias after a series of recent Trump decisions.

Kushner told Reuters that "some" Palestinian businessmen would be present.

Abbas, whose Palestinian Authority exercises limited self-rule in the Israeli-occupied West Bank, was scathing about its prospects of success.

Hamas, which governs Gaza, has found itself in rare agreement with its arch-rival Abbas.

'Iran is higher on the chain of interest right now'

Kushner insists, however, that the economic plan is intended to help draw Palestinians back to the negotiating table by showcasing the benefits a peace deal could bring.

Kushner said that even without the Israeli and Palestinian governments represented, the presence of Israeli business executives and journalists with their Arab counterparts would be significant at a time of rising tensions with Iran.

"People realise that the real threat to that region is Iran and their aggression, and Israel and a lot of the other Arab states have a lot more in common today than they did before," he said.

David Makovsky, a Washington-based Middle East expert, agreed that although the principal focus of the event was the Israeli-Palestinian conflict, "Iran is higher on the chain of interest right now."

However, Makovsky, whom the White House has invited as an observer, said of the Trump-Kushner plan: "No one believes you can solve this thing economically without addressing the political issues."