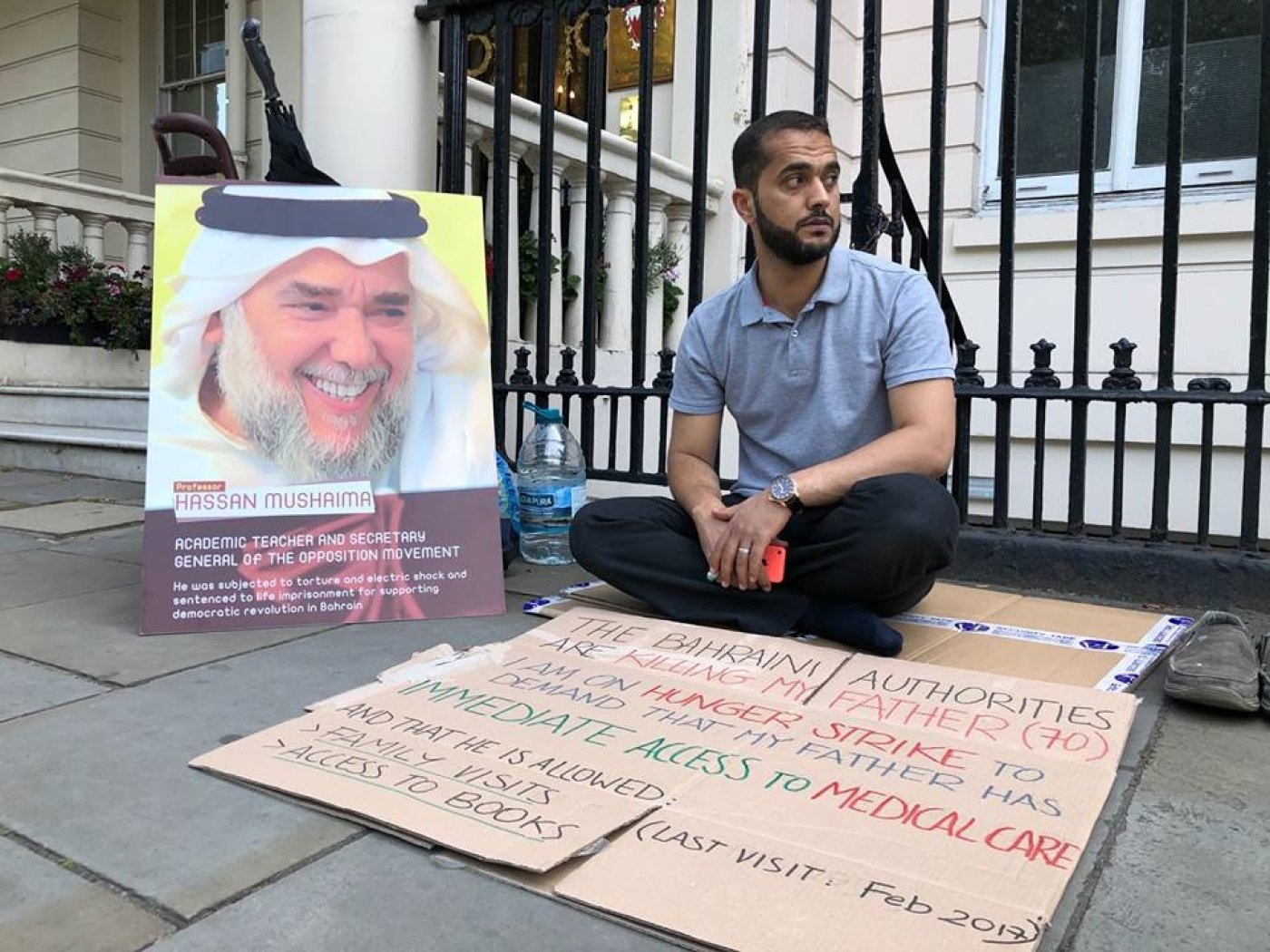 LONDON - The son of an imprisoned Bahraini activist has been on hunger strike for eight days, in protest of his father being denied urgent medical care in a Bahrain jail.

Ali Mushaima is the son of Hassan Mushaima, a 70-year-old political leader who was arrested as part of a violent crackdown on protests in the Gulf Arab country in 2011.

The son, 35, started his hunger strike outside the Bahraini embassy in London on 1 August, and has vowed to continue protesting until his father’s rights are restored.

“Going on hunger strike was the last thing I could do stop my father from dying in prison,” Mushaima told Middle East Eye from outside the Bahraini embassy in London.

“Before going on hunger strike, I tried everything - from writing to MPs to speaking with human rights organisations - to raise my father’s case.

“They are killing my father slowly by denying him basic medical care.”

Mushaima said that his father was diagnosed with cancer several years ago and denied treatment, family visitation rights and books.

“They are killing my father slowly. He is 70 years old and by denying medicine and books they are trying to break him down bit by bit,” said Mushaima.

He added that his father also suffered from other medical issues such as diabetes and high blood pressure.

Mushaima said he had lost five kilograms since going on hunger strike.

Relying upon activists and friends who have come out to support him, the activist has slept outside the Bahraini embassy on a thin mattress and a sleeping bag.

Images posted on social media showed him praying in the rain on Tuesday evening and sitting outside the embassy with placards and a picture of his father.

“This was not an easy decision to make. I left my wife and daughter to be out here. But if this is the only way to save my father, then so be it,” said Mushaima.

“I will continue being on hunger strike until my father is given the rights that he deserves.”

Hassan Mushaima was arrested in 2011 and sentenced to life in prison for leading anti-government protests.

Amnesty International on Monday accused Bahraini authorities of failing to provide proper medical care for him and three other elderly jailed activists.

In a statement, the human rights group condemned Hassan Mushaima’s imprisonment and said the four activists were denied treatment because they “refused to wear shackles”.

Before coming to the UK, Ali Mushaima was a bus driver and activist in Bahrain.

He had his Bahraini nationality revoked after being sentenced to 45 years in prison, and came to Britain as a political refugee in 2006 - where he has remained active in campaigning for rights in his country ever since.

The Bahraini embassy in London told MEE that Manama was not denying medical care to Hassan Mushaima, claiming that the 70-year-old activist was refusing to attend appointments.

“Mr Mushaima has refused to attend his specialist's appointments at outside hospitals, including his scheduled PET scans scheduled last year (oncologists advised a scan every six months) because Mr Mushaima refuses to wear the prison uniform,” a spokesman said in a statement.

“Unlike many other jurisdictions, inmates in Bahrain wear their own clothes, not uniforms, while in prison. However, when inmates leave the prison facility, whether to attend a trial or go to hospital or visitation, they are required to wear a uniform.”

In response, Ali Mushaima told MEE that his father was forced to walk in chains and shackles to receive treatment.

“Rather than giving him his medication inside his cell, the Bahrainis are making him walk to a counter for his medicine in this uniform," Mushaima said. “He is an old man, and they are trying to use any excuse to humiliate him and break him down.

“He is 70 years old, and they are killing him slowly by denying him medication.”

Dozens of activists have been imprisoned during and since a major crackdown to quell protests against the ruling Bahraini royal family in 2011.

Following the uprising in February 2011, the Bahraini government declared martial law. While that officially ended in June of the same year, opposition activists and politicians have since been targeted. Demonstrators have frequently clashed with security forces, who have been targeted by bomb attacks.

Bahrain has accused the opposition of undermining security and blamed the bombings on Iran and Lebanese group Hezbollah. Iran and Hezbollah deny any involvement in Bahrain's unrest.

Britain, meanwhile, has strengthened its ties with Bahrain despite Manama's ongoing crackdown. Earlier this year, Britain opened a permanent military base inside the island country.

Since 2011, the UK has licensed over $103m worth of arms to Bahrain, including machine guns, sniper rifles, gun mounts, assault rifles, and anti-armour ammunition.

"We have total support and solidarity for Ali's demands. The Bahraini regime has an appalling human rights record, which it has been able to cover up on the world stage with the support of complicit governments like the UK," Andrew Smith of Campaign Against Arms Trade told MEE.

"If [UK Prime Minister] Theresa May and her colleagues want what is best for Ali and his father, then they must end their arms sales to the regime and put pressure on it to free Hassan and other political prisoners."

A spokesperson for Britain's Foreign and Commonwealth Office told Reuters on Monday: “We believe that only by working with Bahrain can we hope to bring about the changes we would like to see.”