In a little more than a decade, the number of Bahraini farm workers has fallen to just 650 from 15,000 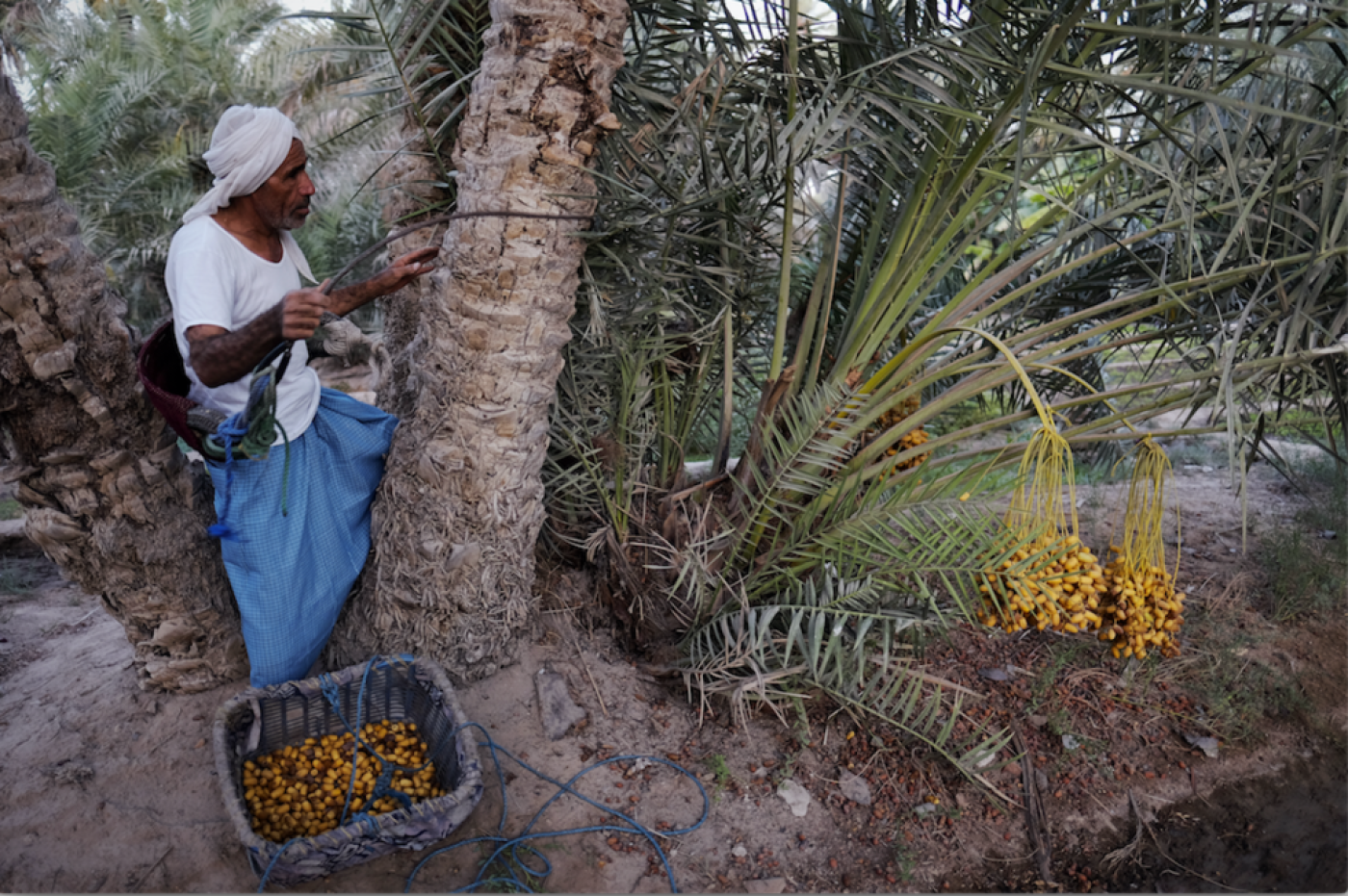 A Bahraini farmer harvests dates at his farm in the village of Bori, south of the capital Manama (AFP)
By
Islam Alzeny

MANAMA – Even when temperatures reach 45C, as they often do in the summer, Hussein Sadiq never leaves his farm in the village of al-Badie in the western part of Bahrain.

Sadiq, now in his early 50s, grows mainly squash, cucumbers, onions, tomatoes and papayas and has been working the same bit of land for more than 30 years, just as his father did before him.

The stocky farmer says he feels a special connection to the land and has long grown accustomed to the gruelling heat and conditions. A combination of government cuts and increasingly tempestuous weather patterns, however, mean that it has become all but impossible for him to keep going.

For the past 10 years, Sadiq said, his profits have been eroded year by year. This has forced him to cut back on key equipment such as nets that guard against the sun, further hurting yield and profits.

To compensate, he has taken out large loans totalling 100,000 Bahraini dinars ($265,000) to buy the land and stop rent payments he could not afford, but this has only landed him in more financial trouble.

Now, he said, he is seriously thinking about giving up, selling his land to developers and moving to the city to join a growing number of dispossessed and unemployed farmers.

“This is the profession I inherited from my father,” Sadiq told Middle East Eye. “I know nothing but how to work the land.”

He is not the only farmer who says that the industry is no longer viable. Official figures, released by the agriculture ministry, say that the number of Bahrainis working the fields has fallen from 15,000 in 2002 to just 650 today. Those in the industry though say the true present number is even lower - about 100.

The tiny Gulf country is today seen as little more than high-rise buildings and sand, but this was not always so. For centuries, Bahrain was known as “the country of a million palm trees,” with local farmers specialising in date palm cultivation and producing enough dates to export throughout the Middle East.

In the middle of the last century, however, this began to change. Prompted by shifting diets and demands, farmers abandoned palms for thirstier crops such as tomatoes and cucumbers, and also rice and wheat as well as dairy farms.

As oil came to dominate an ever-larger part of the economy, and investment flowed in to Manama, farmers also found themselves under growing threat. It wasn’t long before the smaller producers near the capital sold their land. But oil profits also allowed the government to dish out generous subsidies to those cultivating the fields in western Bahrain, which has always been seen as the island’s agricultural heartland, and for decades, they were lavished by generous rent, water, seed and tools subsidies, which allowed them to fight on.

By the start of this century, however, Bahrain’s oil supply was starting to run dry and reserves were getting harder to extract. When the global financial crisis hit in 2007 and 2008, the ration of Bahrain’s national debt to GDP began to spike, despite a rise in global oil prices.

In 2011, the outbreak of anti-government protests inspired by the Arab Spring in 2011 put further pressure on the economy, with many foreign firms and investors pulling out due to the violence.

The following year, Tamkeen, a quasi-government agency that traditionally provided loans of about $27,000 to every farmer, suspended its activities, citing countless instances of abuse by non-farmers who tried to cheat the system in order to get cheap credit.

The collapse of oil prices in the past two years was the final straw, and the government has been pushed to cull many key subsides.

“We used to obtain all the essential equipment from the government for no cost, but since mid-2014 the resources have become largely insufficient, and we have had to buy equipment from abroad at exponentially higher prices,” Sadiq said.

Dozens of Bahraini farmers lost their jobs last year as result, a trend that has worsened in 2016. A number of prominent farms have reportedly been levelled to create space for residential compounds, despite the fact viable land was available nearby.

The government says that farmers are selling up due to lucrative offers from developers, but many do not own the land and say they have been kicked out by wealthy landlords lured in by the promise of higher commercial rents.

Sayed Jaafar was leasing a farm for more than 12 years before his landlord told him to get out after a developer came knocking. Just like that, Jaafar said, he lost his only source of income, leaving him unable to feed his family.

“Since I was thrown off the land, I have not been able to afford to support my family,” he told MEE. “I do not want support or money, I just want my land back.”

The government has tried to help famers and in 2010 promised to set up agricultural reserves that would protect land from developers. They also said they would work to boost irrigation and try to introduce vertical farming, which is deemed more eco-friendly and effective.

Under the scheme, poorer farmers were allowed to rent so-called endowment lands from the government on the cheap, but many complained that the land was poor quality and that it was hard to grow crops there.

Kadhim Mahdi told MEE that farmers simply could not deal with the falling living standards they were being subjected to.

“Lands are not officially registered, and they can be deserted and empty, but when the farmers properly exploit and cultivate them, the government suddenly demands to increase the rents, which propels farmers to search for other lands,” said Mehdi.

Sadiq, who is on the verge of selling his land, also complained that the government support scheme was hard to access and that the paperwork was too difficult to fill out for many farmers.

The government has said that it is only being careful to avoid giving support to non-farmers who are trying to cheat the system and apply for agricultural help, but the stalemate has still left many feeling abandoned by the state.

Without serious support, conditions for many are only expected to deteriorate. Groundwater, long used to water crops, is running out, while farmland salinisation, which devastates crop production, is spreading.

As an archipelago, scientists believe Bahrain is particularly susceptible to global warming set to cause rising sea levels. In recent years, the largely arid Gulf kingdom has been hit by drought and deadly floods, which are expected to grow more frequent as the effects of global warming bite.

Mohammed Anwar, a 66-year-old farmer, said that water scarcity is now his biggest problem. Since government water subsidies were cut he cannot exploit more than a quarter of his land near the northern Bahraini village of Busaiteen. Even the crops he does grow tend to die or underperform because there is not enough water to feed them.

“I’ve tried very hard, and so have many other farmers, but despite our efforts we cannot rescue the profession from extinction,” he said.

“I just cannot continue with a profession that does not bring in enough income to support my wife and six kids.”