In a blistering resignation letter, the columnist with history of anti-Palestinian activism says she was bullied by 'progressive' colleagues at the New York Times 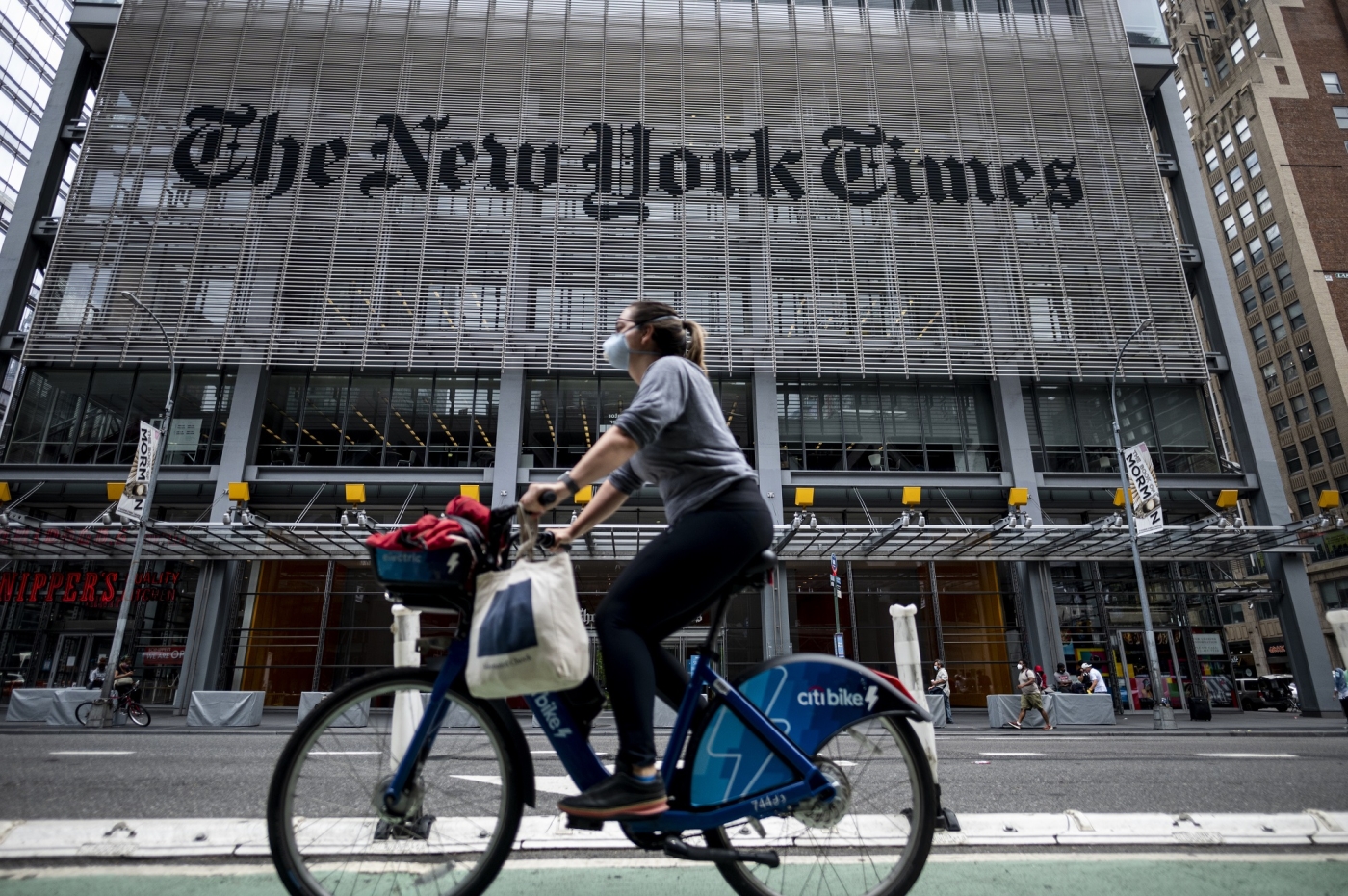 The resignation of pro-Israel columnist Bari Weiss from the New York Times has fuelled an already raging debate in the United States about "cancel culture" and the changing media landscape where social media has given readers a platform to air their grievances against public figures, including journalists.

Early on Tuesday, Weiss announced that she was quitting the Times citing a "hostile work environment" and lack of tolerance towards "centrist" voices such as herself by what she portrayed as a "progressive" orthodoxy that now controls whom and what gets published at the newspaper.

"Op-eds that would have easily been published just two years ago would now get an editor or a writer in serious trouble, if not fired," Weiss wrote in her resignation letter.

'There is no issue of legitimate inquiry which is more likely to get you 'cancelled' than support for Palestinian rights. That Bari Weiss, an intellectual architect of that regime of censorship, has the audacity to 'self-expel' and cry cancellation is outrageously hypocritical'

Palestinian rights activists were quick to decry what they described as Weiss's hypocrisy. Dating back to her days as an undergraduate student at Columbia University, the columnist has frequently been accused of working to silence Palestinians and smear Israel's critics.

At Columbia in New York in the mid-2000s, Weiss was part of a campaign accusing several Arab-American professors critical of Israel, including Joseph Massad, of racism against Jewish students and demanded their termination.

The campaign, which included a movie titled Columbia Unbecoming, prompted then-Congressman Anthony Weiner - whose political career later ended in a sexting scandal involving a teenager - to call on Columbia to fire Massad. The university also opened a probe into the allegations.

At the time the New York Civil Liberties Union called on Columbia to resist the pressure to terminate the professors in order to protect "ideological diversity, pluralism and tolerance in the campus community" - the same values that Weiss says are under attack by the left.

While the columnist's supporters may be inclined to warn that one's career should not be defined by her student activism, Weiss did not cease her attacks on Israel's critics as a professional columnist.

She has also attacked Palestinian-American activist Linda Sarsour accusing her of having a "history of disturbing views" and "alarming ideas" citing anti-Zionist tweets.

In her 2019 book, How to Fight Anti-Semitism, Weiss compares Sarsour to white supremacist Republican Steve King, bemoaning that Sarsour's critics would face a backlash for condemning the activist's "antisemitic outbursts" without citing any examples of such outbursts.

The premise of the entire book is that antisemitism is on the rise on the left, disguising itself in universal human rights values that reject Zionism, making it "more insidious and perhaps more existentially dangerous" than far-right antisemitism.

In the book, she also accuses Jeremy Corbyn of turning the Labour Party in the United Kingdom into a "hub of Jew hatred".

"There is no issue of legitimate inquiry which is more likely to get you 'cancelled' than support for Palestinian rights," progressive commentator Krystal Ball wrote on Twitter on Tuesday.

"That Bari Weiss, an intellectual architect of that regime of censorship, has the audacity to 'self-expel' and cry cancellation is outrageously hypocritical."

Palestinian-American activist Ahmad Abuznaid also dismissed the notion that Weiss was a "victim of silencing", calling on the Times to give her column space to a Palestinian rights advocate.

"Bari is just frustrated that people are no longer accepting her narrative. Not only are people not accepting of this one-sided narrative anymore, but they're calling it for what it is," Abuznaid told MEE.

Weiss says she was bullied

In her resignation letter, Weiss accused her now-former co-workers who disagree with her views of bullying her, saying that she has been called "a Nazi and a racist" and her colleagues have complained about her frequent writing on Jewish issues.

"There are terms for all of this: unlawful discrimination, hostile work environment, and constructive discharge. I'm no legal expert. But I know that this is wrong," Weiss wrote.

The author's critics dismissed her complaints, noting that the newspaper remains a bastion for centrism and home to several right-leaning columnists and editors.

The Times has declined to comment on specific allegations in its former columnist's letter. But NYT's head of communications, Eileen Murphy, told MEE in a statement that the newspaper is "committed to fostering an environment of honest, searching and empathetic dialogue between colleagues, one where mutual respect is required of all."

The columnist first spoke out about disagreements inside the Times' newsroom after the publication of an op-ed by Senator Tom Cotton calling for sending the US army to quell the unrest after protesters took to the streets across the country following the killing of George Floyd.

The column sparked outrage on the left, with critics arguing that it compromised the safety of Black people, including staff members of the Times.

The paper eventually added an editor's note to the online piece, noting that the op-ed fell short of the NYT's editorial standards and should have been rejected or drastically edited.

The controversy also led to the resignation of Times opinion editor James Bennet.

At the time, Weiss took to Twitter to criticise her "woke" colleagues who condemned Cotton's column, noting that there was a "civil war" inside the newspaper between younger journalists and the publication's old guard.

"The New Guard has a different worldview... They call it 'safetyism,' in which the right of people to feel emotionally and psychologically safe trumps what were previously considered core liberal values, like free speech," she wrote.

On Monday, Weiss received support from several journalists and commentators with Caitlin Flanagan, a writer for the Atlantic calling the Times' treatment of her "unconscionable".

"It's not civil, it's not in the reader's interest, and the well-documented culture of extreme harassment will, I hope, now come to light. This is the biggest media story in years," Flanagan wrote on Twitter.

Donald Trump Jr also expressed support for Weiss, saying that her resignation "exposes the Times' rampant attacks on anyone who breaks from the far-left narrative".

Weiss's resignation comes at a time of an ongoing debate around "cancel culture" and the limits of free speech in the United States especially around issues relating to identity amid renewed protests for racial justice.

The columnist was one of dozens of journalists, academics and authors who signed a letter published in Harper's Magazine earlier this month that denounced what it called the "swift and severe retribution in response to perceived transgressions of speech and thought".

"While we have come to expect this on the radical right, censoriousness is also spreading more widely in our culture: an intolerance of opposing views, a vogue for public shaming and ostracism, and the tendency to dissolve complex policy issues in a blinding moral certainty," the letter reads.

Weiss's name on the letter ignited accusations of hypocrisy. The columnist's attempt to get people in their trouble with their employers do not stop with Palestinian rights advocates.

For example, in 2018, she tweeted at publications that run stories by freelance science journalist Erin Biba complaining that Biba had used a four-letter curse word while criticising an essay by Katie Roiphe.

"What kind of social media etiquette do @BBCScienceNews, @Newsweek, @sciam expect from their freelancers?" Weiss wrote in a now-deleted tweet. While the Harper's letter was endorsed by people from across the ideological spectrum - from leftist intellectual Noam Chomsky to Weiss - it caused uproar from liberal activists who accused the authors of aiming to protect narratives created and perpetuated by racist elites.

Palestinian-American author Nabeel Abraham said Weiss's case appears to be an issue that is going on within the New York Times, not an infringement on her free speech. But he warned that the intolerance outlined in the letter is real.

Abraham cited the recent case of a University of California Los Angeles professor who was placed under investigation for reading out excerpts from a Martin Luther King letter that included the n-word.

He said pro-Israel groups have tried to silence Palestinian voices by threatening their job security.

"What I'm trying to say to the woke culture: You're doing what the Zionists did, and still do to Palestinians," Abraham told MEE.

He defended the Harper's letter, saying that while the criticism that the signatories are powerful and may have their own platforms may be valid, the central point on preserving free speech and pushing back against efforts to take people's livelihoods over perceived mistakes still stands.

Abraham added that tolerance of dissenting opinions is the true test for freedom of expression.

"Everybody supports everyone that they agree with. That's a no-brainer. What the problem is: you have to allow people you disagree with to also speak."