Beheadings, crucifixions and food shortages: Life under IS in Sirte The Islamic State (IS) group has carried out dozens of executions - beheading and shooting captives - in the Libyan coastal city of Sirte since taking control last February, Human Rights Watch said on Wednesday.

The militants have executed political opponents, rival fighters as well as scores of alleged spies, sorceresses and infidels, the "We Feel We Are Cursed: Life under ISIS in Sirte," Libya report found.

Sirte residents, interviewed by HRW, said that their city was often lined with corpses in orange jumpsuits that were left hanging from buildings in what IS calls “crucifixions”.

The militants have also severely curtailed access to food, medicine and fuel and have seized properties of people who have fled while also appropriating cash from residents.

“As if beheading and shooting perceived enemies isn’t enough, ISIS is causing terrible suffering in Sirte even for Muslims who follow its rules,” Letta Tayler, senior terrorism and counterterrorism researcher said using a different acronym for IS. “While the world’s attention is focused on atrocities in Syria and Iraq, ISIS is also getting away with murder in Libya.”

HRW was able to document 49 executions in Sirte, but says dozens of other opponents have also been forcibly disappeared and are presumed dead. It says the unlawful executions could amount to crimes against humanity.

The Islamic State group controls a 200-kilometre stretch of coastline and has been able to use the political vacuum in the country - which has long been divided between two rival parliaments, one in the east and one in the capital Tripoli – to gain traction.

However, there is some limited progress against the militants in recent days with forces loyal to Libya’s new unity government, the Government of National Accord, recapturing a strategic crossroads near Misrata from the Islamic State group on Tuesday.

The unity government was agreed in December last year and entered Tripoli in March. It has thus far failed to fully unify warring Libyan factions behind it, but on Monday, the United States, Italy and Libya's allies and neighbours said they would look to reverse a UN arms embargo to allow the GNA to step up its efforts against IS.

But the anti-IS drive could be too little too late for many Libyans.

“Life in Sirte is unbearable. Everyone is living in fear,” a 30-year-old Sirte resident told HRW in Misrata where she was able to travel for medical treatment.

“They are killing innocent people. There are no groceries, the hospital has no doctors or nurses, there is no medicine. …There are spies on every street. Most people have left but we are trapped. We don’t have enough money to leave.”

The town, which has a population of almost 80,000 in 2013, is best known for being the birthplace of former leader Muammar Gaddafi, who was overthrown by a bloody NATO-backed revolution in 2011.

The HRW report also calls on international parties to do more to bring human rights violators to justice.

“Instead of issuing empty threats, international players should keep their promises to identify and punish those responsible for serious crimes in Libya,” Tayler said. “Failure to act will only lead to more civilians falling victim to horrific crimes by groups including ISIS.” 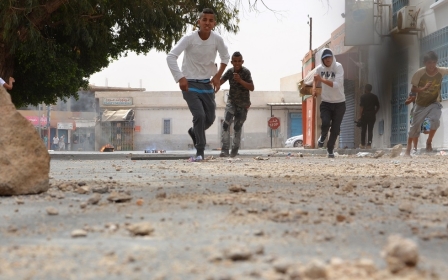