US troops spotted near Libyan frontline with Islamic State 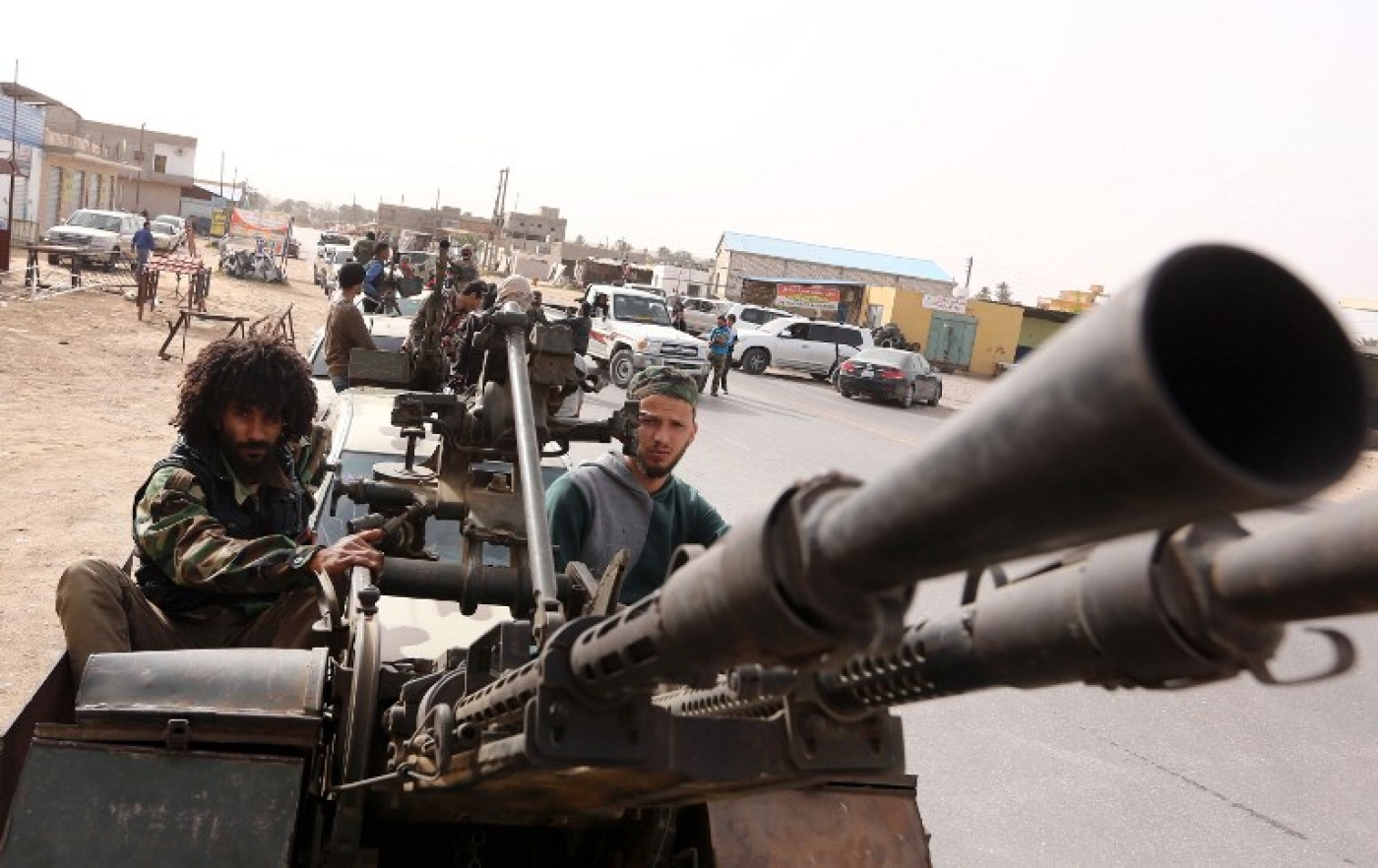 US military personnel are carrying out patrols and observations in Misrata, according to Libyan soldiers on the ground, amid growing reports of Western special forces engaged in the battle to remove Islamic State from the central city of Sirte.

“There are some US troops on the ground here, near the frontline,” one Misratan soldier, Ibrahim, told MEE. “Everyone here has seen them, but they are not fighting, they are just observing and doing patrols.”

He said there were at least six or seven personnel, who he described as well-armed and well-equipped, with three Japanese vehicles that were noticeably superior to the usual Toyota Hilux trucks favoured by the Libyan armed forces. The US personnel were in occasional communication with one or two very senior Misratan commanders, Ibrahim added.

Mohamed al-Ghossri, the spokesman for the Misrata military operations room, said he was unable to confirm or deny any US military presence, because he had not personally seen them.

He did, however, plead for the international community to support Libya’s fight against IS, which now controls over 300km of central coastline, and numerous towns and villages.

“Until now, we have had only moral support from the international community, but we need logistical support,” he said. “We particularly need night vision equipment because we are fighting a very dangerous and unpredictable enemy, who mobilise mainly at night.”

He said the weapons Misratan troops were using - mainly from former Libyan leader Muammar Gaddafi’s stockpiles, and often dating back to the 1980s - were inadequate for fighting IS, which appears to have extensive supplies of high-tech weaponry and ammunition.

“We want technical support from the international community so we can defend the Mediterranean basin, as well as our borders against further infiltration of IS fighters,” he explained.

“We are expecting some concrete help from the UK, but we need support from all the international community, especially NATO, because we are fighting against the main enemy of the whole world,” Ghossri said.

“The EU don’t seem to understand what’s happening here. They talk a lot about the IS attacks in Europe, but every single Misrata checkpoint has been attacked by IS, some of them more than once. The IS presence in Libya is a very dangerous and urgent matter for the whole world.”

Middle East Eye has reached out to the US Department of Defense for comment.

The revelation about the involvement of US troops in the fight against IS came as representatives of world powers gathered in Vienna to discuss international support for Libya’s new UN-backed Government of National Accord (GNA) and amid mounting reports of covert operations by Western special forces inside Libya.

In March, Middle East Eye revealed that British and Jordanian special forces were working together in covert operations against IS, while in February Reuters reported that elite French troops were advising Libyan troops in the east about how to take on IS.

Last week, the Washington Post quoted unnamed American officials who confirmed two teams of under 25 troops had been deployed to the cities of Misrata and Benghazi to “identify potential ­allies among local armed factions and gather intelligence on threats”.

The reported deployment coincided with Misratan forces launching a strong counter-offensive against IS, after losing their easternmost position at AbuGrain, 100km from Misrata, which IS attacked with a suicide bomb and some 100 vehicles. The surprise attack also saw Misrata lose control of its main route and supply line to southern Libya, where it has had forces stationed for several years.

“Our troops were forced back to Saddadah [80 km from Misrata], but they have now reclaimed the AbuGrain checkpoint,” Ghossri said. “We opened up two frontlines, from the east and the south of AbuGrain and were able to lay siege to the enemy, so that area is now back under our control.”

Despite Misrata’s airpower being limited to small aircraft designed to train pilots, he said a sustained campaign of aerial bombardment and heavy artillery fire had paved the way for a successful ground offensive.

Ghossri said the advanced frontline was now beyond the AbuGrain checkpoint, but said bomb disposal teams were now trying to deal with the mines and IEDs IS had planted across the area, after one soldier was killed and several injured when they detonated a mine. The booby traps included deep-covered pits which were filled with explosives near the AbuGrain checkpoint.

Ghossri said that fighting in the last week had left at least 12 dead and some 40 people injured, 13 of whom were transferred to Italy on Friday for medical treatment. IS losses had been substantially greater, he claimed, although he was not able to give exact figures.

“When our fighters advanced, they found that the bodies of the enemy had been burnt, sometimes in piles under vehicles, so we can’t estimate how many were killed, but they had a lot of losses.”

The Misrata military operations room is now working under the GNA, although Libya’s two other rival governments - based in the east and west respectively - both continue to operate. Misrata has a mandate from the GNA to advance towards Sirte’s district borders, but not to attempt to enter the town itself.

In a separate operation, Libyan armed forces led by General Khalifa Haftar and working under the government in the east announced the start of an operation to liberate Sirte from IS earlier this month.

Named "Gardabiya 2," after a Libyan victory over Italian forces that took place in the same area in 1915, the operation is in the preliminary stages and troops have amassed at positions in Libya’s central Saharan Desert, from where they plan to launch their offensive.

Armed forces loyal to these two rival governments have been engaged in civil conflict for over two years. Now they are both starting to fight against IS, but are moving towards Sirte from opposite directions and with fiercely divided loyalties, there are concerns amongst local people that they will end up fighting one another rather than IS.

“Now we have three governments, it’s all about military power as well as political power because whoever has the power on the ground, also holds the political power,” said Mohamed, a Sirte businessman.

“My biggest concern is that the armies from the east and west will end up fighting each other, which would only be good news for IS, which will continue to get stronger.”

Troops from eastern Libya have already clashed in the south with a rogue militia from western Libya, the exact origins and allegiances of which remain unclear.

Ghossri said that there were no communications between Haftar’s troops and the Misrata military operations room, but insisted that any soldiers would be welcome to join its fight, as long as they recognised the GNA, which the powers in the east have yet to do.

“We are all Libyans, we have the same nationality, the same state, the same country and now we have a common enemy so we should fight together,” he explained.

“We are facing a battle for Libya, not just a battle for Misrata as before, so any troops under the new government would be welcomed by us.”