Beirut explosion: Who were the victims of the catastrophic blast?

A week on from the disaster, Middle East Eye profiles some of those confirmed lost 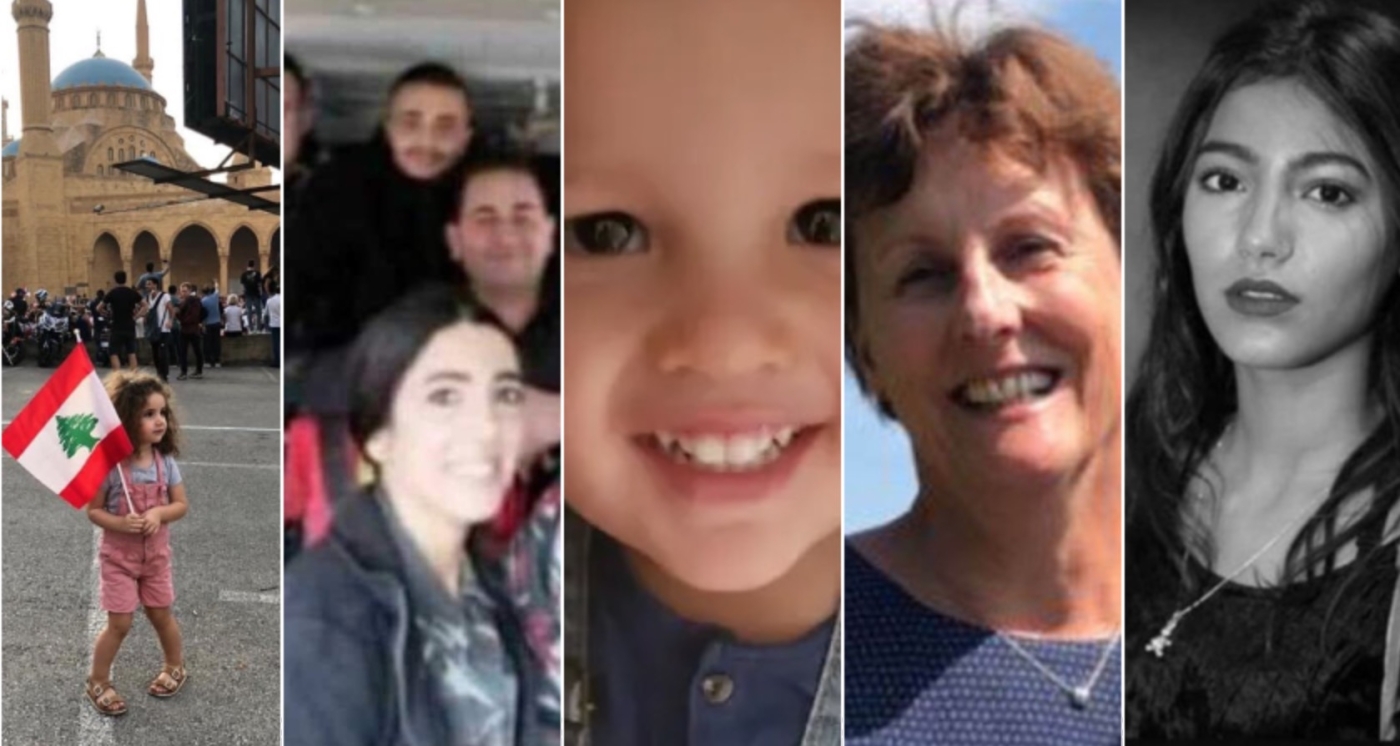 A week on from the devastating explosion that tore through Beirut, the names, faces and stories of those killed and missing in the blast have begun emerging. At least 160 people were killed in Tuesday's explosion, with thousands more injured.

Some of the first victims of the blast were identified as a team of firefighters who in vain attempted to douse the fire in Beirut's port before it ignited the 2,700 tonnes of ammonium nitrate left in warehouse 12.

Tributes have been pouring in for the group of 10 firefighters who took a final group photo before heading to the port on a mission they likely thought would be straightforward. The fire brigade was made up of nine male firefighters and a female paramedic.

The firefighters are all presumed dead but only one of them has been confirmed by Lebanon’s health ministry: Sahar Fares, the 25-year-old paramedic. Her colleagues, all presumed dead, were: Najeeb Hati; Ralph Malahi; Charbel Karam; Joe Noon; Charbel  Hati; Elie Khazmi; Rami Kaky; Mithaal Hawa; and Joe Busaab.

Fares was buried in an emotional funeral in Beirut. Her fiance, Gilbert Karaan, wrote a moving tribute on Instagram, expressing his sorrow over her loss and lamenting that their wedding next year will not take place.

“Your loss has broken my back, my soul. My heart has been burnt. Life has no meaning without you,” he wrote.

Tuesday's blast, which was felt more than 250km away on the island of Cyprus, was recorded by the sensors of the American Institute of Geophysics as having the power of a magnitude 3.3 earthquake.

According to authorities, it was triggered by a fire in a port warehouse where a huge shipment of hazardous ammonium nitrate, a chemical that can be used as a fertiliser or as an explosive, had languished for years.

The health ministry has published a list of 152 people confirmed as dead as a result of the Beirut explosion on Friday. However, Beirut's governor, Marwan Abboud, said yesterday that the death toll could now exceed 200 people.

According to reports, a two-year-old Australian, Isaac Oehlers, was one of the youngest victims of the explosion.

“We are heartbroken by the sudden tragic loss of our beautiful boy following the disaster in Beirut... we would like to express our condolences to everyone in Lebanon who is suffering from this devastating tragedy,” his family said in a statement.

A four-year-old girl, identified as Alexandra Najjar, succumbed to her injuries on Friday.

'Alexandra is not a martyr, she is a victim... you killed us in our homes where I thought I could protect my family and be safe... I want to send a message of unity to Lebanese people, so we can achieve change'

- Paul Najar, whose daughter Alexandra was killed in blast

In an interview with local media, her father Paul Najjar said they were in their home in the Gemmayzeh area when Alexandra was sent flying because of the force of the explosion and hit her head.

In the interview, he blamed the government for the death of his daughter and for the wreckage that has left thousands homeless.

“To all those who are responsible, from 30 years ago until now, you are all criminals. You are responsible for what happened and I hope that what you did to the country and all those affected keeps you up at night from now until your death,” he said.

“Alexandra is not a martyr, she is a victim... you killed us in our homes where I thought I could protect my family and be safe... I want to send a message of unity to Lebanese people, so we can achieve change."

Online, hundreds of people have been using the hashtag #AlexandraNajjar to pay their tributes to her.

Rawan Misto, 20, was another of those confirmed dead by the health ministry. According to tributes which have poured in on social media, Misto was working as a waitress in a restaurant close to the port when the explosion hit.

One Twitter user, who says they knew Rawan, expressed their devastation at her loss.

I knew Rawan. She was a waitress at Cyrano, one of the nicest pubs in Mar Michael. A friend tells me her parents had trouble burryinng her because she’s Syrian. Slowly we’re realizing how much we have all lost. RIP Rawan. Beirut will never be the same. #TalkAboutLebanon #beirut https://t.co/Fbe9661lR6 pic.twitter.com/MMKC84tnJf

The Dutch foreign ministry also announced on Saturday that Hedwig Waltmans-Molier, 55, the wife of the Netherlands ambassador to Lebanon, died from injuries incurred from the blast.

Waltmans-Molier worked as a human resources partner in the ministry and was based both in the Hague and Beirut.

“She was beloved by her colleagues and she will be very much missed. Her death is a loss for the Ministry of Foreign Affairs and for the country,” the Dutch government said in a statement.

Germany’s foreign ministry said on Thursday that a German diplomat working at their embassy was also among those killed.

'As  technicians working on the ground, we can say we have fading hopes of finding survivors'

“Our worst fears have been confirmed, a member of our embassy in Beirut was killed in the aftermath of the explosion in her home... all employees at the foreign office are deeply saddened for their colleague,” the statement said.

The search for victims continues, as scores of people have been recorded as missing. People have rallied to support each other in finding their loved ones. Online, an Instagram page called "Locate victims Beirut" was set up to help people find their friends and family.

The Lebanese army said on Sunday that there is little hope of finding survivors following days of searching.

Colonel Roger Khoury, who leads a group of military technicians working at the site of the explosion, told a news conference that the hopes of locating survivors are dwindling .

"After three days of search and rescue operations, we can say we have finished the first phase which involved the possibility of finding survivors," he said.

"As  technicians working on the ground, we can say we have fading hopes of finding survivors."