In a call with Arab American activists on Thursday, top Joe Biden foreign policy adviser Tony Blinken reiterated the campaign's pro-Israel stances laid out in a series of policy proposals and statements that have angered Palestinian rights advocates.

Blinken said Biden opposes the looming Israeli annexation of parts of the occupied West Bank, but he did not answer a question on whether the presumptive Democratic nominee would reverse a possible US recognition of Israeli sovereignty over Palestinian territories.

The aide, who served as deputy national security adviser under former president Barack Obama, also denounced the Boycott, Divestment and Sanctions (BDS) movement, which seeks to pressure Israel through non-violent means to end its abuses against Palestinians.

"You've probably heard the vice president say this. He opposes any effort to delegitimise or unfairly single out Israel, whether it's at the United Nations or through the BDS movement," Blinken said on Thursday.

Advocates for Palestinian human rights have long dismissed the argument that seeking accountability for abuses by the Israeli government is "singling out Israel" as a ploy to shield it from criticism.

"This is a signal that nothing will fundamentally change, even from the Trump administration, when it comes to holding Israel accountable for violations of international law, including settlements, refugee rights and annexation," said Palestinian American activist and comedian Amer Zahr, who has been outspoken against the Biden campaign's policy on the conflict.

The United States has used its veto power at the UN Security Council 44 times to protect Israel from measures denouncing its abuses against Palestinians.

Still, late during his presidency in 2016, Obama did allow a Security Council resolution condemning settlements as a "flagrant violation under international law".

On BDS, Blinken said the former vice president would "protect the constitutional right of our citizens to speak freely", citing Biden's opposition to Israel's ban on congresswomen Ilhan Omar and Rashida Tlaib for their support of the boycott movement.

'You've probably heard the vice president say this. He opposes any effort to delegitimise or unfairly single out Israel, whether it's at the United Nations or through the BDS movement'

Dozens of US states have passed laws restricting the right to boycott Israel. Federal courts have found anti-BDS laws in Kansas, Arizona and Texas to be unconstitutional.

But most centrist Democrats in Washington have voiced support for bills that would curtail the right to boycott, when it comes to Israel.

James Zogby, president of the Arab American Institute (AAI) who participated in the call on Thursday, said the caveat about respecting free speech is an important one that previous Democratic candidates did not care to underline.

"That was the important part," Zogby told MEE. "As far as I'm concerned, I don't care if you support BDS or not. Just make sure you don't take any steps to punish my support for BDS, so we've made progress."

On Thursday, Blinken repeated previous pledges by the campaign on restoring aid to Palestinians, reopening the Palestinian Liberation Organisation's office in Washington and re-engaging with international institutions that President Donald Trump had abandoned.

On the call, Zogby pressed Blinken about the campaign's stance on Israel, asking where a President Biden would change the pre-Trump status quo.

"You want two states? I'd love to see Palestinian sovereignty, but with 650,000 settlers in the West Bank, and with annexation a reality in many parts of the territories, what would you do differently to make that a reality that actually can happen, that the Palestinians can have sovereignty? And if not, then where do you go?" Zogby asked. Blinken struggled to answer the question, having ruled out any consequences for Israel's actions, including imposing conditions on US aid to Israel.

"It's a fundamental question, and one we're thinking very hard about even in the context of the campaign as we think about the possibility of an administration," Blinken told Zogby.

"I don't have a magic solution or a light-switch answer because I think things are so far removed right now from the prospect of two states that honestly in the first instance, we need a period of do-no-harm.

"And then if we get a period of do-no-harm, we need, I think, a period of what you'd probably call very incremental progress to try to build back an environment in which the prospect of actually negotiating on the issues that need to be negotiated is possible."

Zogby told MEE the fact that Arab Americans are being listened to by the Biden campaign is a sign of progress, although some activists found Blinken's responses frustrating.

"It's good to undo some of the negatives, but on their watch when he was in office, settlements grew and nobody held Israel accountable," Zogby told MEE after the call.

"'What are you going to do now?' I bet you nobody has asked that question [to Blinken] before. Now he's got some thinking to do, and we've got more talking to do, so I felt if we had not had the call, this issue wouldn't have come up. It did come up, and now we have an opportunity to keep talking about it."

The government of Israel's Prime Minister Benjamin Netanyahu had set a 1 July deadline for starting the process for annexing parts of the West Bank, but Israel appears to have postponed that amid global outrage against the move.

Blinken framed the looming Israel annexation merely as the kind of "unilateral action" that Biden would oppose whether it came from Israelis or Palestinians, effectively likening it to Palestinian efforts to seek statehood outside the process of negotiations.

"He believes in two states for two peoples," Blinken said of Biden. "That's why he opposes unilateral actions by either side, including annexation, that undermine prospects for two states. And it's also why he will stand resolutely against violence and incitement."

Anti-war groups and Palestinian Americans have been pressing the Biden campaign to ensure that Israel faces consequences for its ongoing occupation and de-facto annexation of Palestinian territories.

Blinken said Biden would pursue policies that would "create an environment where all people across the Middle East can aspire and actually live in dignity, prosperity and peace."

He discussed a range of issues on Thursday, including the domestic problems that Arab Americans face and the need for racial equality at home.

The foreign policy adviser vowed that Biden would uphold "human rights and democratic principles" in dealing with Arab countries, including Saudi Arabia and Egypt. 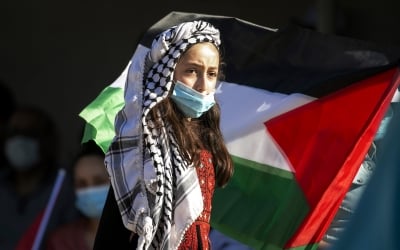 "It does a lot to undermine our moral standing globally and our ability to lead when Donald Trump calls Egyptian President [Abdel Fattah] el-Sisi, as he put it, 'my favourite dictator'," Blinken said.

"We would review the US relationship with the government of Saudi Arabia, to which President Trump has basically given a blank check to pursue a disastrous set of policies, including the war in Yemen, but also the murder of Jamal Khashoggi [and] the crackdown on dissent at home."

"The fact is Joe Biden is the Democratic nominee for president and he's running against the most dangerous, the most racist and the most corrupt president in history in this country," Scheetz told MEE.

He said another four years of "Trump's authoritarian, right-wing economic policies, besides his racist immigration policies" would "crush" Arab American communities across the US.