US Secretary of State Antony Blinken arrived in Tel Aviv on Saturday for landmark meetings with Arab countries that normalised relations with Israel during accords brokered by the United States under the Trump administration.

Blinken is also expected to discuss with top Israeli officials the possible revival of the 2015 Iran nuclear deal, and, with Israeli and Arab officials, how they will navigate the plunge in global wheat supplies due to Russia's war against Ukraine. Israel to host regional summit with UAE, Bahrain, Morocco, and US
Read More »

Israel announced on Friday that it would host the five-way regional summit involving the US, the United Arab Emirates, Bahrain and Morocco.

Palestinians have decried Arab normalisation with Israel as another example of Arab rulers advancing their own interests at the expense of the Palestinian cause.

The summit will take place in a luxury hotel in the southern Negev desert farm collective of Sde Boker, where the country's founding father and first prime minister, David Ben-Gurion, retired and is buried.

The Negev has recently been the site of controversy over development plans that have threatened Palestinian Bedouin communities in the region.

During this week's meeting, Blinken aims to show that the United States still has a deep interest in the Middle East even as the region has dropped in importance for Washington. China and now the Russian invasion of Ukraine appear to be the top priorities.

He also hopes to rally support for the US and Nato effort to blunt Russian aggression, amid heavy economic fallout from the war, including spiking energy prices and the a wheat shortage that is already hurting Arab countries.

The trip comes as the United States and Iran are in the final stages of negotiating a revival of the 2015 Joint Comprehensive Plan of Action, which aimed to prevent Tehran from developing a nuclear weapons capacity.

US officials say reaching a deal hinges on one or two key issues but that Tehran has to make "difficult choices" if it wants an agreement.

Israel defence establishment has been put on "alert" over the risk of aerial attacks taking place during a landmark summit with Arab countries that normalised relations with Israel in the Negev.

According to Kan News, several air force jets were deployed to the desert region ahead of the summit. 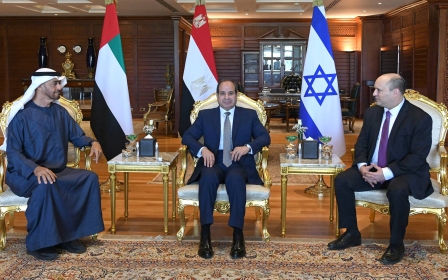