A protest scheduled in central Beirut under the slogan "Bring Saad back" was cancelled on Saturday, following a circular issued by the interior ministry.

The demonstration would have been the first collective show of support for Saad Hariri, who is allegedly being detained in Saudi Arabia following his surprise resignation as Lebanon's prime minister on 5 November.

The protest was planned as a row between Saudi Arabia and Lebanon over Hariri's freedom of movement escalated, with the Lebanese president accusing the Gulf-nation of "kidnap".

Warren Sleiman, a civil activist and organiser of the protest, said the idea behind the rally was to send out a message that was collectively shared. "We do not accept the power of other countries on our land," he told Middle East Eye. "What is happening to the prime minister is disrespectful."

However, Sleiman decided to call off the protest after receiving a call from army officials. "They gave their opinion and said they hoped the protest would not go ahead," he said, adding that there was no pressure on their part.

"We finally decided to call it off because we don't want the protest to take us places we don't want to go to," he said. According to Sleiman, there currently is "a feeling of unity among Lebanese people" and staging a protest could potentially backfire.

"We want back our prime minister and we [the organisers] didn't want [the protest to be used to] send out a message different from this," he said.

Interior Minister Nouhad Machnouk said prior to the protest that all demonstrations contravening a 2006 circular would be forbidden. The circular obliges organisers to file a formal request that includes the personal details of the organisers, as well as information on the place and time at which the protest would be held prior to the event.

Lebanon's Interior Minister Machnouk did not "ban" protests in Beirut; rather, (re-) asserted organizers must request permit and conform to 2006 circular stipulations. Question is, who will face consequences for "illegal" protests and who won't. https://t.co/AiGP4RnDbE

The demand should then be approved by the local governor, who has the power to reject it.

Despite the interior ministry circular and army caution, a small group of people gathered in Martyr's Square in the centre of Beirut. Blogger and activist Ghassan Germanos expressed his disappointment at the cancellation.

"I came because I believe it is our right to protest and express ourselves freely ... Nobody has the right do cancel a democratic expression [of dissent]," he said.

Germanos also added that it "was not a legitimate decision" and that he believed that, while no other protests are currently being planned, people would eventually take to the streets should Saad Hariri not return to Lebanon soon.

Meanwhile, a senior Lebanese official said Lebanese President Michel Aoun told foreign ambassadors that Hariri had been "kidnapped" and should benefit from immunity as prime minister.

"Lebanon does not accept its prime minister being in a situation at odds with international treaties," Aoun said in a statement.

Hariri's resignation, which caught even his close aides by surprise, has plunged Lebanon into crisis. It has thrust the country back to the forefront of a power struggle between Sunni Saudi Arabia and Shia Iran - a rivalry that has wrought upheaval in Syria, Iraq, Yemen, and Bahrain.

Aoun added that anything Hariri has said or may say "does not reflect reality" due to the mystery surrounding his status since his shock resignation in a broadcast from Saudi Arabia.

French President Emmanuel Macron, who made an unscheduled visit to Riyadh this week, phoned Aoun on Saturday to discuss the crisis, after comments by a French official that suggested Paris believed Hariri may not be a free man.

Riyadh says Hariri is free and had decided to resign because Iran's Lebanese ally, Hezbollah, was calling the shots in his coalition government.

'On one hand, we believe that we were the puppet of Saudi Arabia and that this led him to [what happened]. On the other hand, he is Lebanon's prime minister, and this is humiliating for us.'

Western countries have looked on with alarm at rising regional tensions.

Hariri has made no public remarks since quitting last week, when he said he feared assassination and accused Iran along with Hezbollah of sowing strife in the Arab world.

In the streets of Beirut, however, the vast majority believed their prime minister is being held against his will and demand his release.

"We have mixed feelings for this situation," Germanos said. "On one hand, we believe that we were the puppet of Saudi Arabia and that this led him to [what happened]. On the other hand, he is Lebanon's prime minister, and this is humiliating for us."

Coronavirus
'You have no one but us': Lebanon’s political elite resurrected amid coronavirus crisis
Inside Lebanon
Lebanon urged to end 'abusive' kafala system after suspected suicide of domestic worker
Coronavirus
The Lebanese women sewing protective suits to contain the coronavirus outbreak 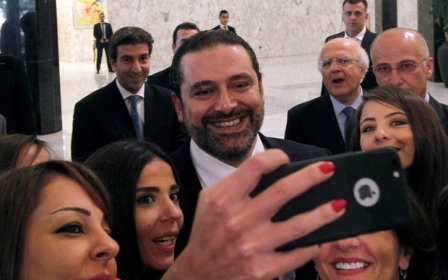