Bringing out the dead: The grim aftermath of the battle for Mosul

Omar escaped an air strike that killed eight of his family. Now he has gone home for a horrific task: retrieving their bodies 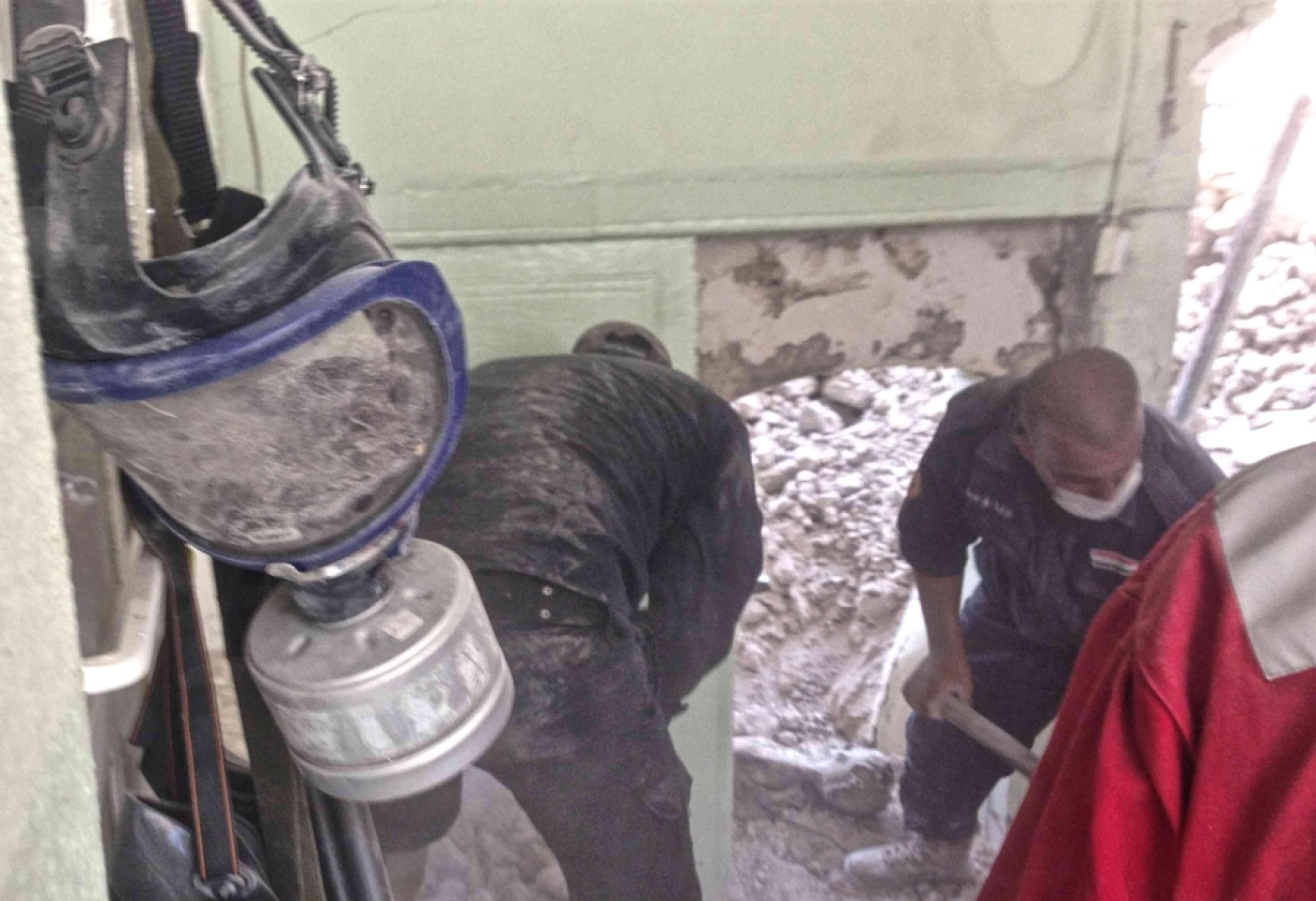 Despite the dust and smell, volunteers discard their gas masks due to the heat (Tom Westcott/MEE)
By
Tom Westcott

Throwing up clouds of masonry dust, five men in overalls hack their way into the remains of half a house in Mosul’s Old City. They are looking for bodies, buried under rubble for over a month after the house was struck by one of the many air strikes carried out during the Mosul conflict.

The air is pungent with the smell of the decomposing corpses they are searching for. But the men - volunteers with Mosul’s civil defence units - have abandoned their gas masks, the heat is unbearable in the intensity of 48C-degree summer day.

They smash pickaxes into rubble piled up behind a green-painted wall, over which a fading black-and-white family photo still hangs. The wall, along with three small rooms and the balcony above is all that survived the air attack, the intended target of which Omar believes was a nearby mosque.

The men have abandoned their gas masks, the heat unbearable in the intensity of 48C-degree summer day

Islamic State (IS) fighters had been sheltering in the mosque but the air strikes targeting them also demolished several homes.

“My whole family was here when the air strikes hit and only five of us got out alive,” said Omar Zwar, 25, his green eyes welling up with tears as he recalled that July day.

“It killed eight of my family. Most of them were under the rubble, and I tried to cover the other bodies as best as I could with stones before we fled.”

This is the first time he has returned to what remains of his family’s home, after approaching the civil defence units to ask for help. These volunteer teams have the grim task of searching for civilian bodies in the ruins of post-conflict Mosul.

The civil defence team is trying to retrieve the bodies of Omar’s wife, his one year-old daughter, his father, his older brother, his brother’s wife, and three of his brother’s children. The work is slow, sad and extremely tough.

After two hours of work, the now overpowering smell of decomposition tells the men they are close to the bodies. Another worker carries a folded pile of black body bags up the alleyway from the street.

The first body they find in the rubble is Omar’s father. The smell is so intense that several men put their gas masks back on. Before they close the body bag, they remove a ring and hand it to Omar. He holds it out in front of him and says softly: “My father’s ring.”

Above the men, vines trail from broken trellises still attached to a now-lopsided balcony. Items strewn around the three rooms hint at the house's past as a much-loved family home.

Omar's shoulders shake as the tears come. He knew they were dead, but reliving the reality brings a second wave of grief

The digging pauses when the men, now working with small folding spades, gradually expose a small hand, a wrist and then an arm. “I’ve found a girl,” calls out one of the men, as he pauses to remove small gold bangles from the girl’s wrist.

Omar stares at the circles of gold that belonged to his brother’s daughter, sitting small in the palm of his hand, his shoulders shaking as the tears come. He knew they were dead, but reliving the reality brings a second wave of grief. He leans his face against a bent door frame.

He carefully places the items of jewellery into a small leather bag. He is loath to admit it, but he will almost certainly need to sell them. “We have nothing left,” he says. “May God help us.”

There is a low shout as the workers retrieve the disembodied head of a woman. Auburn-tinted hair pokes out from beneath a turquoise headscarf, now framing decomposing flesh. Omar staggers and recoils. “My brother’s wife,” he mutters.

“Her earrings. Please take out her earrings,” he says, choking on the words. Two of the men try, but the awful task is too intricate for their hands, made clumsy by thick rubber gloves and the disintegrating flesh. One of them places the head tenderly into a body bag and the men turn back to the rubble.

Every few minutes, they retrieve scarcely recognisable fragments of the rest of her body, a joint bone, a piece of limb. Each item is placed gently in a corner of the body bag. The black expanse of plastic is vast around these small pieces of a person.

Each item is placed gently in a corner of the body bag. The black expanse of plastic is vast around these pitifully small pieces of a person

Omar phones his remaining family members to let them known which bodies have been found.

After the air strike, he managed to flee with his four surviving relatives to the relative safety of Iraqi army positions and, from there, to East Mosul, where they have been staying with extended family members.

“We’ve been working here since 10am and I’d guess it will take us another five hours to reach all the bodies,” says civil defence volunteer Ahmed, wiping sweat and dust from his forehead.

The body bags are carried through the alleyway and down the narrow steps, then laid out in a ruined Mosul street.

The journey of these deceased is not yet over. Their bodies must be taken to a hospital for Omar to apply for death certificates. Only then will he be able to bury them in a graveyard, a month and a half after they were killed.

Struggling amid rubble and mines

No figures have been released for the civilian dead in Mosul, but they are expected to be significant.

Recently, the Iraqi ministry of health submitted a request to an international health-care organisation working in Iraq for the provision of 2,000 body bags to help support Mosul clearance operations – according to the organisation - hinting at an initial, very conservative, figure.

With many bodies still to be recovered and hundreds buried under rubble near the riverside that will probably remain unaccounted for, the true civilian death toll of west Mosul will probably never be known.

Now the main military operations in Mosul are finished, every day civilians approach the civil defence teams with requests to visit specific homes and help retrieve loved ones. Some know the houses. Others only know rough locations.

Mariam, in her 40s, leafs through the seven death certificates she already has for relatives who were killed as they tried to flee the fighting in Mosul.

One was shot dead by an IS sniper and six other family members were among mass casualties caused when an IS wife disguised as an ordinarily civilian amid a group of fleeing people blew herself up near a military position.

Fleeing civilians were unable to carry their dead. Another civil defence team is trying to help Mariam relocate the exact point where the attacks happened. She hopes the bodies were interred nearby.

In the chaos and ruins of the Old City, where so much rubble has been ploughed aside by bulldozers trying to forge navigable roads, finding those bodies seems like a slim hope.

After several hours working in the ruins of Omar’s house, one of the civil defence workers emerges from the alleyway, whitened by masonry dust. “We can’t do it, it’s just too hard. We can’t get them out,” he says. One of his superiors turns on him.

“You have to get them out, you have to find a way,” the superior insists. “Only stop if you find mines or explosives, and then we will deal with those separately.”

Unexploded ordnance, mines and IEDs are one of the biggest risks faced by the civil defence teams. In properties where these are discovered, the teams call in military engineering units to clear the dangers, only continuing their work once the premises have been declared safe.

“We are all volunteers and since early in the Mosul war we have been working on getting bodies out from under the houses,” says city resident Nashwan, 37. “We feel sad, but we just try and stay focused on what we need to do.”

The civil defence teams are not permitted to give a figure for the bodies they have retrieved since the start of the Mosul conflict. Ahmed says some days the work is so hard, they can only retrieve six or seven bodies.

On other days, when the work is faster or when they find a large number of bodies in one basement, numbers can reach 60 or 70.

A few weeks ago, the units were still making the occasional miraculous discovery of civilians who were still alive, such as family of six who had survived for 25 days trapped in a basement.

“The father came to us and said he’d had no news of his family for 25 days and asked if we could help him recover the bodies for burial,” explains Aws Basel, 30, another volunteer.

“It took us just one hour to dig through to the basement and we found they were all still alive, although they had run out of food and, if we had been two days later, they would have died.”

'There are many more houses like mine, with bodies trapped underneath, just in this small area. This is all I can do to help'

He says the family, including a woman and a child, had no idea that Mosul had been liberated and assumed the war was still going on.

Hopes of finding further civilians alive have since faded. The work is now focused on recovering the dead, to give some sense of closure to the living, who want only to give their loved ones the dignity of a proper burial.

A few days later, Omar was working in a nearby street with a group of civil defence workers. They had managed to extract five of his family members from the rubble, he says, but three were impossible to retrieve by hand.

With no work and his life in ruins, he now spends most of his days with civil defence, helping guide them through the ruined buildings of Mosul’s Old City, looking for other people’s lost family members.

“There are many more houses like mine, with bodies trapped underneath, just in this small area,” Omar says. “This is all I can do to help.” 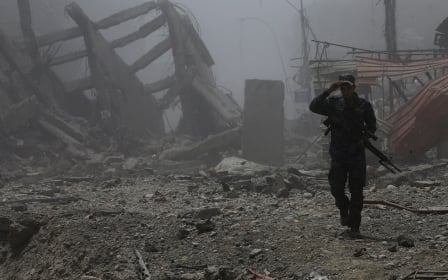 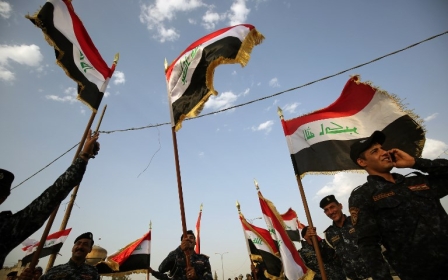 Iraq at War
The final defeat of IS in Mosul? Not by a long shot
Hassan Abu Haniyeh 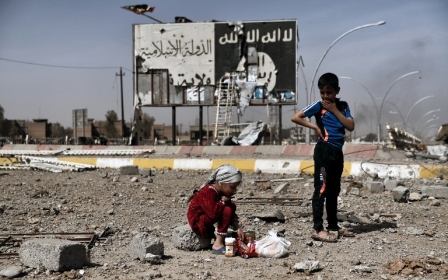