Mosul's bloodbath: 'We killed everyone - IS, men, women, children'

Iraqi soldiers receive brutal, final order in last days of battle with IS: kill anything that moves. The results can be found crushed into the rubble 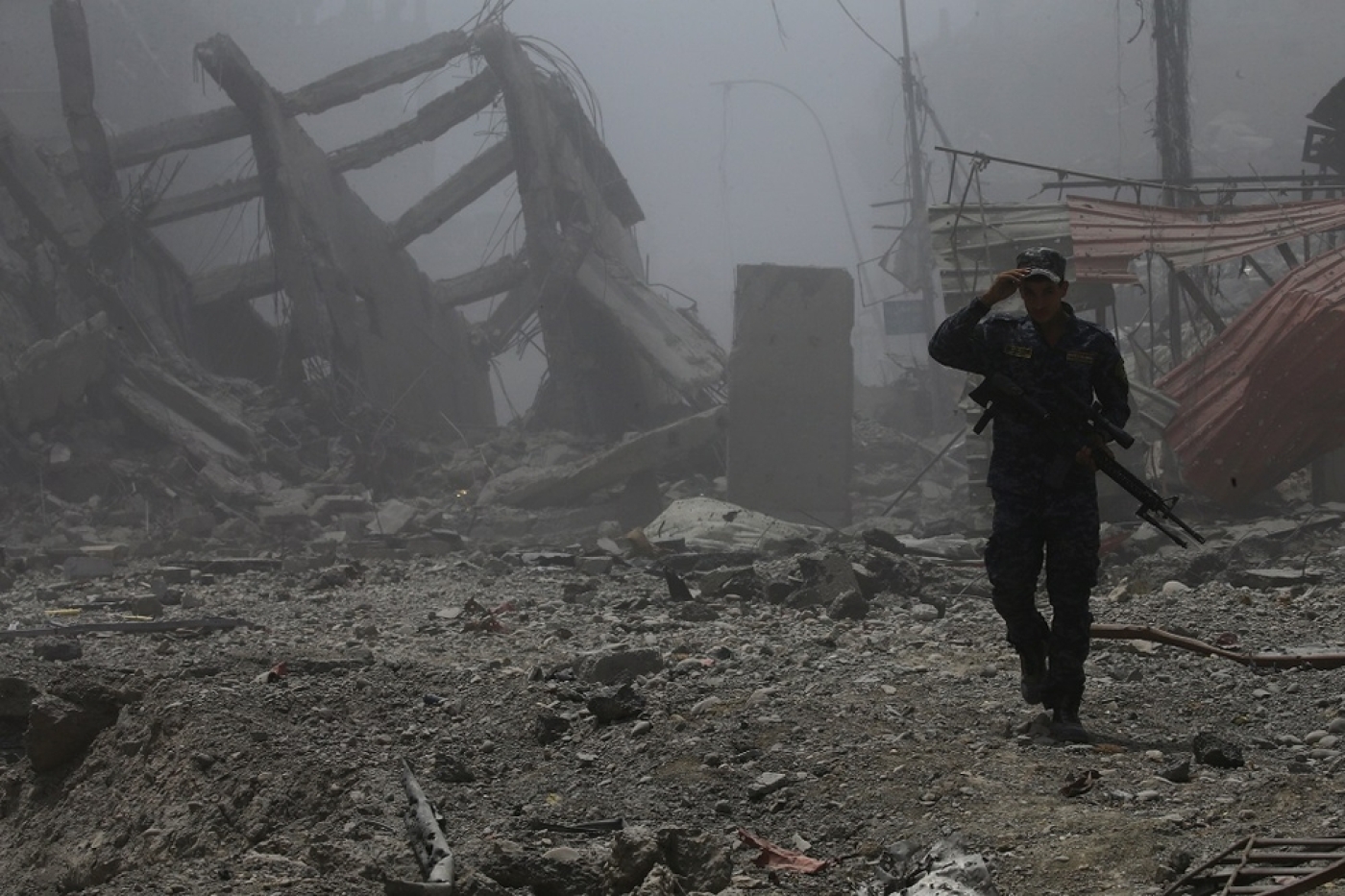 MOSUL, Iraq - The Iraqi soldier looks out across a wasteland of rubble that crumbles steeply down to the banks of the Tigris, and contemplates the last days of savage fighting against the Islamic State group.

"We killed them all," he says quietly. "Daesh, men, women and children. We killed everyone."

What remains of this part of Mosul's Old City, where IS militants made their last stand, and what lies beneath betray the horrific final days of the battle.

'We killed them all. Daesh, men, women and children. We killed everyone'

Hundreds of corpses lie half-buried in the broken masonry and rubble that was once a bustling, historic quarter. The stench of decaying flesh, which comes fast in the 50C summer heat, overwhelms the senses.

Feet are the most distinguishable remains; there are many poking out from the rubble.

That final killing spree has left its mark, and it is one some appear keen to cover over.

Over the last week, armoured bulldozers have trundled back and forth over the crumpled houses, grinding uncounted corpses into the rubble.

But the dead refuse to go away. Rotting body parts glow a reddish-brown amid the pale grey of the undulating heatscape of masonry, dust and broken buildings.

"There are many civilians among the bodies," an Iraqi army major tells MEE. "After liberation was announced, the order was given to kill anything or anyone that moved."

Speaking on condition of anonymity, the major says the orders were wrong, but the military had to follow them.

"It was not the right thing to do," he says. "Most of the Daesh fighters surrendered. They gave themselves up, and we just killed them."

The major scoffs at claims made by some Iraqi soldiers that the jails in Baghdad were already too full to take any more IS prisoners.

"It's not true, we have plenty of prisons, but now we are not treating the prisoners like we did before," he says. "Earlier in this war, we arrested a lot of Daesh and brought them to the intelligence services. But now, we make very few arrests."

On Monday, several journalists witnessed an IS captive being dragged through the ruined streets of the Old City by special forces soldiers.

The man was bound and had a rope fastened around his neck. The journalists had their memory cards confiscated by soldiers and were ordered to leave.

"There is no law here now," the major says. "Every day, I see that we are doing the same thing as Daesh. People went down to the river to get water because they were dying of thirst and we killed them."

Corpses line the western banks of the Tigris. Killed in air strikes, fighting and executions, or having died of hunger or thirst, some have washed ashore while others float in the blue waters. Some of the bodies are small. They were children.

Footage released on social media on 17 July shows Iraqi helicopters carrying out what are believed to have been some of the last air strikes of the nine-month-long battle for Mosul.

To a soundtrack of cheerful, victorious music, the helicopters target desperate people attempting to escape the Old City by swimming across the wide river.

Nearby, soldiers pose for victory photos before an Iraqi flag, the pole planted atop a pile of rubble and body parts.

They have become inured to the landscape of death over which they move. The brutality of this long conflict and the barbarity of their enemy have taken their toll on the Iraqi armed forces. There is little humanity left.

Soldiers - most with scarves wrapped around their faces to fend off the overpowering stench of death - pick through the rubble and corpses, looking for modest spoils of war. Burned and broken pieces of AK47s, empty magazines, a few tins of ammunition.

Late last week, Iraqi forces were still being attacked by occasional IS militants emerging from the rubble or collapsed buildings to shoot at soldiers or hurl grenades.

On Thursday, a soldier approached what he thought was an IS corpse. The militant was pretending to be dead and shot the soldier at close range with a pistol.

There were still people alive under the rubble on Monday, when four IS members - two foreign fighters and two Iraqis - were found hiding. All four were shot, according to an Iraqi soldier stationed there.

These are likely to be among what soldiers believe are comparatively few survivors, some of whom are still managing to target Iraqi forces from underground hide-outs.

Last Thursday, Iraqi army soldier Haidar said eight tunnels with people inside had been identified by the military, mainly from interviews with women and children who had escaped.

"In our section, there are three. One tunnel has six Iraqi Daesh fighters, in another there are 30, including nine women, and in the third, we do not know the exact number but people coming out tell us there are a lot," he says.

It is not known what became of any of those people - but very few civilians have emerged alive from the ruins since Thursday.

Supplies of food and drinking water are either scarce or non-existent below ground.

The last civilians to emerge from the rubble resembled concentration-camp victims, many reporting they had not eaten for a fortnight. Some were near death.

Last Wednesday, a starving Yazidi boy, 11, wept in a field hospital where he was treated for extreme dehydration and malnutrition as he described watching four other children die of thirst.

IS abducted the boy and his 13-year-old sister, who he had not seen for the preceding 30 days, from their home town in Iraq's Sinjar mountains in 2014.

IS massacred thousands of Yazidis - whose ancient faith they decry as devil-worship - and took thousands more women and children into captivity.

"We will give them nothing," Haider said on Thursday. "Yesterday, one of the soldiers relented and bent down to hand a bottle of water into a hole where he thought civilians were trapped and an IS fighter seized the gun from his shoulder. It was an M4 (assault rifle)."

Near the river, bulldozer driver Hussein said that his job was to manoeuvre over the rubble, filling in any suspicious entrance holes to block possible IS activity.

"I fill the holes with rubble so the Daesh can't come out again," he says, adding that he was not sure whether he was burying people alive.

"Some of the tunnels stretch a long way and maybe they can get out some other place. But my job is to make sure they can't come out of these holes again."

Even in areas of the Old City that were liberated weeks ago, death still lingers.

Near the remains of the destroyed al-Nuri mosque, the blackened disembodied head of a female IS adherent who blew herself up among fleeing women and children lies beside a crater.

In the dust nearby is a hairbrush, a fashionable handbag, colourful clothing - small things with which people had hoped to escape - and a woman's leg.

A cat steals across a ruined street with a piece of fresh meat hanging from its jaws. It is inevitably human - the only flesh left anywhere in the Old City is that of dead people.

New corpses still appear at different locations across the Old City. Some have clearly been executed, shot in the head at close range.

Many still have ropes trailing from tied hands and feet, indicating that either while dead or alive, they were dragged through the deserted streets. Many have been set on fire to curb the smell of decomposition.

US-backed coalition claims liberation of half of Raqqa
Read More »

Iraqi forces proudly claim to have killed at least 2,000 IS militants in the last stages of the Old City battle. Many of these were foreign fighters.

No one has offered a figure for the dead civilians - the women and children who could not escape.

The way the bulldozers have churned over the rubble and corpses and then driven back and forth over the terrain means that the real loss of life in the final bloodbath of the Mosul conflict will never be known.

The once-elegant historic Old City of Mosul is now an expansive graveyard - a crumbled flattened monument to one of the most merciless conflicts of the still young 21st century. 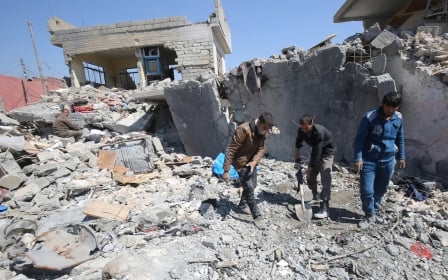