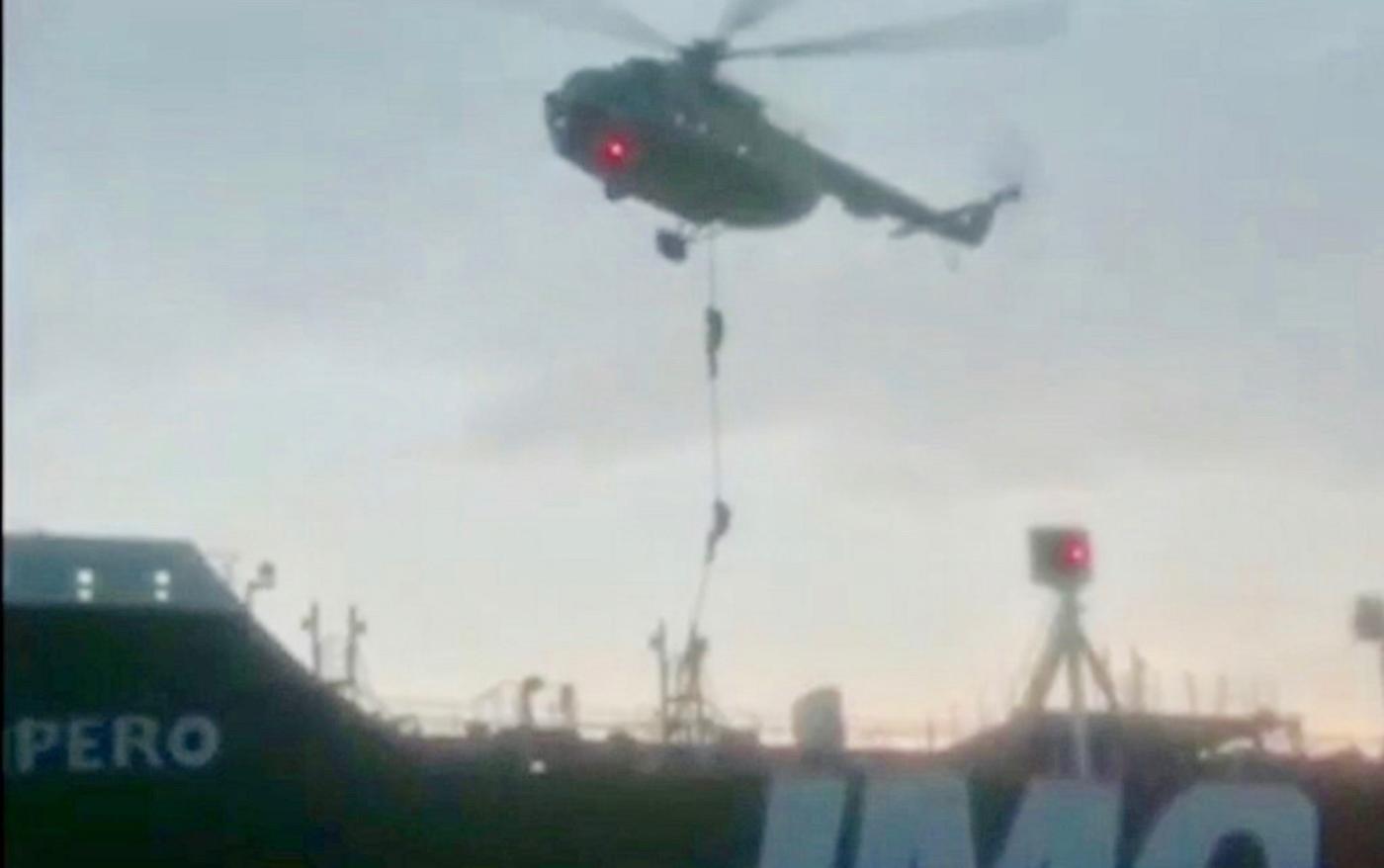 IRGC seen boarding British-flagged Stena Impero in Strait of Hormuz on Friday, from image grab of IRGC video via Sepah News (AFP)
By
MEE and agencies

London on Saturday urged Iran to de-escalate tensions in the Gulf by releasing a British-flagged ship it said had been illegally seized in Omani waters in an "utterly unacceptable" gambit.

Tehran was defiantly ignoring mounting European appeals to free the captured oil tanker and its mostly Indian crew, as the US prepared to redeploy troops to Iran's regional arch-rival Saudi Arabia, AFP said.

Iran's Islamic Revolutionary Guard Corps (IRGC) said it seized the Stena Impero ship on Friday for breaking "international maritime rules" in the Strait of Hormuz, a Gulf choke point for about a third of the world's sea-borne oil.

The IRGC then posted a video online showing speedboats pulling up alongside the Stena Impero tanker, its name clearly visible, Reuters reported. Troops wearing ski masks and carrying machine guns rappelled to its deck from a helicopter, the same tactics used by British Royal Marines to seize an Iranian tanker off the coast of Gibraltar two weeks ago.

Friday's action in the global oil trade's most important waterway has been viewed in the West as a major escalation after three months of confrontation that has already taken Iran and the US to the brink of war, Reuters said. The seizure sent oil prices sharply higher.

The Stena Impereo was impounded for allegedly failing to respond to distress calls and turning off its transponder after colliding with a fishing vessel, Iranian authorities said.

The vessel, carrying no cargo, was taken to the Iranian port of Bandar Abbas. It will remain there with its 23 crew members - 18 of them Indians - while the accident is being investigated, Iranian news agencies cited the head of Ports and Maritime Organisation in southern Hormozgan province, Allahmorad Afifipour, as saying.

The capture came just hours after a court in the British overseas territory of Gibraltar said it would extend by 30 days the detention of the Grace 1 Iranian tanker seized by British authorities in the Mediterranean on allegations of breaching EU sanctions against Syria. "They see this as a tit-for-tat situation," British Foreign Secretary Jeremy Hunt said after talks with his Iranian counterpart Mohammad Javad Zarif and a meeting of the UK's emergency response committee.

"Nothing could be further from the truth."

Hunt said that while the Grace 1 had been detained legally, "the Stena Impero was seized in Omani waters in clear contravention of international law. It was then forced to sail into Iran. This is totally and utterly unacceptable."

The crisis comes at a difficult time for the British government, which faces a leadership change next week in which Hunt is one of the last two contenders to become prime minister along with the favourite, Boris Johnson, the Wall Street Journal said.

Germany and France urged Iran to release the tanker, whose seizure Berlin called a "dangerous further aggravation of an already tense situation".

US President Donald Trump said Friday's incident "only goes to show what I'm saying about Iran: trouble. Nothing but trouble." "It is IRAN that guarantees the security of the Persian Gulf & the Strait of Hormuz. UK must cease being an accessory to #EconomicTerrorism of the US," he tweeted.

Zarif told Britain's Hunt that the ship must go through a legal process before it could be released, Iran's ISNA news agency reported.

Tensions in the Gulf have soared since May, with Trump calling off air strikes against Iran at the last minute in June after the Islamic republic downed a US drone.

The US has also blamed Iran for multiple attacks on tankers in the Gulf.

Iran said it had opened its investigation on Saturday into the newly seized tanker.

Owned by Swedish operator Stena Bulk, the tanker's crew of 23 consists of 18 Indians, three Russians, a Latvian and a Filipino.

New Delhi, Manila and Riga said they were in touch with Tehran to seek the release of their nationals.

Stena Bulk said its insurers had been in contact with the head of marine affairs at Bandar Abbas, who reported that the crew were in "good health".

A formal request is being prepared for a visit to the crew.

The head of marine affairs "confirmed to them that no instructions have been received so far as to what will happen to the ship".

As tensions soared, Saudi Arabia said it would once again host US troops to boost regional security.

The Pentagon said the deployment "ensures our ability to defend our forces and interests in the region from emergent, credible threats".

The US military also said its patrol aircraft were monitoring the Strait, and announced a "multinational maritime effort" to ensure freedom of navigation in key waterways.

The escalation comes more than a year after Washington unilaterally withdrew from the 2015 Iran nuclear agreement and began ratcheting up sanctions against Tehran.

Earlier this month, Iran exceeded the deal's caps on uranium enrichment, aiming to pressure the remaining parties - including Britain, France and Germany - to make good on promises to help prop up its economy.

Tehran has repeatedly threatened to close the Strait of Hormuz if attacked.