Cairo train crash: Witnesses describe 'hellish' scene as they tried to save victims 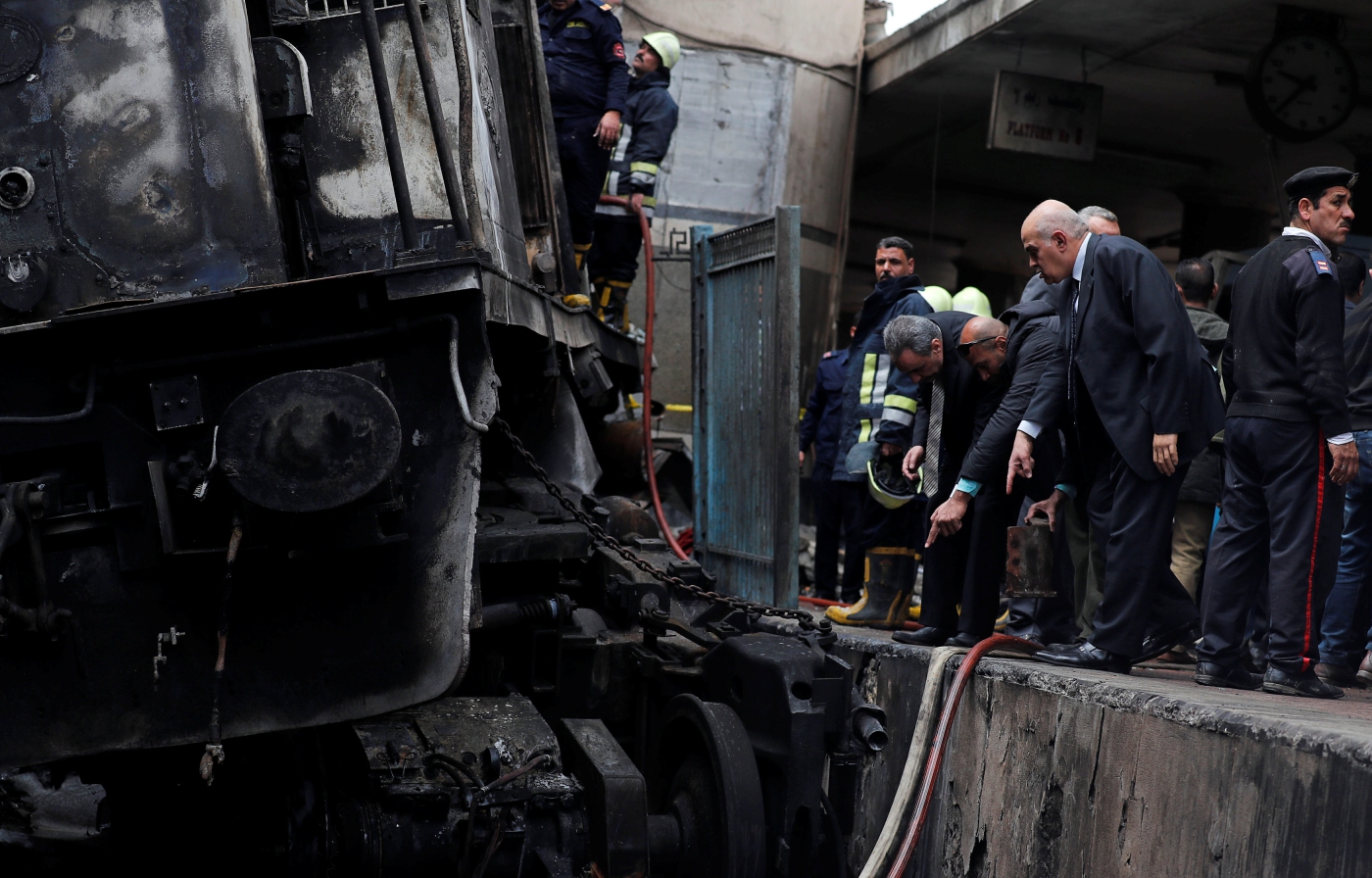 As the death toll mounted throughout the day on Wednesday after a crash at a Cairo train station, dozens of people gathered in front of a morgue in the city's crowded downtown area to inquire about the fates of their loved ones.

Similar scenes - relatives frantically searching for victims and survivors - unfolded in the emergency rooms of nearby hospitals as well.

The train crashed on Wednesday morning, bursting into flames at Cairo Train Station and killing at least 22 people. Ahmed Mahrous dropped off some family members that morning at the station, as they had planned to attend a wedding in the coastal city of Alexandria, west of the Egyptian capital.

By evening, five of them had been identified and pronounced dead at the morgue and two others were being treated for injuries at Cairo's Coptic Hospital, while the whereabouts of two more remained unknown.

"The total was nine," Mahrous said.

He and his relatives divided themselves in groups, going to morgues and hospitals to find the still-missing family members.

"The officials are treating us as if we are demanding a lot. We only want to find the bodies. The policemen kicked us out of the hospital and we had to bribe a nurse in order to go in," said Mahrous, breaking down in tears.

A man accompanying Mahrous, who didn't give his name, added: "The wedding [has become] a nightmare."

Deadly train incidents have become all too common in the past few years, Egyptians say, with Wednesday's crash the latest in a series of near-annual rail catastrophes that have claimed dozens of lives.

Egypt's public prosecutor said the incident in Cairo occurred after the train's operator left his position without taking appropriate measures to disable the locomotive, causing the train to smash into a platform.

That's what led to the massive fire, the prosecutor said.

Photos of the aftermath of the incident showed a fire on the platform and an adjacent building.

Hosaam Ali, 45, who works in one of the kiosks at the Cairo train station, said he was cleaning his shop and preparing to receive a new shipment of snacks when the train struck the platform.

"We heard a big bang at first and then a big explosion," he told MEE.

'We only want to find the bodies. The policemen kicked us out of the hospital'

"The fire was like hell. People were running while their bodies were on fire. We tried to run after them to put out the fires."

By the time the police and firefighters arrived, some bodies had turned to ashes, Ali said, despite the rescue efforts of people at the station.

"We only had small buckets of sand at the station and expired fire extinguishers," he said.

"I saw one woman on fire on the rails, but the fire around her was huge. Everyone froze, until she screaming stopped."

Mohammed Ahmed was injured while working at one of the station’s fast food restaurants.

His wife, who didn't provide her name, said she first heard about the incident on television. She later spoke to her husband, who said the fire reached the restaurant, which is located in a building near the platform where the crash occurred.

Ahmed and some other workers tried to put out the flames, his wife said, but to no avail. "There was a water outage," she said, without going into further detail.

Egypt’s railway network has been plagued by derailments, fires and power outages.

'I saw one woman on fire on the rails, but the fire around her was huge. Everyone froze, until her screaming stopped'

Critics have questioned the Egyptian government's resolve to address longstanding problems with the country's transportation system.

"You tell me, 'I will spend 10bn [$570m] to digitise and mechanise [trains].' Those 10 billions, if I put them in the bank and get 10 percent interest, that's 1 billion [Egyptian] pounds. And under the new interests rates, that's 2 billion pounds," the Egyptian president said at the time.

He went on to berate citizens who complained about the price of public transportation. Diplomacy
Egypt rebuffs Turkey in spat with EU after executions