'A call for democracy in Egypt': Dozens protest outside Sisi hotel in New York 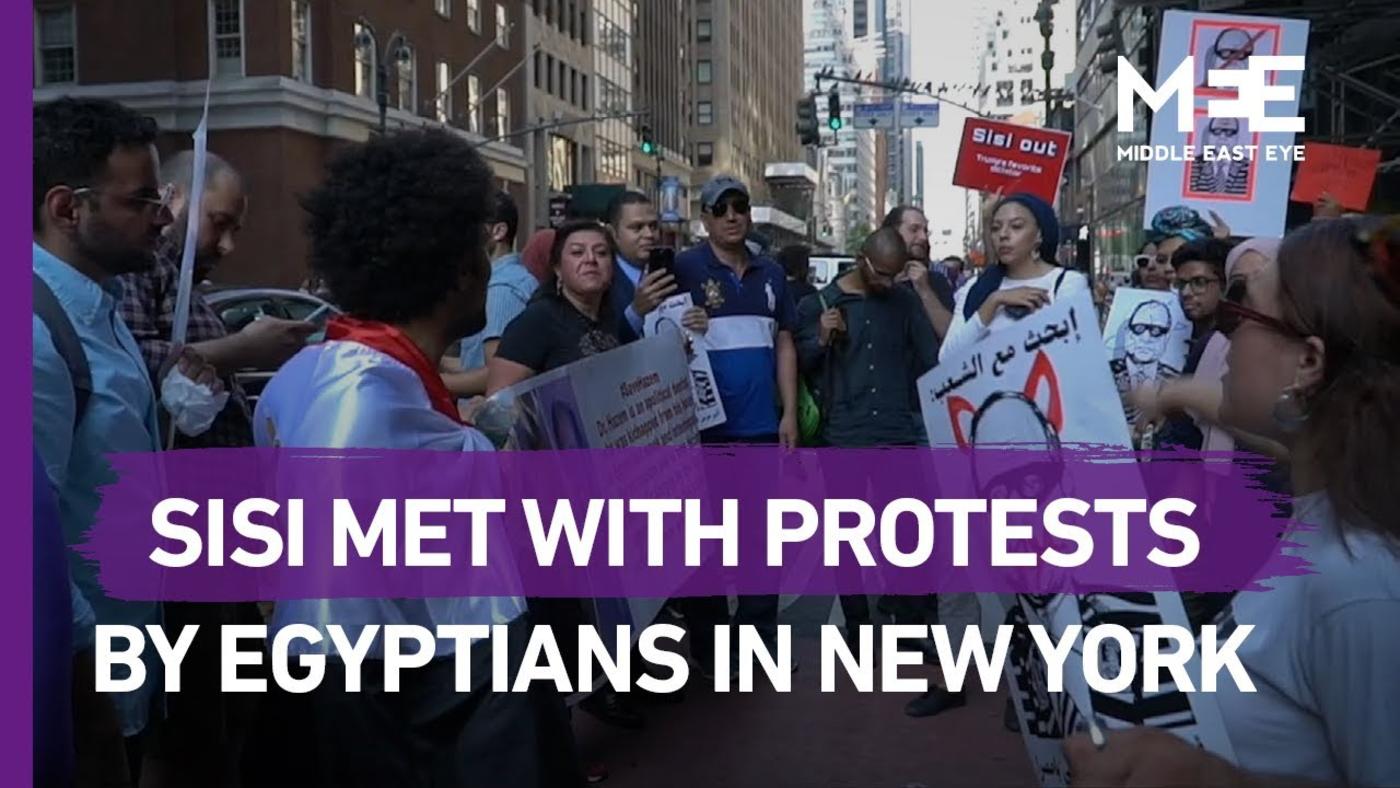 The demonstrators chanted in both Arabic and English, often drawing curious stares from bystanders and the passing traffic (MEE/Azad Essa)
By
Azad Essa
in
New York City

A group of only 60 they might have been, but their chants were loud and boisterous.

Inspired by protests across cities in Egypt against the rule of Abdel Fattah el-Sisi, a group of Egyptian Americans assembled on Sunday outside the New York hotel where the Egyptian president is currently staying, calling for him to step down.

Security outside the Lotte New York Palace, where Sisi is residing while attending the United Nations General Assembly (UNGA) this week, was extremely tight.

Protesters stood on Madison Avenue for around two hours, holding signs and posters describing Sisi as "Trump's favourite dictator", a reference to Trump's reported comment about the Egyptian president prior to their meeting at the G7 summit in France last month.

Sisi and Trump are scheduled to meet again for bilateral talks later on Monday at the United Nations Headquarters, according to the US President's published schedule.

The demonstrators chanted in both Arabic and English, often drawing curious stares from bystanders and the passing traffic.

"We are Egyptians from all walks of life. We are not part of any organisation. This was just a spontaneous grouping of people," Dalia Wassef, a protest organiser, told Middle East Eye.

"We are here to protest against Sisi's brutal, corrupt regime and call for democracy in Egypt".

Echoing Wassef's comments, another protester who identified himself as Ali, told MEE that it was an important time for Egyptians to "come together and work towards getting rid of this guy".

"Whether you are Islamist or liberal, we all have to get rid of him. He has no legitimacy," Ali said.

Over the past three days, Sisi has been facing mounting calls for him to step down as protests in Egypt spread from city to city over the weekend.

According to MEE's correspondent in Egypt, protesters have faced arrest as well as a violent crackdown by riot police.

The AFP news agency reported that as many as 365 people have been arrested since Friday.

On Sunday, authorities detained Mahienour El-Massry, an award-winning human rights lawyer, after she looked into the cases of those protesters who had been arrested by the state.

Since taking over Egypt in a coup in 2013, Sisi has demonstrated little tolerance for dissent.

Last month, ahead of a G7 Summit, Human Rights Watch, along with 19 other human rights organisations, called on French President Emmanuel Macron to persuade Sisi to "drop all charges and unconditionally release all arbitrarily detained human rights defenders and journalists, and drop abusive probation measures against them.

"Egyptian social and economic rights defenders, trade union activists, journalists and whistle-blowers, as well as feminist, LGBTQIA+ organisations and civil society at large have not been spared in recent waves of state crackdown on dissent," the letter to Macron read.

The protesters who gathered in New York on Sunday told MEE that given the scale of repression back home, they felt it was important to speak up in the US.

"We are concerned about the future of our country and we want to support those who are protesting in Egypt," Wassef, the organiser, said.