GAZA CITY – In Gaza, cancer patients are in desperate need of help.

The Palestinian ministry of health held a press conference on Monday to ask for urgent assistance for hundreds of cancer patients in the Gaza Strip.

According to health officials, 700 patients, including 200 children, at Gaza City's Abdel al-Aziz al-Rantisi Hospital were unable to be administered chemotherapy on Monday due to a severe shortage of medicine and equipment.

“Our patients are in danger. Today the patients came to the hospital and we informed them that we don’t have medical treatment for them, they went home crying,” said Mohamed Abu Salmiya, the hospital's director.

“We are in a very dangerous situation, if we don’t find a solution we will lose the lives of hundreds of patients,” he added.

We are in a very dangerous situation, if we don’t find a solution we will lose the lives of hundreds of patients

Medical professionals told Middle East Eye that stockpiles needed for treatment have been depleted throughout most of enclave.

Dr. Mahmoud Daher, the World Health Organisation’s director in Gaza, said: “We were informed that the majority of the medicines that are required to manage cancer patients are depleted, and this is an escalation of the existing situation.”

"The chronic drug shortage has been going on in the past years; all the cancer patients are at risk of losing their lives because of the situation," he added.

"Eighty percent of the medicine used for the chemotherapy of 700 people is not available in the main cancer department in the ministry of health, which is the provider for medical services in the Gaza Strip," Daher added.

One such drug called Neupogen, which is used to boost a patient’s immune system, has become nearly completely exhausted, said Ashraf al-Qedra, a spokesperson for Gaza's health ministry.

Asmaa Bahnsawi, a cancer patient, expressed shock after hearing that drugs for her breast cancer are unavailable.

“I came here today because I need a chemotherapy session dose, but the doctor told me there is no dose or injection. I was surprised, shocked and speechless,” she told MEE.

Bahnsawi discovered her breast cancer in December 2017, then started her first chemotherapy session in March. She said she has been struggling for two months after she was forced to purchase Neupogen herself.

“I was asking the doctor today when I can get my net chemotherapy session, and he said ‘I can’t answer you,’” she recounted.

“What will happen to me until my next chemotherapy? Doctors told me to take painkillers, but if I don’t receive my chemotherapy by next week I will die,” she added.

One such case is Mahmoud Ahmad, a 27-year-old lawyer who has osteosarcoma, a type of bone cancer. Israel denied his request to leave for medical treatment and the doctors told him that a “protocol chemotherapy” treatment is necessary, which is not available in Gaza.

Khadija, Ahmad’s mother, told MEE that her son is living in deep depression and refuses to see anyone.

Khadija said that she is very worried about her son, adding: “Every passing day, seeing my son in pain kills me. I can’t do anything about it, and the condition of my son is getting worse.”

“Israel has no mercy, they don’t know how precious my son is,” she added.

Occasionally, the wait for permits to leave for treatment ends fatally.

After three months of waiting for his medical permit to get his chemotherapy, 62-year-old Subhi Abu Nour passed away after suffering from lymphoma, a type of cancer in the lymph nodes, on 12 August.

If I don’t get my permit in the next couple of days, I’ll lose my life and my kids will lose their mother

Areej Abu Zayed, a 33-year-old mother of four children, has breast cancer and has waited for chemotherapy for more than a month. Her husband has had to care for the kids while she remains admitted at the Rantisi hospital.

“If I don’t get my permit in the next couple of days, I’ll lose my life and my kids will lose their mother,” she told MEE.

“It’s very hard for all of us [cancer patients] not being able to get our treatment. We have the right to receive our medicine. My life is in a dangerous risk, I don’t want to die,” she added, before she started coughing so hard that her mother was moved to help her to put on an oxygen mask.

Israel continues to impose restrictions on the Gaza Strip. It has banned and delayed various types of medicine from entering the besieged enclave.

The Palestinian Authority in Ramallah will reportedly send a truck of cancer medicine to Gaza on Tuesday in an attempt to alleviate some of the suffering that patients are currently going through.

In the meantime, Palestinians like Zayed, Ahmad and Bahnsawi will wait to get treatment. 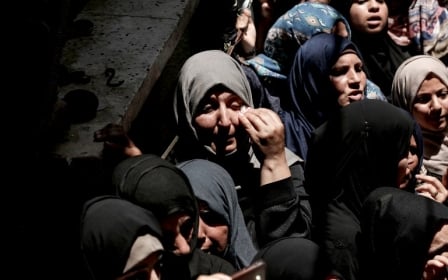