Seven-year-old Amal Hussain, the girl who became a symbol of Yemen's looming famine after a photo of her frail body appeared in the New York Times last week, died on Thursday.

The image, which was taken by Tyler Hicks, provoked a large reaction on social media, with some asking how they could help Yemen's beleaguered population and others calling on the international community to take action.

Hussain died of malnutrition and is the latest casualty in what the United Nations has called "the world's worst humanitarian crisis".

Since 2015, Yemen has witnessed a brutal war pitting Houthi rebels against a Saudi-led coalition fighting on behalf of the internationally recognised government, a conflict that has killed at least 56,000 people.

The seven-year-old was discharged last week from hospital, despite remaining unwell, in order to make room for new patients.

On Thursday, Hussain's family announced that she died in a camp for people displaced by the conflict, six kilometres away from the hospital where she was being treated.

Hussain's mother Mariam Ali, who is reportedly recovering from a bout of dengue fever, said she had been left heartbroken by the death of her daughter. Ali said she was unable to afford to take Hussain to a medical centre 24km away for further treatment.

"Amal was always smiling. Now I'm worried for my other children," she told the New York Times.

Touched by the story, many expressed both sympathy and anger over the child's death.

The world has failed Amal & all the Yemeni children like her. The U.S. will continue to have blood on its hands. Why would Amal - whose name in Arabic translates to hope - have any hope in the international community that’s killing her?

Amal Hussain, the emaciated 7-year-old who helped turn the world's eyes to the famine in Yemen, has died.

“My heart is broken,” said her mother, Mariam Ali, who wept during an interview. “Amal was always smiling. Now I’m worried for my other children.”https://t.co/Vw9Sw87SrY

There are currently 1.8 million severely malnourished children in Yemen, the UN believes.

At the end of last year, one aid agency estimated that 130 Yemeni children were dying every day due to starvation. Since then, conditions in the country have only got worse.

Even before the Saudi-led coalition intervened in 2015, Yemen was already the poorest country in the Middle East.

Since then, Yemen has been blighted by a Saudi-led blockade and bombing campaign, and a spiralling economic crisis. The rial has lost almost half of its value since 2015, sending prices of basic goods rocketing. A cholera epidemic has affected thousands.

Of Yemen's population of 30 million, 17 million are in desperate need of food aid. Seven million of those are at risk of a famine, which the UN has warned would be the worst the world has seen for 100 years. 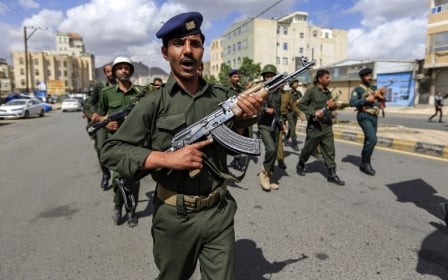 Yemen War
Washington calls for end to war in Yemen