In bipartisan decision, US lawmakers reject funds to be set aside in government's 2020 budget for White House peace plan The United States Congress has rejected a request from the White House for $175m in funds that would go towards pushing the Trump administration's Middle East "peace plan".

In a bipartisan decision on Monday, lawmakers rejected having funds be set aside in the government's 2020 budget.

In a section devoted to the Middle East, a Congressional document stated: "The agreement does not provide $175,000,000 for a Diplomatic Progress Fund, as proposed in the House report."

The Trump administration's "deal of the century" plan for the future of Israel and Palestine has faced one obstacle after another since inception, including a complete boycott by Palestinian officials.

The plan calls for $50bn in regional investments over 10 years, with $28bn going to the Palestinian territories - the Israeli-occupied West Bank and the Gaza Strip - as well as $7.5bn to Jordan, $9bn to Egypt and $6n for Lebanon.

The Trump administration says the money would help boost the Palestinian economy, creating one million jobs in the process.

The White House sent its initial budget proposal to Congress in March. At the time, it said the funds were needed to provide "flexibility" in Trump's Middle East policy, in the event of progress toward regional peace, Israeli newspaper Haaretz reported.

A congressional source, who was involved in the negotiations over the budget decision, told Haaretz that the rejection was not motivated by politics, but rather skepticism.

"One argument against it was, 'No one thinks this peace plan is coming out any time soon, so why devote money to it?’" the newspaper's source said, adding that "If it becomes serious, they [The White House] will find support for it. No one in Congress will stand in the way of a peace plan if it seems like it has a chance to succeed."

Since coming into office, the Trump administration has cut millions in aid to the Palestinian Authority, as well as to aid agencies working in the occupied West Bank, the Gaza Strip and Palestinian refugee camps abroad.

Trump has also made several pro-Israel policy changes, such as moving the US embassy from Tel Aviv to Jerusalem, recognising Israeli sovereignty over Syria's Golan Heights and providing a level of legitimacy to Israel's illegal settlements.

The US president has argued that his policies would bolster US-Palestinian ties eventually and pressure the Palestinian leadership to cooperate with Washington on the peace plan.

But Palestinians have flatly rejected any participation in the plan.

While details of some of the Trump administration's solutions for the economy of Israel and Palestine were released over the summer, the political part of the plan has yet to be released publicly.

In August, Trump said the rest of the plan would be rolled out after Israel’s 17 September elections, but those plans seem to be on hold, as Israel was unable to form a coalition government and instead awaits a third election in March.

With Washington already pulled into several crises across the Middle East, the likelihood of the plan being released before Trump stands for re-election in November 2020 is slim. 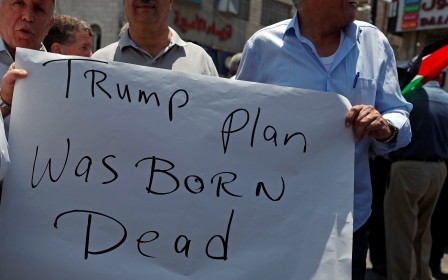