Coronavirus in Egypt: Unprotected and fearful doctors close to revolt

Twenty-five medical workers have died of Covid-19 in Egypt, and many of their colleagues are resigning or threatening to strike in protest 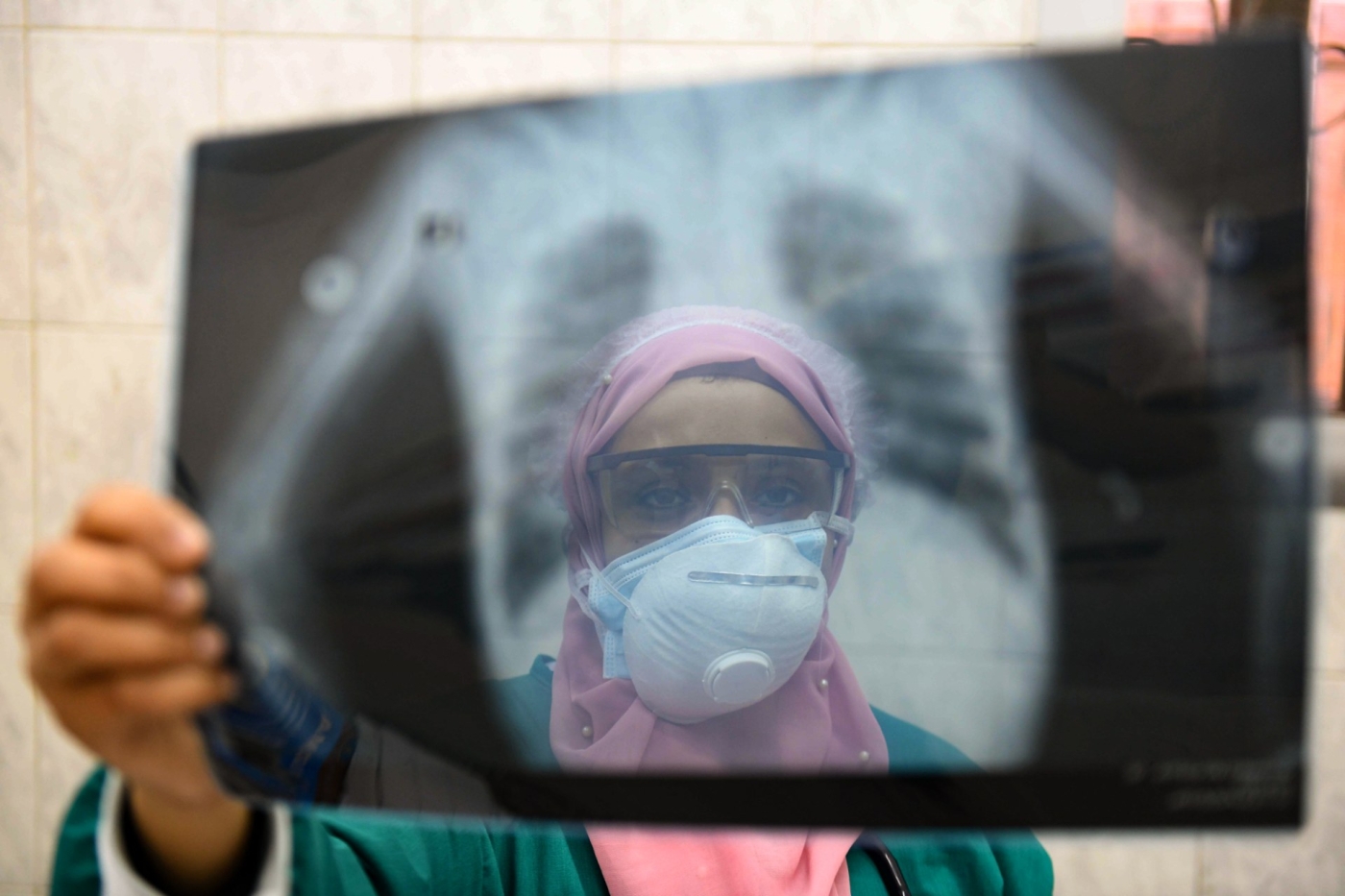 Shuttered shops and empty streets lie outside Cairo’s Abbasia quarantine hospital. Knowledge that it is treating hundreds of coronavirus patients has muzzled this usually bustling area.

A few of the hospital’s tired staff linger there, however, refuelling at the one or two remaining fast food restaurants.

Among them is Mohamed Abdel Latif, a 34-year-old respiratory doctor, taking a break to eat before covering for his colleague who was infected with coronavirus five days ago – one of a spiralling number of medical workers struck by Covid-19 in Egypt.

Sitting on the pavement, Abdel Latif partially moves his surgical mask to take a bite of his sandwich.

“There are around 20 people from my graduating class that have been infected so far. Others are thinking of resigning from working for the government and applying for a masters degree and leaving the country,” he told Middle East Eye.

'At the end of the day, if doctors decide to run away from this challenge, the country will literally fall into chaos'

“But at the end of the day, if doctors decide to run away from this challenge, the country will literally fall into chaos, and that is what the [health] ministry does not understand.”

Abdel Latif himself has had a brush with an infected colleague, but with state-administered tests simply unavailable for the majority of Egypt’s medical staff, the hospital management advised him to self-isolate for two weeks.

Instead of taking a healthy doctor away from the frontline, Abdel Latif paid 5,000 Egyptian pounds ($315) on two negative coronavirus tests, and got back to work.

“Luckily, my family can afford the tests at a private hospital. There are thousands of doctors who cannot,” he said.

So far, 25 medical workers have died after contracting coronavirus.

Scores of doctors across Egypt, including Abdel Latif, think the health ministry has made arbitrary decisions and failed medical workers with its lack of available testing and chronic shortage of protective equipment.

The UN, too, has called on the Egyptian government to dramatically scale up its testing.

The apparent failures have led to the mass resignations of physicians, and condemnations by the Egyptian Medical Syndicate, which accused the ministry of not protecting the country’s underequipped, overwhelmed and underpaid medical staff.

This discontent and threats of a strike have led pro-government media and officials to accuse doctors of sabotage. As is common with critics of the Egyptian government, they have been accused of being cells of the outlawed Muslim Brotherhood opposition group.

From White Army to Brotherhood

At the start of the crisis, medical workers were described as “Egypt’s White Army”.

Videos showed groups of doctors and nurses posing in hospitals and clinics, before cutting to footage of army and police personnel in security operations. Some included songs praising President Abdel Fattah el-Sisi.

In the media, column inches and TV reports were dedicated to glorifying medical workers.

However, hours after calls to strike and resign broke out, doctors, as well as the vocal Egyptian Medical Syndicate, suddenly found themselves under fire as “puppets of the Brotherhood”.

State-owned newspaper Al-Ahram singled out a doctor who resigned from Al-Munira hospital after his colleague died, condemning him as a Muslim Brotherhood member. Maysa Atwa, a member of the parliament's manpower committee, told MEE that “controversy about the doctors’ demands are incited and promoted by the terrorist Mulsim Brotherhood group”.

When asked for evidence that the group is behind the calls for a strike, the pro-government MP said: “Several of the accounts and affiliated websites of the terrorist group are giving the impression that the state does not appreciate and protect ‘Egypt’s White Army’ and that they [doctors] are abandoned by the people and the government.”

On the calls for strikes and resignations, Atwa said “they will be accounted for as acts of high treason”, adding that “serving the nation in such critical time is a patriotic role that nobody should abandon”.

A Medical Syndicate source dismissed accusations that the doctors are “controlled by the Muslim Brotherhood”, and said they are not new.

“The state uses them [the accusations] to discredit any criticism, even though this criticism is for the sake of citizens,” the source told MEE.

“The doctors’ demands are valid and not politicised. We need protection, PCR [Covid-19] tests, areas for quarantine, and it is normal to prioritise medical workers because one sick doctor can infect dozens of patients and dozens of their colleagues.”

The source said the current situation is dire and hospitals are nearly full.

“Several hospitals are sending away patients, not because of the ministry’s ‘no tests’ protocols but because there are no beds,” he said.

“We are asking the government and the people to think in a pragmatic way. If a big number of the doctors get infected, who will treat us if we are sick?”

For a senior doctor in Dmerdash general hospital, a strike is the least of the government’s problems.

“The real danger is that doctors may stop showing up, either because they are dead, sick, or afraid of attracting the virus,” the doctor told MEE, speaking on condition of anonymity due to the sensitivity of the subject.

'The real danger is that doctors may stop showing up, either because they are dead, sick, or afraid of attracting the virus'

He warned that there was also a real risk that hundreds of recently graduated medics, who are automatically distributed to the country’s governmental hospitals, “may decide not to show up to protect themselves and their families amid these obscene conditions that we are seeing”.

“As for the ones currently working, they will abandon their posts when they see that the government cares more about testing TV celebrities, MPs and members of the judiciary,” he added.

Samia, a 29-year-old doctor in the Agami hospital in Alexandria, told MEE: “Doctors do not want songs, promos and slogans calling them ‘an army’ because they are doing their job while being underpaid and overworked. They need physical protection, which is a crucial part of defeating the virus.”

She deplored the state’s “stunts” of sending masks and personal protective equipment (PPE) to the US, UK and Italy, while she and her colleagues are buying the same gear from the internet and the black market.

“We get issued two surgical masks per day and some gloves. Some patients own N-95 masks and we don’t,” she said.

“How come the state, which is so poor and ill-equipped to handle the virus, where nurses and doctors have to wear trash bags to protect themselves, give PPE for free to the government’s richest allied countries?” she asked.

'If the government continues to ignore the demands of the doctors and pursues its steps to open up, panic and chaos will take place as the hospitals will be overrun'

With the number of confirmed cases in Egypt exceeding 19,000, presidential adviser for health affairs Mohamed Awad Tageldin predicted the outbreak will peak in two weeks.

For now, the country is attempting to open up some tourist hotels, factories, courts, and public and private institutions.

Egyptians have in turn begun to relax their own precautions, with many ignoring social distancing measures and violating curfews. Shops, banks, restaurants and malls are starting to see crowds return.

Meanwhile, in the city of Fayoum, another senior doctor said he and his staff have to turn away dozens of people, including medical workers in the hospital he works at, on a daily basis. The hospitals are simply too full, he said.

“If the government continues to ignore the demands of the doctors and pursues its steps to open up, panic and chaos will take place as the hospitals will be overrun, which will lead to violence and nepotism,” he said.

“All the military equipment and soldiers in the world will not matter if you don’t have a healthy doctor to treat them when they can not breathe,” he added.

“By this rate, we will have to choose who to remove from the ventilators and who to keep alive.“ 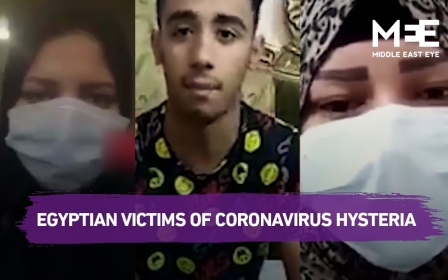