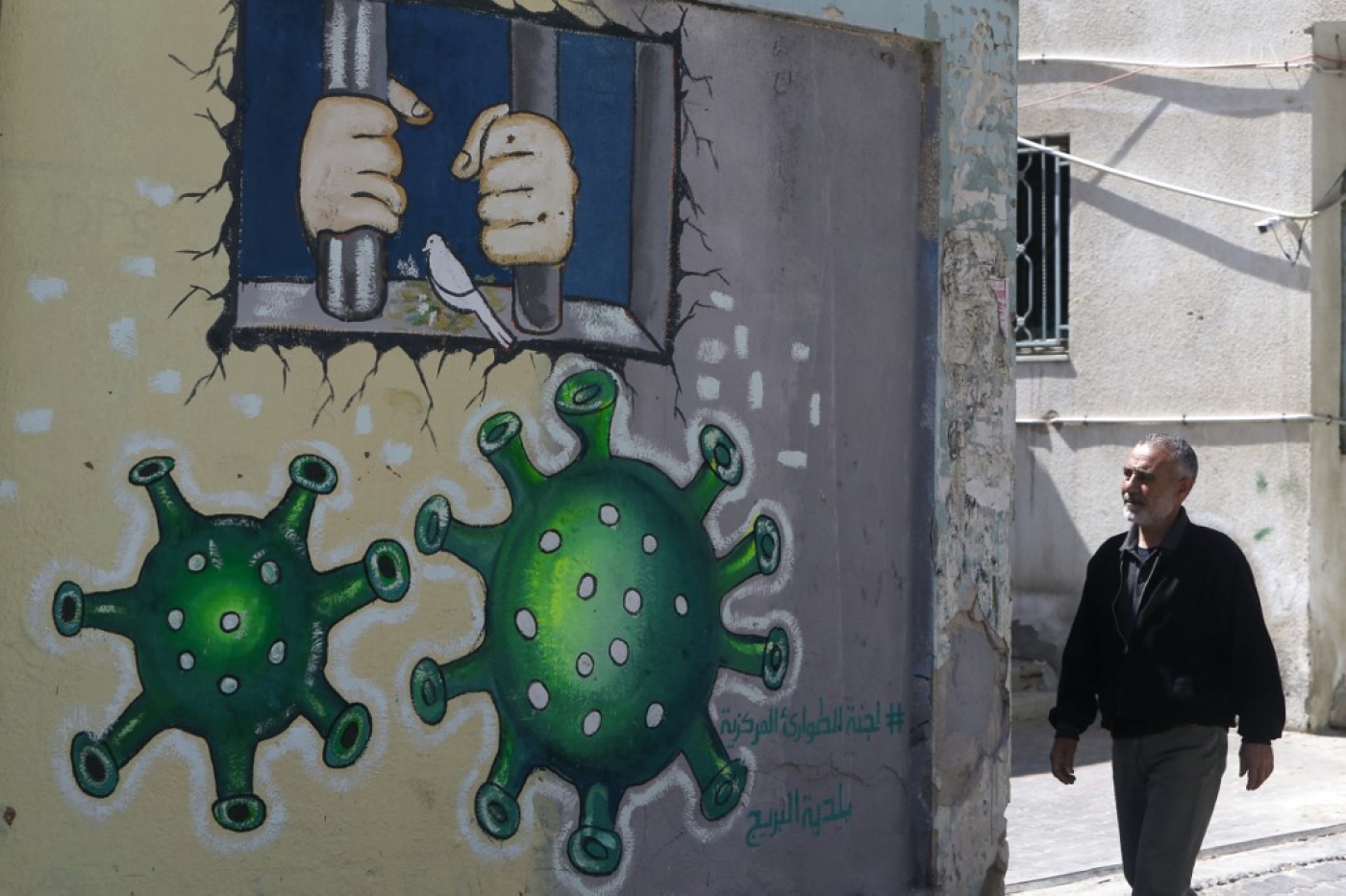 A Palestinian man walks past a mural depicting the coronavirus and a prison cell in Gaza City (AFP)
By
Shatha Hammad
in
Ramallah, Occupied West Bank

Shorouq Dawayyat is serving a 16-year prison sentence in an Israeli jail.

During her arrest, back in 2015, the 24-year-old Palestinian had suffered a serious chest injury, which led to a major artery being ruptured and several operations. Five months ago, she suffered bruises during a crackdown by Israeli prison guards.

Then came the news on 23 September that an Israeli nurse working in Damon Prison, where Dawayyat is being held, had tested positive for coronavirus.

The young woman from the village of Sur Baher, just outside occupied East Jerusalem, along with three other female Palestinian prisoners - Ansam Shawahna, Amani al-Hashim and Layan Kayed - who had been in contact with the nurse, were put into quarantine.

'I have not been able to sleep or eat for five days. All I think about is Shorouq and her health'

“I have not been able to sleep or eat for five days," said Dawayyat’s mother Samira, 50, who had heard the news about her daughter on a local radio station and then via social media, told Middle East Eye.

"All I think about is Shorouq and her health, and there is no way to obtain any information about her to ensure that she is well, safe and sound."

Dawayyat's mother says she is afraid that her daughter could become infected from jail staff who move in and out of the prison.

“I have visited Shorouq twice since the spread of Covid-19, and the last visit was in July. Ever since, there has been no communication at all.”

According to a statement issued by the Ramallah-based Palestinian Prisoners’ Club on 27 September, 31 prisoners in Israel’s jails had been infected with the coronavirus, including two detainees whose infection was only discovered a day after their release.

Now there are concerns that the Israeli authorities are using the pandemic as a tool of suppression against, and to create fear among, Palestinian prisoners.

Amani Sarahneh, media coordinator at the Palestinian Prisoners' Club, told MEE that the prisons had failed to provide even the minimum preventive measures at the beginning of the epidemic’s spread, such as masks and sanitisers.

These had only been provided later after Palestinian and international organisations had put huge pressure on the prison authorities, he said.

He also said that the prison had only provided sanitising materials to the wards housing prisoners suspected of having had contact with infected prisoners.

The prison administration had also reportedly reduced the amount of fruit, vegetables and sanitiser available in the canteen. The fears of Dawayyat’s mother are only too familiar to the family of Muhammad Basim Zaid.

The 31-year-old father of two was arrested on 10 September at a checkpoint near the city of Qalqilya in the occupied West Bank and transferred to Ashkelon Prison.

Five days after his arrest, his family was informed that he had been infected with the coronavirus.

Zaid was being denied access to his lawyer and prevented from contacting his family, according to his family. His family also said that the prison authorities were continuing their investigation of Zaid, despite his illness.

“He had two court hearings and his detention was extended pending investigation.”

The family is convinced that Zaid had been infected after his arrest. The last time he had been tested was on 28 August, when the results were negative and he was not showing any symptoms of coronavirus.

“We live in a state of extreme fear and anxiety for Muhammad. We only ask for information about his health,” Wissam Zaid told MEE.

Despite the spread of the pandemic in the occupied territories since March, the Israeli army has continued its arrest of Palestinians, transferring them to detention and investigation centres that lack basic facilities to protect against coronavirus infection.

Sarahneh said that the Etzion and Hawara interrogation centres were among the worst, in which the Israeli army practised serious violations against prisoners.

“These two centres are not suitable for human life, but the prison administration uses them as quarantine places for a period of 14 days and places large numbers of new prisoners in the same rooms before they transfer them to other prisons,” Sarahneh said.

He also said that most of the infected prisoners found in the Ofer prison on the West Bank had previously been at interrogation centres, especially Etzion, Hawara, al-Maskobiya, and Ashkelon.

But getting a clear picture on the true state of coronvirus infections inside Israel’s prisons is difficult.

The authorities keep information related to the incidence of Covid-19 inside prisons confidential, as well as the results of any testing.

As a consequence, Palestinians are suspicious of any figures that are released.

According to testimony from one group of detainees, the prison authorities transferred a group of prisoners to quarantine but documented only one or two infections in the records they released.

Sarahneh also claimed that, according to Palestinian prisoners, the Israeli interrogators were using the threat of exposure to Covid-19 infected prisoners as a tool to pressure detainees during interrogations.

“The prison administration deliberately misleads us regarding the spread of the pandemic inside prisons,” Sarahneh told MEE.

Israel's spokesperson for prison services had not responded to requests for comment regarding the allegations at the time of publication.

The pandemic has also given Israeli authorities an opportunity to inflict further punishment on Palestinian prisoners and increasingly curtail their rights, according to Sarahneh.

“The prevention of visitation has had a major effect on the prisoners, as they are deprived of family visits and the money transferred to them to buy what they need from the prison’s canteen,” he said.

“Prisoners have also been placed in double isolation due to the suspension of visits and the complete cut off of communication.” In April, a group of UN human rights experts had called on Israel "not to discriminate against" thousands of Palestinian prisoners facing high-risk exposure to coronavirus, asking the country to release the most vulnerable among them.

There were more than 4,520 Palestinian prisoners, including 183 children, 43 women and 700 detainees with pre-existing medical conditions in Israeli jails, the UN experts added.

In its statement, the UN said Israel had released hundreds of Israeli prisoners due to the pandemic, but refused to release any of its Palestinian inmates.

"This indicates discriminatory treatment towards Palestinians prisoners - which would be a violation of international law," the UN group said.

Today, with the coronavirus pandemic still pervasive, families of Palestinians held in Israeli prisons can only pray for their loved ones’ safety. 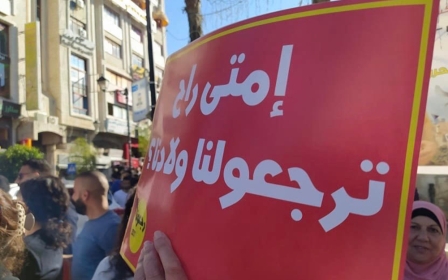